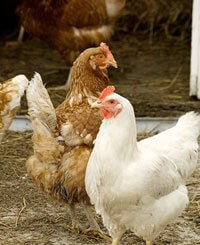 Before PETA existed, there were two important things that you could do if you wanted to help animals. You could volunteer at a local animal shelter, or you could donate money to a humane society. While many of these organizations did useful work to bring comfort to animals who are used by humans, they didn’t question why we kill animals for their flesh or their skins or why we use them for tests of new product ingredients or for our entertainment.

PETA’s founders sought to give caring people something more that they could do and to provide them with ways to actively change society. They wanted to show how easy it is to go vegan and shop cruelty-free. They wanted to protest, loudly and publicly, against cruelty to animals in all its forms, and they wanted to expose what really went on behind the very thick, soundproof walls of animal laboratories.

PETA’s first case—the precedent-setting 1981 Silver Spring monkeys case—resulted in the first arrest and criminal conviction of an animal experimenter in the U.S. on charges of cruelty to animals, the first confiscation of abused laboratory animals, and the first U.S. Supreme Court victory for animals in laboratories. And we haven’t stopped winning in our efforts for animals since.

Every year, with the help of generous supporters, PETA is able to secure victories for animals. And every victory is important and celebrated, from the smallest mouse spared a horrific death in a glue trap to the thousands of cows, pigs, chickens, and fish whose lives are spared every time someone goes vegan.

The following are just a few of PETA’s major accomplishments for animals:

PETA has made groundbreaking advances for animals who are abused by corporations, governments, and individuals throughout the world, and these successes have led to dramatic improvements in the lives of millions of individual animals.

Whether by working with universities and government institutions to implement animal-free test methods, sparking a boom of “cruelty-free” product marketing and a nosedive for the U.S. fur industry, or promoting the mass availability of vegan meat at grocery stores and gourmet restaurants, PETA has been the driving force behind many of the largest successes for animals. Read more about PETA’s success stories.

Help Us Continue Our Groundbreaking Work for Animals

Read How You Can Help Free Animals