From the time we’re young, most humans are conditioned to view certain species as worthy of care and compassion and others as unworthy—all based on arbitrary human preferences. Intentionally or not, parents, teachers, the media, and other influences send children the message that puppies and kittens are friends, cows and chickens are food, and rats and mice are pests. Most children are also taught that human desires, needs, and interests always trump those of any other species. This is called speciesism, the misguided belief that one species is more important than another, and it results in all kinds of negative consequences. But although most of us were taught to think that way, speciesism can also be unlearned. After all, we aren’t born with an innate understanding of this human-made hierarchy of species. Speciesism is a social construct, much like racism, sexism, ableism, homophobia, and other harmful forms of discrimination designed to benefit those in power. In other words, through education, we can teach ourselves and our students to recognize and reject speciesism, starting with the media we consume. Use the following lesson to help students in grades 6 through 12 unlearn speciesism and acknowledge animals’ rights and to address the following Common Core Learning Standards for Speaking & Listening:

If you’re teaching virtually, students can still complete the activities using popular online conferencing tools like Zoom or Skype. If these tools aren’t available to you, you could have students respond to the discussion questions in an online forum, such as Google Classroom. Designate a time frame during which students are to post their responses. Then, have them give a thoughtful reply to at least three of their classmates’ posts. Continue reading for more tips on adapting this lesson for distance learning.

Have students watch the following video of a young girl explaining to her mother why she refuses to eat animals.

Use these questions to discuss the video as a class:

*You can define empathy as “the ability to understand how someone else feels in a certain situation.” For example, the girl in the video has never been killed and eaten, but she’s able to imagine how horrible that must be for animals—she’s able to empathize with them.

There are many other thought-provoking videos showing young children explaining why they refuse to eat animals. If there’s time, you and your students can check out a few here.

Divide students into four groups or create four separate threads in your online forum of choice. Assign each group one of the following animals:

Have each group find three to five examples of advertisements for foods made of or using their  assigned animal. If you’re teaching virtually, give students at least a couple of days to find and gather their examples. The ads may be in print or digital format. Here are some examples:

In their groups, have students go through the Media Education Foundation’s steps for deconstructing an advertisement. Have them answer the questions provided as well as the following questions.

Step 2: Determine the Purpose of the Ad

Step 3: Determine the Assumptions the Ad Makes and the Messages It Sends

Step 4: Consider the Possible Consequences of These Messages

Have each group pick one ad to share with the class—ideally the one that sparked the most discussion among members. Have a spokesperson from each group brief the class on the group’s responses to the discussion questions above, noting any disagreements or relevant observations that members had. If you’re teaching virtually, have each group work together to write a brief summary of their discussion and post it to the main thread. Have students from other groups post thoughtful responses.

Next, have students read “Down on the Farm: Where Meat, Eggs, and Milk Come From” mini books and answer the questions at the end. Discuss responses as a class. 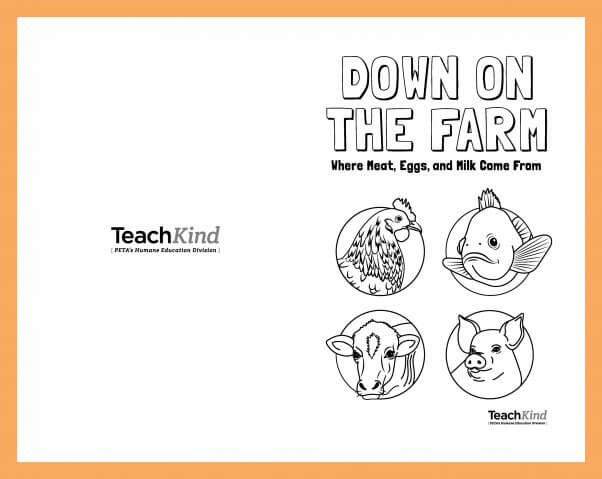 In their groups, have students analyze the ad that they presented to the class, now knowing what animals raised and killed for food often endure. Ask them to consider why advertisers depict animals in picturesque pastures rather than in slaughterhouses—or don’t depict them at all. Introduce students to the idea of the “absent referent,” a concept explored by Carol J. Adams in The Sexual Politics of Meat: A Feminist-Vegetarian Critical Theory. Define the absent referent as “the death of the animal whose place the meat takes.” In other words, when someone refers to their meal as “a hamburger” as opposed to “cow flesh,” the absent referent is the cow who was killed. Meat-eaters use the absent referent—often unknowingly—to avoid making the connection between the food that they consume and the living, feeling individual who died and became meat. Ask each group to determine whether their ad has an absent referent, and if so, have them identify it.

You may wish to expand your discussion of the absent referent into a full lesson on the psychological phenomenon known as cognitive dissonance and “the meat paradox.” While a lesson about this can be uncomfortable, it can be used very effectively in the classroom to help students reflect on, understand, and change their own beliefs and behavior. Studies show that cognitive dissonance can be used to foster prosocial behavior and promote change.

Cognitive Dissonance and How We Treat Animals (Grades 6-12)

To close the conversation, discuss the following questions as a class:

Point out to students that the meat, dairy, and egg industries are just three of many that use speciesism to make money by using and abusing animals. Define speciesism as “the idea that humans can treat some animals one way and others a different way simply based on their species” (which, of course, is wrong). Ask students to consider if a similar way of thinking would be right under other circumstances. For example, would it be acceptable to hurt someone because they are short, have brown eyes, or are left-handed? Of course not. Just as these traits aren’t good reasons to take advantage of others, species isn’t, either. Provide students with the following examples of speciesism and ask them to think of times they’ve experienced speciesism in their lives:

Remind students that whenever they’re assessing the validity of any kind of media, it’s important to ask the following questions:

Thinking critically and asking questions about the media they consume is just one of the many ways we can teach our students to challenge the assumptions they’ve held about animals for much of their lives and to take steps toward rejecting speciesism. Students who are taught empathy for animals tend to demonstrate empathy for their peers, so by incorporating lessons in compassion, respect, and equality for all living beings—regardless of their species—into your curriculum, you’ll be broadening your students’ understanding of social justice.