Raccoon Appreciation Day should be every day of the year!

These animals are undeniably resourceful and, as this raccoon mom goes to show, also clever, caring, and courageous:

But there’s one big problem that raccoons (as well as other wildlife) face every day: TRASH. 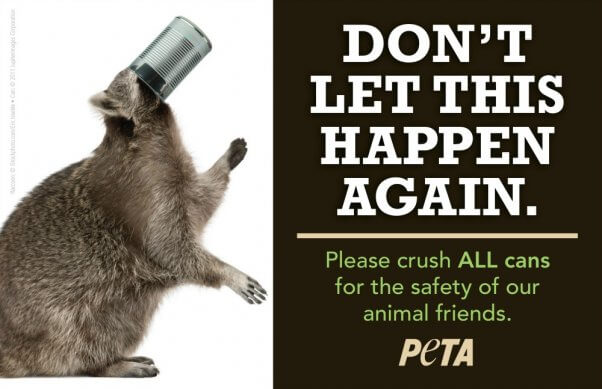 Animal control, the police, first responders, and good Samaritans have all had to come to the rescue of raccoons who have managed to squirm their way into a can or bottle, only to find that there isn’t a way to squirm back out.

Litter is a huge danger to animals such as raccoons.

This discarded mayonnaise jar became a death trap for a curious raccoon:

As if you needed another reason to ditch mayo! (And check out all these egg-free, vegan varieties. The jars, though, should still be washed out and properly disposed of once you’re done enjoying the vegan mayo.)

And this metal can became firmly stuck on a raccoon’s head:

These two raccoons were lucky enough to have good Samaritans rescue them—but for untold numbers of other animals, litter can be a death sentence.

Just recently, viral photos of a kitten stuck in a plastic six-pack ring showed the damaging effects that rubbish can have on animals.

But you can help!

Hungry animals desperate for even just a few crumbs often get their heads stuck in discarded cans, cups, and jars.

Always rinse out containers (and place the lids back on them!) and crush metal cans before disposing of them.

Securely cover garbage cans and recycle bins so that animals can’t get into them and become trapped inside. And don’t forget to keep an eye out for other people’s trash, too. Your actions could be the difference between life and death for an animal.