Celebrate Voktoberfest at Home With These Authentic German Recipes

Making your own Voctoberfest (vegan Oktoberfest) at home is a fun way to try new recipes to serve alongside your favorite vegan-friendly German beers. While Oktoberfest cuisine is typically known for being heavy on the meat, we’ve found authentic German recipes that leave out the animal suffering. In fact, some of these recipes are so authentic that they’re in the original German! However, you can easily translate them with just a click using Google Translate, and it’ll be totally worth it for that true Oktoberfest taste.

Here’s how you can plan the best vegan Oktoberfest at home:

Oktoberfest is well known for being a time to enjoy cold German beer. Most beer is vegan, including many kinds made in Belgium and Germany, in part because of strict purity laws that limit the ingredients these beers can contain, including animal-derived substances such as gelatin. However, it’s always best to check Barnivore to make sure. Two brands we suggest are Beck’s and Schlenkerla. You can also consult our vegan beer list. (Just remember always to drink responsibly and only if you’re of legal drinking age.)

Sausage is one of the traditional Oktoberfest dishes, usually served with mustard, beer, and pretzels. Beyond Sausage Brat Original, Field Roast Bratwurst Sausage, and other vegan sausage brands are great in a pinch, but making your own from scratch is very rewarding. This Thüringer Brat is made from vital wheat gluten, beans, and tons of seasonings that give it a smoky taste. Or try this Weißwurst made from tofu, which we’ll take over one made from pigs or baby cows any day.

You can make vegan schnitzel with anything from tofu to portobello mushrooms or use a breaded vegan cutlet such as Gardein’s Turk’y Cutlets.

Many store-bought soft pretzels are “accidentally vegan”—just be sure to check the label for ingredients like eggs before you buy. You can also make your own with this recipe for Vegan Soft Baked Pretzels.

Other German Dishes for Vegan Oktoberfest

Everyone loves a bread bowl, and this one is filled with a beer cheese soup that’s a bit healthier than those made with cow’s milk cheese, since it’s made from vegetables. Make mini bread bowls to enjoy this as an appetizer, or have it the medieval way—for breakfast!

Lighter than American potato salad, the Bavarian version uses a broth, oil, and vinegar dressing rather than mayonnaise. 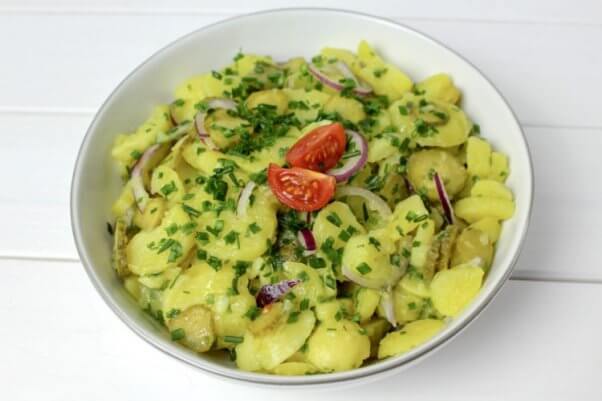 Soft bread dumplings smothered in a creamy mushroom sauce are warming and hearty, and they wash down well with a cold lager.

Spätzle is very similar to noodles or small dumplings, and it’s wonderful in a variety of sauces. This recipe features a cheesy pesto sauce and caramelized onions.

A post shared by Eat this! / Vegan Foodblog (@eatthisorg)

Obazda is a cheese spread traditionally served on a Bavarian snack plate (think charcuterie board), but this version is made from sweet potatoes.

This refreshing radish salad is the perfect dish to accompany richer dishes like sausage and schnitzel.

Kneading the cabbage with salt makes this salad light and juicy. 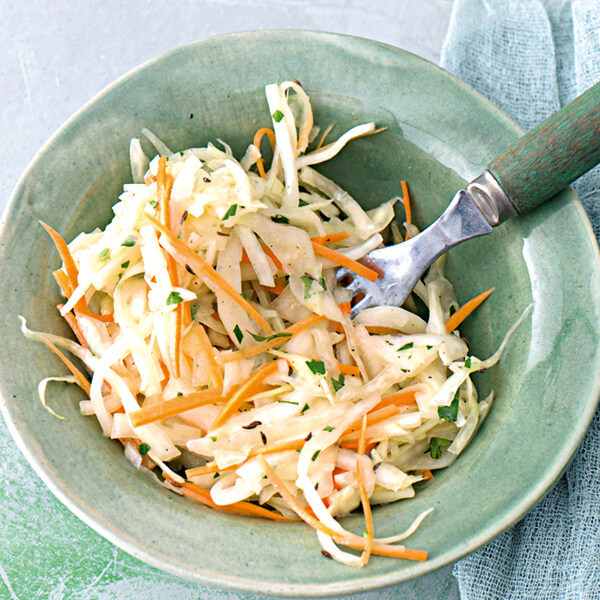 Toast your pretzels and serve them in this simple, filling salad.

For dessert, try this recipe for kaiserschmarrn, a fluffy, shredded pancake with fresh plums and raisins.

Paper-thin dough is the key to this decadent apple strudel, served with a thick vanilla sauce. 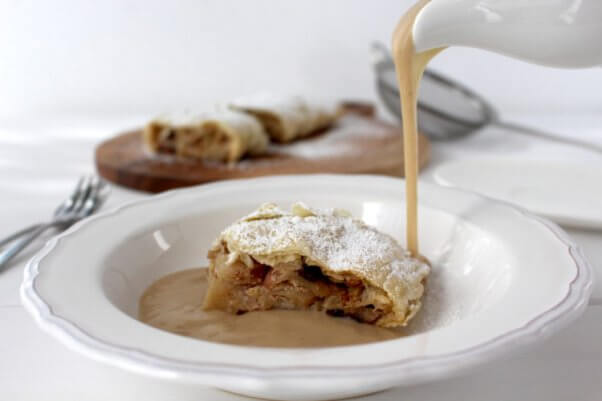 When you eat vegan meals, you spare animals immense suffering in the meat industry, which squeezes mother pigs into narrow metal stalls barely larger than their bodies. Pigs’ tails are chopped off, their teeth are cut with pliers, and males are castrated—all without painkillers. With pig-friendly vegan options for everything from sausage to schnitzel, it’s never been easier to celebrate a hearty Voktoberfest. By going vegan, you’ll save more than 200 animals a year, and it’s the best way to combat climate change and improve your personal health.