Top 10 Reasons to Not Eat Salmon

Our finned friends may not look like us, but we are more similar than you’d think. Fish have long-term memories, complex social lives, and advanced cognitive abilities. They use tools, communicate with their own language of sounds, and can even recognize patterns that help them navigate through the water. Salmon remember the water chemistry along the paths that they take when they head downstream to the ocean—years later, they can retrace these routes by following the distinct odor signature of their home streams. These amazing animals deserve your compassion and consideration, not your fork.

Here are more reasons why you shouldn’t eat salmon:

Fish are smart. Oxford University scientist Dr. Theresa Burt de Perera recently discovered that fish learn even faster than dogs. Fish learn from each other, have long-term memories, and can recognize one another. They gather information by eavesdropping, and some species even use tools, which, until recently, was thought to be a uniquely human trait. Like the dogs and cats with whom we share our homes, they also like to play, investigate new things, and hang out with friends. 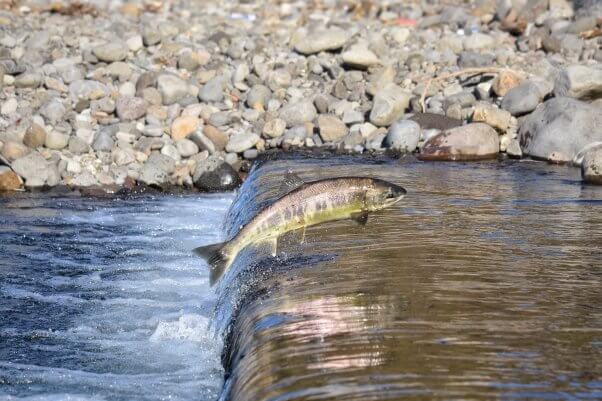 Mmmm, want a plate full of poison? Fish have extremely high levels of chemicals such as arsenic, mercury, PCBs, DDT, dioxins, and lead in their flesh and fat. You may even get industrial-strength fire retardant with that catch of the day. The chemical residue found in salmon flesh can be as much as 9 million times that of the water in which they live.

Four-fifths of the United States’ most popular fish flesh, salmon, consumed in the U.S. is farm-raised. These fish, who are raised by the millions in cages made of nets in coastal waters, are killing off wild fish populations as well, since it takes 5 pounds of commercially caught fish (species not eaten by humans) to produce 1 pound of farmed fish.

No one wants to wear a “death crown,” but thanks to chronic sea lice, a parasite that eats down to the bones on a fish’s face, salmon commonly suffer this condition. Salmon also routinely go insane and sustain sores and other injuries from intense crowding, as they are made to live their entire lives with as many as 27 fish in a space the size of a bathtub.

No, we’re not talking about a baseball player-but fish farmers do often use bats to beat large salmon to death.  All methods used to slaughter fish are grotesque and cruel. Fish have their gills slit while they are still alive, and smaller salmon are often packed in ice and left to slowly suffocate or freeze to death.

Everybody loves the Big Apple, but would you eat something fished out of the city’s sewer system? According to the Norwegian government, the salmon and trout farms in Norway alone produce roughly the same amount of sewage as New York City. The massive amount of raw sewage, dead fish corpses, and antibiotic-laden fish food sludge settling below farmed salmon cages can actually cause the ocean floor to rot, destroying vital habitat for the already strained marine ecosystem and turning coastal waters into open sewers. 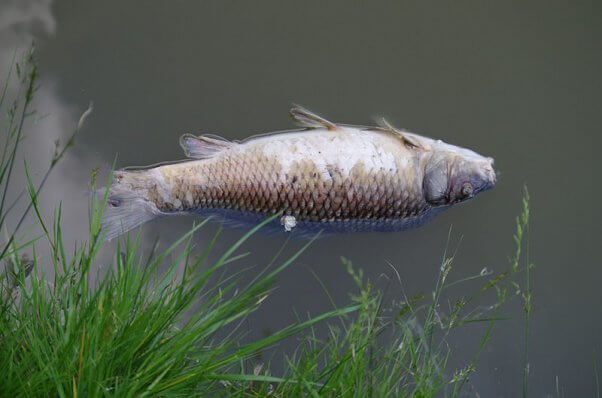 Usually when Moms pass things on to their children, it’s a good thing-but when pregnant or nursing moms eat fish, they pass the toxins they consume on to their babies. Studies have also shown that children born to mothers who eat fish are slower to talk, walk, and develop fine motor skills and have weaker memories and shorter attention spans. Scientists at the Harvard School of Public Health have found that fish consumption can cause irreversible impairment to brain function in children, both in the womb and as they grow.

8. Don’t Forget About the PCBs

Feeling forgetful? There could be something fishy going on. Scientists have proved that people who eat only two servings of fish a month have difficulty recalling information that they learned just 30 minutes earlier. The culprit is high levels of mercury, lead, and PCBs in their blood. PCBs, synthetic chemicals polluting water and concentrated in fish flesh, act like hormones, wreaking havoc on the nervous system and contributing to a variety of illnesses beyond forgetfulness and vertigo, including cancer, infertility, and other sexual problems. 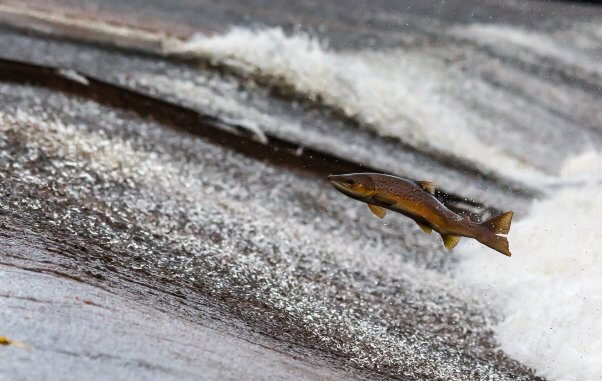 Would you like tartar sauce with those cancer-causing toxins? If you’re feeling green around the gills, salmon could be making you seriously ill. The Environmental Working Group estimates that 800,000 people in the U.S. face an excess lifetime cancer risk from eating farmed salmon. Plus, salmon flesh contains high amounts of artery-clogging cholesterol and fat.

Tempt your taste buds without harming salmon by choosing vegan seafood instead. These options are becoming increasingly easy to find in your local grocery stores and from online vegan retailers, and they pack tons of flavor without any of the cruelty, contaminants, or cholesterol. There are even plenty of delicious vegan salmon recipes out there, along with innovative new products like Vegan ZeaStar’s Zalmon Sashimi.

If you’re fishing for a way to help animals while having a positive impact on the environment and your own personal health, going vegan is the best thing you can do. Order a free vegan starter kit and we’ll send you great-tasting recipes, nutrition information, and everything else that you’ll need to make a change: