Is the flesh of salmon pink? Well, let’s just say that the next time you ask your parents to buy you a salmon-colored sweater for your birthday, you should specify what you mean, because four-fifths of the salmon flesh consumed in the U.S. isn’t naturally pink—it’s gray. Plus, color is probably the least interesting thing about salmon. If we want to attribute characteristics to these fish, we should note that they’re sensitive, communicative, and fast learners with good memories.

How Do Farmers Make Salmon Pink?

Since consumers don’t want gray salmon, farmers feed these fish a supplement called astaxanthin, which gets absorbed into their flesh and makes them pink. Wild salmon get astaxanthin from their natural diets—but farmed salmon are denied everything that’s natural and important to them and are given only a highly processed feed that may contain shrimp-industry waste products or even petroleum-based coloring to make their flesh resemble that of their wild counterparts. According to Clean Plates founder Jared Koch, regarding synthetic astaxanthin, “[W]e don’t know if it’s healthy, and it may be harmful.” Read on before you opt for wild-caught fish, though, because it has its own slew of problems. 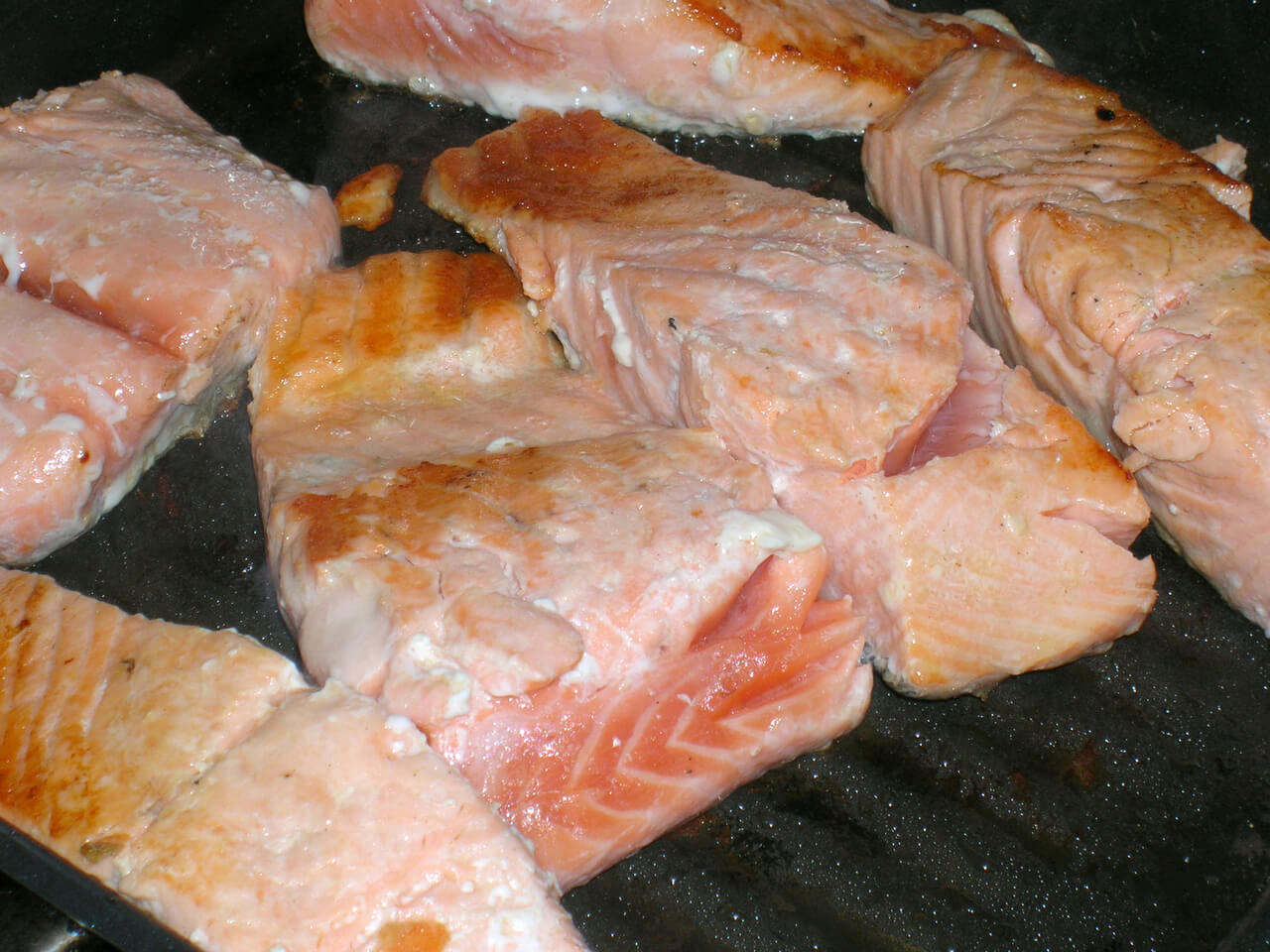 Dye to Make Salmon Pink Is Hardly the Worst Part

On salmon farms, thousands of fish are crammed into small pens, so the water is always dirty, and diseases, infections, and parasites spread. Farmers add antibiotics to the water, which the fish ingest, absorb, and pass on to those who eat them. Wild fish also absorb chemicals from the water they live in, and fish flesh and fat can contain extremely high levels of toxins such as arsenic, mercury, PCBs, DDT, dioxins, and lead. You may be chowing down on fire retardant in your salmon patty. The chemical residue found in salmon flesh can be as much as 9 million times more concentrated than that of the water in which they live. 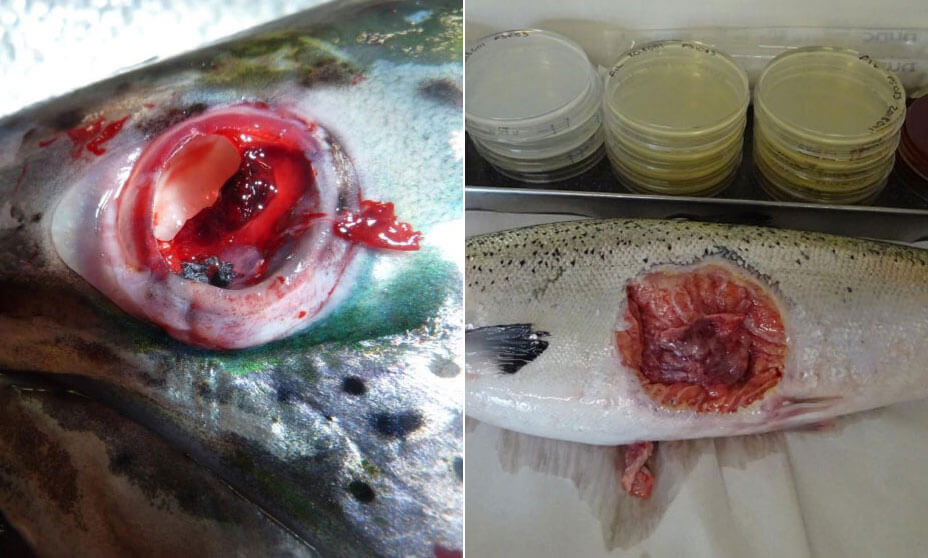 You are what who you eat—and what they eat—which, along with pesticides and antibiotics, according to Quartz.com, is a “kibble made from a hodge-podge that might include oil and flesh of smaller fish … corn gluten, ground-up feathers, soybeans, chicken fat, genetically engineered yeast.” That doesn’t sound very tasty, and no brand of salmon feed is complete without a dose of astaxanthin. Fish farms try to use just the right amount to make dead fish bodies look palatable, and one fish-feed company even offers a sort of color wheel to show how the amount of the chemical will affect the color of salmon.

Salmon farmers treat fish like they’re cans of paint that need to be mixed—not individuals who are capable of learning and remembering and who talk to each other using squeaks, squeals, and other low-frequency sounds that humans can hear only with special instruments.

Would you like a side of salmon with your worms? Stories of people finding worms wiggling in their salmon aren’t rare—just search YouTube. And we’re not picking on salmon—biologists in Denmark found that a whopping 90% of certain types of wild fish were infected with nematode larvae (aka “roundworms”). Some people have even contracted flesh-eating bacteria, which can be fatal, from uncooked fish in sushi.

Perhaps companies should list worms on the label for salmon, because data cited by the BC Centre for Disease Control suggest that 75% of wild Pacific salmon are infected with anisakid nematodes, and in another study, researchers in Alaska found nematode infestations in every single fresh-caught salmon they examined.

When pregnant or nursing moms eat fish, they can pass toxins such as mercury on to their babies, which can be detrimental to their development. Studies have shown that children born to mothers who ate a lot of fish are slower to talk, walk, and develop fine motor skills, and they have weaker memories and shorter attention spans. Harvard School of Public Health scientists found that mercury contamination of fish can cause irreversible impairment to brain function in children, both in the womb and as they grow.

Eating salmon is also deadly to other sea life: Sea turtles, birds, seals, whales, sharks, and “nontarget” fish who get tangled in nets and hooked by longlines are considered “bycatch” and thrown overboard. They fall victim to swarming birds or slowly bleed to death in the water.

Eating Fish Is Simply Not Safe for You or the Environment

It’s not just pregnant or nursing mothers who need to steer clear of both farmed and wild-caught salmon. Scientists have proved that people who eat only two servings of fish a month have difficulty recalling information that they learned just 30 minutes earlier. This is because of the high levels of mercury, lead, and PCBs in their blood. PCBs are synthetic chemicals polluting water that become concentrated in fish flesh. They act like hormones, wreaking havoc on the nervous system and contributing to a variety of illnesses in addition to forgetfulness, including cancer, infertility, and other problems.

Fish farming also wreaks havoc on the environment. Salmon farms in British Columbia were found to be producing as much waste as a city of 500,000 people. To put it in perspective, a 2-acre salmon farm produces as much waste as Sedona, Arizona. The Norwegian government says that its salmon and trout farms alone produce roughly the same amount of sewage as New York City! Fish farms are, essentially, a perpetually turned on tap releasing a slurry of raw sewage, dead fish, and antibiotics from fish food into the ocean. The revolting and constantly flowing sludge settles below farmed salmon cages and causes the ocean floor to rot—which destroys marine ecosystems.

You can now watch Seaspiracy (from the creators of Cowspiracy) on Netflix to learn about the way eating sea animals is devastating our ocean and water supply and, ultimately, our planet.

No animal deserves to spend their life in a severely crowded, disease-ridden pen. Yet 80% of salmon consumed in the U.S. come from massive farms. These fish are kept by the thousands inside netted cages in coastal waters or in land-based “ponds.” A single sea pen is only about 60 to 100 square feet and 100 feet deep, yet 50,000 to 90,000 fish are crammed into one.

When fish farmers decide that it’s time for the animals’ miserable lives to end, they use slaughter methods that are grotesque and cruel. Farmers slit the gills of fish while they’re still alive and pack smaller salmon in ice and leave them to suffocate or freeze to death slowly.

The real issue isn’t that salmon are fed dye or that eating their flesh can poison humans—it’s that humans are eating salmon. These animals are smart, sensitive beings who can feel pain (fish 👏 can 👏 feel 👏 pain 👏) and experience a wide range of emotions. They can remember the water chemistry along the paths that they take when they swim downstream to the ocean. Years later, they can retrace these routes by following the distinct odor signature of their home streams. In general, fish have long-term memories, complex social lives, and advanced cognitive abilities. They recognize and learn from each other, use tools, and communicate with one another. 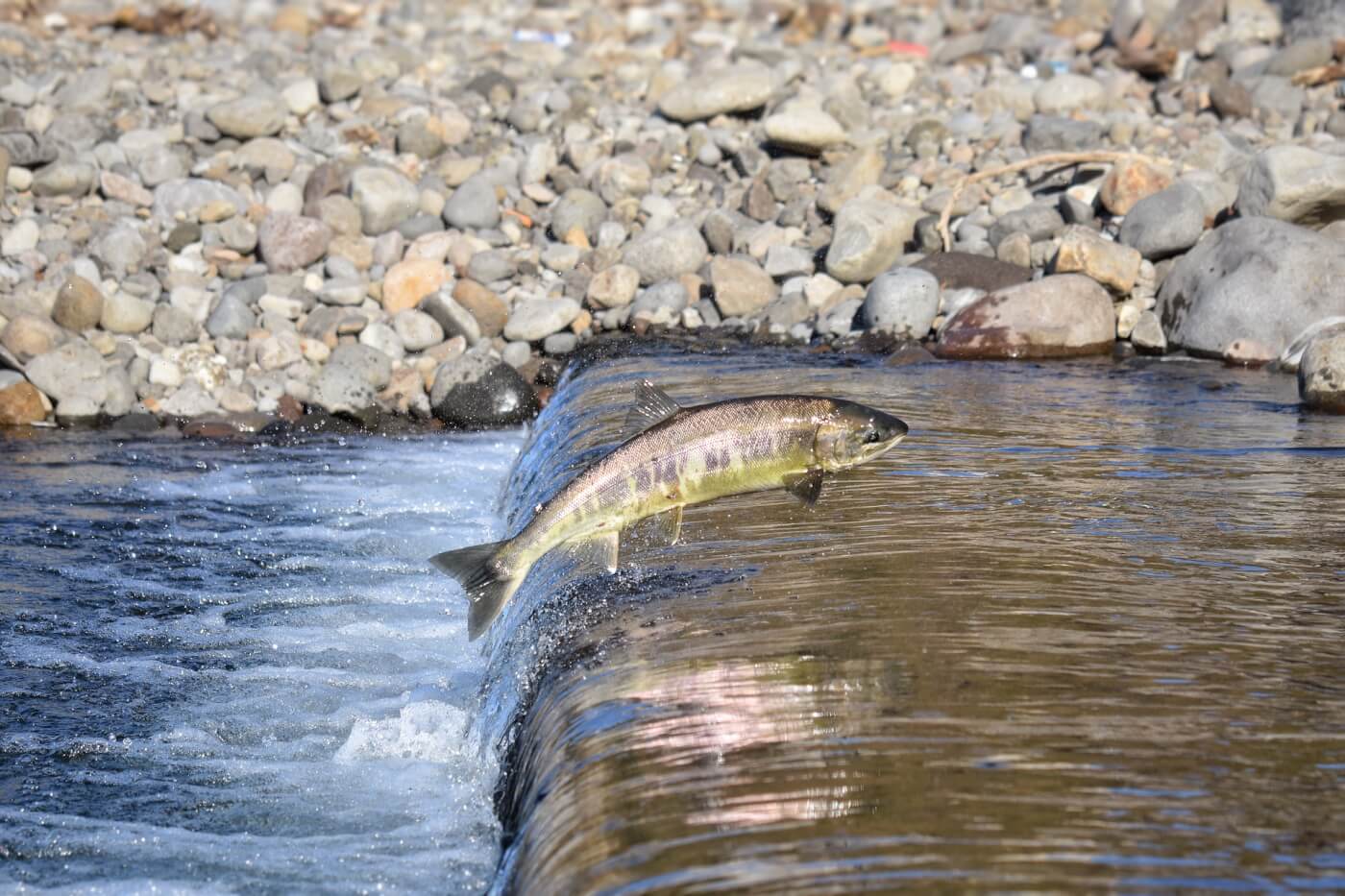 Oxford University scientist Dr. Theresa Burt de Perera discovered that fish learn even faster than dogs. They gather information by eavesdropping, and they also like to play, investigate new things, and hang out with friends.

Skip the Salmon Dye and Parasites and Opt for Vegan Seafood

Craving the Flavor of Salmon? Check Out These Delicious Vegan Salmon Recipes!