Move Aside Mercury, PCBs Are the Real Toxins in Fish 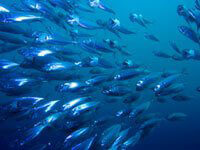 Fish can concentrate extremely high levels of chemical residues in their flesh and fat, as much as 9 million times that of the water in which they live.

PCBs, or polychlorinated biphenyls, are synthetic chemicals that were once used in hydraulic fluids and oils and electrical capacitors and transformers. These toxins were banned in the United States in 1979 for use in all but completely enclosed areas, but heavy past usage has resulted in environmental contamination worldwide, especially in fish. PCBs are dangerous because they act like hormones, wreaking havoc on the nervous system and contributing to a variety of illnesses, including cancer, infertility, and other sexual problems.

Researchers at the University of Illinois found that fish-eaters with high levels of PCBs in their blood have difficulty recalling information that they learned just 30 minutes earlier.

PCBs are absorbed into the bodies of fish. Bigger fish who eat smaller fish accumulate greater and greater concentrations of PCBs in their flesh and can reach levels that may be many thousands of times higher than the PCB levels in the water itself, which most people would never think of drinking. One bottle-nose dolphin had PCB levels of 2,000 parts per million (ppm)—40 times the amount required for hazardous waste disposal. Inuit natives, whose diets consist largely of fish, have been found with PCB levels of 15.7 ppm in their fat, far higher concentrations than the maximum amount considered to be safe in fish by the EPA (.094 ppm). Nearly all Inuit have PCB levels far above guideline levels that health officials consider safe, and some Inuit have ingested so much contamination from fish that their breast milk and body tissues would be classified as hazardous waste. In the United States in 2002, 38 states issued fish consumption advisories because of high PCB levels.

PCBs Will Make You Stupid

Fish-eaters in one study had high levels of lead, mercury, and DDE in their blood. Even low concentrations of lead can cause mental retardation and physical disability in children. Higher levels can lead to coma, convulsions, and death.

Dr. Susan L. Schantz of the University of Illinois College of Veterinary Medicine has been studying fish-eaters since 1992 and has found that people who ate 24 pounds or more of fish per year have problems with learning and memory. (On average, people around the world consume 40 pounds of fish per year.) She found that fish-eaters often have high levels of PCBs in their blood and thus have difficulty recalling information they learned just 30 minutes earlier. Says Schantz: “It had been assumed that mature adults are less susceptible [to PCBs] than are developing fetuses. This may not be the case.” Some fish-eaters in her study had high levels of lead, mercury, and DDE (formed when DDT breaks down) in their blood.30 Even low concentrations of lead can cause mental retardation and physical disability in children. Higher levels can lead to learning disabilities, behavioral problems, seizures, and even death.

Because salmon are becoming so rare in the wild, 80 percent of the salmon consumed in America today come from massive fish farms. These farmed fish are actually fed the flesh of wild-caught fish. It takes 5 pounds of commercially caught fish (all species that would not be saleable to humans) to create 1 pound of farmed fish. All that commercially netted fish comes with heavy doses of toxins, as discussed above, which then concentrate in the flesh of farmed fish, making it the most toxic thing that humans routinely put into their bodies. Farmed salmon also have twice the fat of wild salmon, and this fat collects even more toxins. Tests on farmed salmon purchased at U.S. grocery stores show that these fish are contaminated with even more PCBs than their wild counterparts.

Plus, farmed salmon are dyed pink to impersonate their wild cousins. In 2003, a class-action lawsuit was filed in the state of Washington because the labeling on farmed salmon neglected to mention the artificial coloring. Scientists are concerned because the dyes used in salmon can cause retinal damage.

Finally, in August 2004, scientists from Indiana University warned that industrial-strength fire retardant is showing up in salmon flesh worldwide.

The health consequences of exposure to all the toxins found in salmon can be grave—the Environmental Working Group estimates that 800,000 people in the U.S. face an excess lifetime cancer risk from eating farmed salmon.