One thing that every vegan hears on a fairly regular basis is “I could never give up bacon. It’s too good.” OK. Granted. Hunks of salted fried fat send our endorphins to Disney World. I grew up in rural Kentucky with two southern grannies who cooked. I get it.

What I don’t get is that when I ask bacon fanatics if they’ve ever tried meaty, salty veggie bacon, I get a wrinkled-up nose and “Ewww.” If you’re in loooove with something, don’t you want to try all varieties of it? And if the thing that you’re in loooove with happens to be making your arteries look like Chewbacca’s shower drain, wouldn’t you at least want to find out if you like the version that’s less … fatal?

Our lives are full of modern conveniences designed to give us all the satisfaction of the original versions with life-enhancing improvements. Just check out wood-look ceramic tiles, self-tanners, and about a million “hacks” on Pinterest. And veggie bacon. 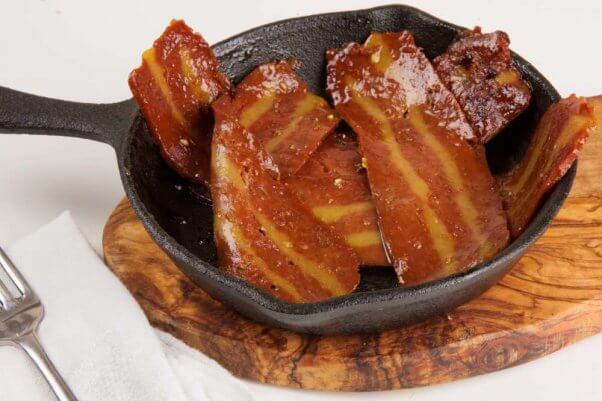 One strip has about 20 calories, 1 gram of fat, no saturated fat, and no cholesterol. Compare that to pig-tummy bacon: 46 calories, 3.6 grams of fat, 1.2 grams of saturated fat, and 9 milligrams of cholesterol, according to CalorieKing.com. (The sodium and protein in both are comparable.) Multiply those differences by the number of strips that a typical meat-eater consumes in a year, and … wow.

And there are other pluses: Since veggie bacon is made from lean plant protein instead of severed strips of pig stomach, it doesn’t have those slimy, white mushy parts—and I’m sorry, but raw pig stomach just looks nasty. It does. 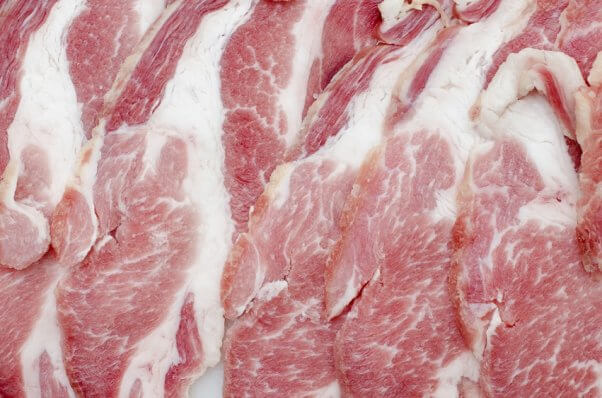 Then there’s the environment. By some estimates, animal agriculture is responsible for more greenhouse gases than all of the world’s transportation systems combined. Since 1970, 90 percent of the land cleared in the Amazon rainforest was used for livestock. We’re literally bulldozing the rainforest in order to eat meat.

Also, pigs are really cool. People with companion pigs often compare them to dogs, because they’re playful, they dream, they enjoy learning “tricks” to get treats, and they have distinct personalities. Like teenagers, they can play video games and enjoy listening to music, and unlike teenagers, they’re affectionate and want to be close to their family members. PETA friend James Cromwell stopped eating pigs after spending time with them on the set of Babe.

In slaughterhouses, these amazing animals’ throats are slit, and many are still alive and crying out when they reach the scalding tank meant to remove their hair. Let’s be honest: That’s bullshit.

The day I discovered veggie bacon was kind of like when I first heard The Beatles. (And Paul McCartney is vegetarian, by the way.) I’ve turned a lot of skeptics (including my bf, who “hates vegetables”) into believers with veggie bacon baked at 350 degrees for about 10 minutes. It gets really nice and crispy, and damn, that stuff is good. There are lots of kinds to try, like Atlas Monroe’s Vegan Cured Bacon.

The way I look at it, if I can eat something that tastes the same and is just as satisfying but is way healthier for me, is much kinder to the environment, and doesn’t make really cool animals suffer, why wouldn’t I do that?

So, bacon devotees, my request for you is this: Don’t crinkle your nose at me (BTW, Colbie Caillat is also vegetarian), and give veggie bacon a chance. There are lots of kinds to try. And if you’ve ever had Bac-Os or McCormick Bac’n Pieces, you’ve already had vegan bacon. Yep. And you probably liked it, too.