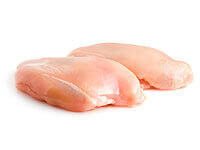 UPDATE: Although the March 4, 2014, deadline for the prize has now expired, PETA’s in vitro chicken contest was a smashing success! Since we announced the prize, laboratory work on in vitro meat has come a long way, and a commercially viable beef hamburger or pork sausage are bound to happen in the not-too-distant future (Dr. Mark Post has already had a taste-testing in London of the prototype). More good news is that the science used in the development of in vitro pork and beef will eventually be used to create in vitro chicken, sparing chickens—the most abused individuals used for food by virtue of their sheer number, with a million slaughtered in the U.S. alone each hour—mass suffering and death.

We’re eager to move on to yet more innovative ways to combat animal suffering in the meat industry, and as a result, we’re now entertaining ideas for how to put that $1 million prize (originally intended for the creator of in vitro chicken) to good use in combating cruelty in food production in other ways. We will continue this quest until all animals, even the ones some find “tasty,” are treated with the respect and dignity that they deserve.

Since 2008, when PETA first announced a $1 million prize for the first laboratory to use chicken cells to create commercially viable in vitro (test tube) meat, researchers—including teams at the University of Missouri and the Netherlands’ University of Maastricht—have made enormous headway in the test-tube meat competition, with a test-tube hamburger taste test on the horizon. However, PETA’s primary interest is in replacing chicken factories, transport, and slaughter because more than 1 million chickens are eaten every hour in the U.S. alone. As an in vitro chicken nugget is still a ways away, PETA has decided to extend this contest until March 4, 2014, the 85th anniversary of Herbert Hoover’s inauguration. You will recall that it was President Hoover’s party that promised a “chicken in every pot.” Well, make that in vitro chicken, and we’ve got a deal. See below for complete contest details.

Scientists around the world are researching or seeking the funds to research ways to produce meat in the laboratory—without killing any animals. In vitro meat production would use animal stem cells that would be placed in a medium to grow and reproduce. The result would be real flesh, of course, and could be used in the same ways that chicken meat is used. Some major breakthroughs have been made toward mastering this technology.

PETA is offering a $1 million reward to the first scientist to produce and bring to market in vitro chicken meat.

Why is PETA supporting this new technology? Despite the fact that chickens can outperform human children in some cognitive tests, can count to five without being taught, and exercise self control, they are arguably the most abused animal on the planet. More chickens are raised and killed for food than all other land animals combined, yet not a single federal law protects them from abuse. In the United States alone, more than 7 billion chickens are killed for their flesh each year. Ninety-nine percent of these animals spend their lives in total confinement—from the moment they hatch until the day they are slaughtered.

Of course, humans don’t need to eat meat at all—vegetarians and vegans are far less likely to get heart disease, diabetes, high blood pressure, or cancer or become obese than are meat-eaters—and a terrific array of vegetarian mock meats already exists. But because many people refuse to kick their meat addiction, PETA wants to help them switch to flesh that doesn’t cause suffering and death.

PETA is offering a $1 million prize to the first contest participant able to make in vitro commercially viable chicken meat by March 4, 2014. The contestant must do both of the following:

The judging of the taste and texture will be performed by a panel of PETA-approved judges, who will sample the in vitro chicken prepared using PETA’s own fried “chicken” recipe. The in vitro chicken must attain a score of at least 80 out of 100 when evaluated in order to win the prize.

In the meantime, order your free vegetarian/vegan starter kit to get started on a healthy and humane path today!