Turned Away: A Closer Look at ‘No-Kill’ Animal Shelters

Right before dawn one morning, a man drove up to a “no-kill” animal shelter in Virginia. He didn’t know anyone was watching, but he apparently did know that the limited-admission shelter often refused entry to animals in need. The man was seen throwing a mixed-breed dog—frightened and malnourished, with every rib visible—from his vehicle before speeding off into the dark. Terrified and desperate, the dog ran onto a nearby highway. It wasn’t long before she was struck by a car. A shelter worker found the dog struggling to stand, apparently having sustained a broken back and a crushed pelvis. The young dog was finally euthanized because of the extent of her pain and injuries.

If the shelter had had an open-door policy—or even if it had simply transported her to a local socially conscious open-admission shelter—this dog would have been spared terror, pain, suffering, and perhaps even death.

A first-of-its-kind video reveals how, every day, animals like this abandoned dog are turned away by shelters boasting of “no-kill” policies. Keeping animals out of shelters may keep “no-kill” shelters’ euthanasia rates low and make for effective fundraising, but it spells disaster for animals. See why “no-kill” can mean no help for the neediest cats and dogs:

Because more than 6 million dogs and cats flood animal shelters every year, “no-kill” facilities are perpetually full, with weeks- or months-long waiting lists, “managed admissions,” and appointment-based systems. Under intense pressure from “no-kill” extremists to increase “live-release” rates and reduce euthanasia at all costs, many shelters are turning their backs on the very animals who need them most.

“The limited intake philosophy is not the solution for the problem because you’re not addressing all the animals in need. When you’re full, you’re full. What happened to those 608 cats [our shelter turned away] last year?”

“No-kill” policies don’t prevent animals from dying. They simply leave them to die elsewhere—often miserably. Facilities that adhere to these policies opt not to involve themselves in euthanasia by turning away animals in need, shipping animals out of state to unknown and often untraceable destinations, or warehousing animals in cages indefinitely.

Ironically, many “no-kill” shelters refer unwanted animals to high-intake, open-admission shelters—which take in all animals and must therefore euthanize some to make room for the steady stream of newcomers. Yet in their fundraising materials and public statements, many “no-kill” advocates and facilities condemn shelters whose workers must carry out the heartbreaking, inescapable work that “no-kill” shelters refuse to do. This siphons public support away from the facilities that help the vast majority of unwanted animals in need.

“No-kill” groups also avoid accountability by shuttling animals between “foster homes,” sometimes for years. This deprives dogs and cats of the stability and bond of a permanent home and leaves them psychologically and behaviorally scarred from constant confinement and repeated abandonment.

Desperate and With Nowhere to Turn

They’re dumped on city streets or on desolate country roads, where they get injured or killed in traffic, starve, or succumb to the elements, as well as reproducing—creating even more homeless animals. Others end up spending their lives on a chain or confined to a lonely kennel in an isolated backyard. Some are violently killed or fatally neglected.

“It was either that [take the dogs to an animal shelter] or shoot them.”

After a publicly funded shelter in Florida turned away a 6-week-old kitten, a woman left him in the parking lot. He was found hours later with severe injuries, including a crushed skull, after being run over. The kitten was denied euthanasia and died days later, in a cage.

When an animal hoarder in New York asked a “no-kill” shelter to take some of her cats, she was put on a waiting list. About a year and a half later, authorities raided the hoarder’s home and found 67 dead cats and kittens in a freezer along with 99 live cats who were suffering from flea infestations, untreated wounds, dehydration, and upper respiratory illnesses.

Refusing to accept animals may make shelters’ euthanasia rates and statistics sound favorable to donors, but what happens to the unwanted animals once the shelters turn them away?

Conversely, some “no-kill” facilities never turn anyone away and instead hoard animals, as PETA’s undercover investigations have revealed. At Florida’s Caboodle Ranch, a self-proclaimed “cat rescue sanctuary,” 700 cats lived outdoors amid vomit, trash, excrement, roaches, and maggots and in dilapidated, moldy trailers and wooden sheds that reeked of ammonia. Sick cats gasped for air and struggled to breathe. One cat languished for months with a perforated cornea until she finally died.

Angel’s Gate, a so-called animal “hospice” in New York, left animals in urine-soaked diapers that scalded their skin and forced paralyzed dogs to drag their legs behind them until they were covered with raw, bleeding sores. Corpses of animals who had died were left among living animals for days. Investigations into Sacred Vision Animal Sanctuary in South Carolina and All Creatures Great and Small in North Carolina revealed similar horrors. These are not isolated occurrences: An estimated 25% of 6,000 or so new hoarding cases in the U.S. each year are made up of animal “rescues” and “shelters.”

The only real, sustainable, and humane way for communities to end the euthanasia of healthy animals at shelters is by cutting off the supply of homeless animals.

PETA contacted each of the shelters that turned away animals in the video above and urged them to implement a five-point plan that addresses the reasons why animals end up homeless in the first place. The plan includes carefully screening prospective adopters and placement partners to avoid adoptions or transfers into bad homes (including hoarding situations), spaying or neutering all animals before their release, offering free and low-cost spay/neuter services or assistance, lobbying to ban pet store sales of dogs and cats, and accepting every animal without fees, appointments, or waiting lists.

Additionally, PETA has repeatedly called on the National Governors Association to attack the roots of animal homelessness by promoting mandatory spay/neuter legislation across the country.

PETA has been combating animal homelessness hands-on in our own community—where our Norfolk, Virginia, headquarters is located—by sterilizing more than 189,000 cats and dogs in our mobile clinics since 2001 and helping thousands of people keep their animals by offering no- to low-cost veterinary services, counseling, and other resources. Our ads and public service announcements have encouraged millions of people to have their animals sterilized and to adopt animals from shelters.

We can turn our communities into places where no cats or dogs struggle to survive on the streets, must wait for homes in overburdened shelters, or have to be euthanized for lack of a home. Each of us can help by always having our animal companions spayed or neutered, adopting from shelters instead of buying from breeders or pet stores, and encouraging our friends and family to do the same. Together, we can become no-kill the right way—by becoming no-birth. 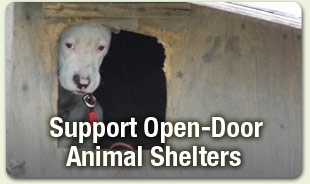 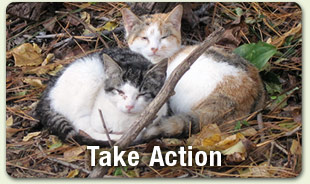