You’d expect to see a celebrity in a ball gown floating down a red carpet, but this one is floating in a pool to bring attention to the animals imprisoned at SeaWorld. In her debut PETA campaign, shot by photographer Mallory Morrison, Rainey Qualley wants you to imagine being confined for a lifetime. 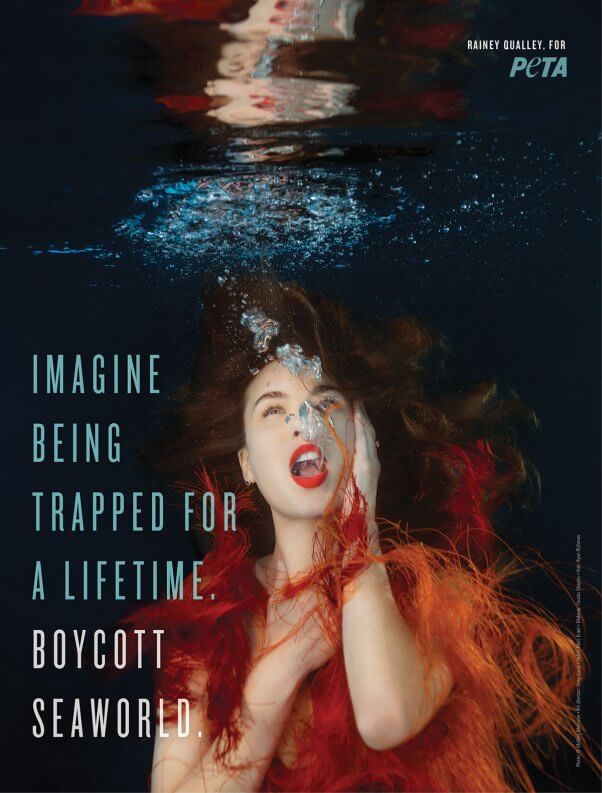 Rainey, much like her mother, Andie MacDowell, is a true animal advocate. She urges people to #AdoptDontShop, regularly fosters kittens, loves animal-free fashion, and wants to empty the tanks at SeaWorld.

In her behind-the-scenes video with PETA, Rainey shares how devastating it is that animals at SeaWorld’s parks are imprisoned in tiny tanks and forced to perform.

“If you love animals, don’t go to SeaWorld.”

Orcas are a highly intelligent and social species, and they often stay with their families for life. They work together to search for food, and in some populations, they rarely leave their mother’s pod. They can travel up to 140 miles in the ocean in a single day.

The tiny tanks they’re confined to at SeaWorld leave them with nothing to do but float listlessly or swim in endless circles while enduring stress and frustration. In the ocean, aggression between orcas within a family pod is almost nonexistent, but at SeaWorld they’re often stuck in incompatible groups.

These tanks don’t leave any room to escape conflicts with other frustrated or aggressive animals, resulting in attacks, injuries, and even deaths. In August 2022, an attack occurred among orcas at SeaWorld San Diego, which resulted in a serious wound to one. In an eyewitness video, the injured orca can be seen trying to escape the attacks by beaching themselves—which is a highly unnatural behavior. The park has a history of similar attacks, including when an orca named Nakai sustained puncture marks and lost a chunk of his jaw in an attack reportedly by two other orcas with whom he was sharing a tank.

If you want to help orcas and other animals confined to tanks, you can start by joining Rainey and never visiting SeaWorld or any other abusement park. Urge SeaWorld to end its use of animals and retire them to seaside sanctuaries:

Tell SeaWorld to Empty Its Tanks!