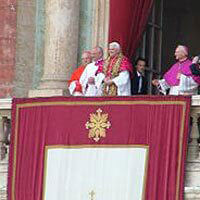 Just hours after Cardinal Joseph Ratzinger was named Pope Benedict XVI in April 2005, PETA offered congratulations and urged His Holiness to include animals in the Catholic Church’s areas of concern.

Pope Benedict XVI has spoken movingly about the exploitation of all beings, particularly of farmed animals. When asked about the rights of animals in a 2002 interview, he said, “That is a very serious question. At any rate, we can see that they are given into our care, that we cannot just do whatever we want with them. Animals, too, are God’s creatures . . . . Certainly, a sort of industrial use of creatures, so that geese are fed in such a way as to produce as large a liver as possible, or hens live so packed together that they become just caricatures of birds, this degrading of living creatures to a commodity seems to me in fact to contradict the relationship of mutuality that comes across in the Bible.”

Cardinal Ratzinger was echoing official church teachings as laid out in the Catechism of the Catholic Church, which clearly states, “Animals are God’s creatures. He surrounds them with his providential care. By their mere existence they bless him and give him glory. Thus men owe them kindness. We should recall the gentleness with which saints like St. Francis of Assisi or St. Philip Neri treated animals. . . . It is contrary to human dignity to cause animals to suffer or die needlessly.”

Compassion for animals was also a prominent theme in the late John Paul II’s papacy. Pope John Paul II proclaimed that “the animals possess a soul and men must love and feel solidarity with our smaller brethren.” He went on to say that all animals are “fruit of the creative action of the Holy Spirit and merit respect” and that they are “as near to God as men are.”

Pope John Paul II reminded people that all living beings, including animals, came into being because of the “breath” of God. Animals possess the divine spark of life—the living quality that is the soul—and they are not inferior beings, as factory farmers, fur farmers, and others who exploit animals for profit would have us believe. After he became Pope John Paul II, His Holiness went to Assisi, the birthplace of St. Francis, and spoke of the saint’s love for animals. He declared, “We, too, are called to a similar attitude.

Catholics can honor the teachings of Pope John Paul II and the sentiments of Pope Benedict XVI by incorporating compassion for animals more fully into their own lives.