Mega-celebrity and devoted animal advocate Kate del Castillo, also recognized as one of the most influential and beautiful women by People en Español magazine, joins forces with PETA once more. Known for being brave and outspoken, Kate—who comes from acting royalty in Mexico—isn’t one to shy away from fighting for what she believes in, and this time, she’s taking on the animal-abusing fur industry to expose the suffering and death of animals. The actor braved frigid weather in NYC today to unveil her breathtaking ad. The tagline of the stunning image—in which she poses in an icy snowscape wearing nothing but frost on her bare skin—reads, “I’d Rather Go Naked Than Wear Fur.” 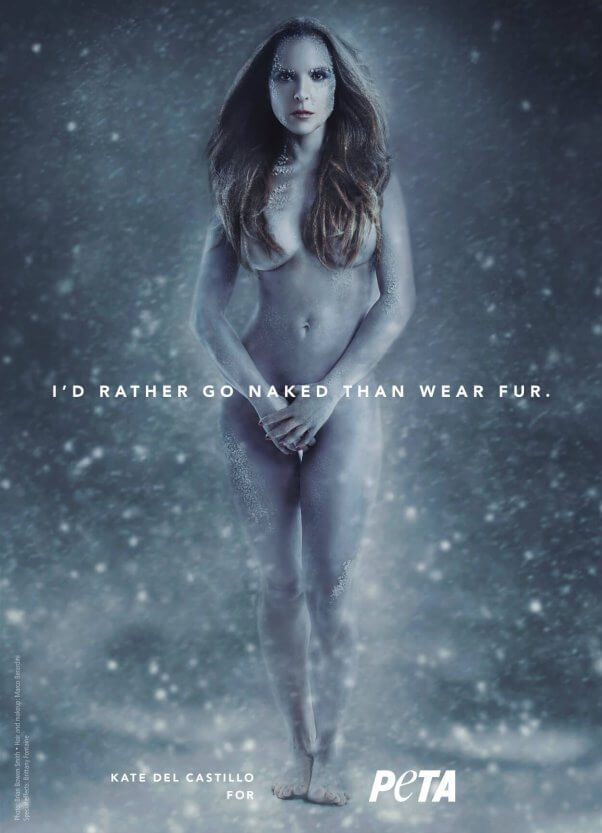 In our exclusive behind-the-scenes video, the international star explains that being beautiful has nothing to do with clothing and that beauty comes from within. She says, “I think when you see yourself in the mirror and there’s no regrets … that makes you a beautiful person ….”

It’s unfair that foxes, minks, rabbits, dogs, and cats are bludgeoned, stomped, electrocuted, or gassed to death—or even skinned while still alive—so that humans can steal what rightfully belongs to these animals. As Kate says, “You don’t need to wear fur to be beautiful.” All animals, whether human or not, should be able to wear their own skins. You can help make this happen.

Pledge to be Fur Free