Grocery store aisles lead shoppers down a path of reminiscence, taking them back to the picturesque illustrations adorning children’s books and tales of farmers caring for happy animals. The meat and dairy industries have taken pages out of these books, wrapping their products in propagandized depictions of cows grazing in open fields, chickens pecking in the grass with no cages in sight, and “humanely” raised pigs. But what’s really beneath the shiny packaging and reassuring labels? What happens when you compare expectations to reality? Take a look at the way cheese, eggs, and “humane” meat are really obtained. 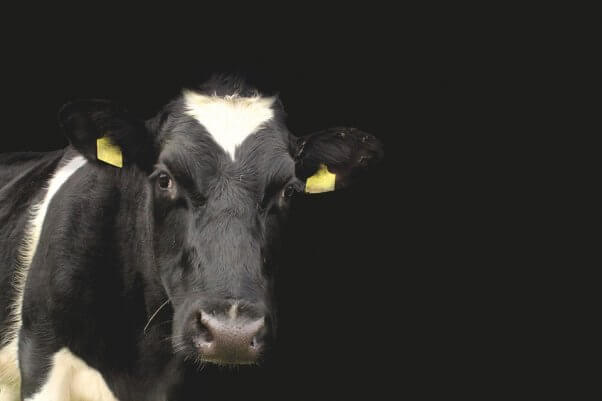 Cows are gentle, affectionate animals who form loving relationships with their friends and family members. They can see more than 300 degrees at a time and perhaps use this ability to aid in their often silent conversations. Similar to how you might communicate concern with a furrowed brow or contentment with a slight smile, cows exchange messages through a variety of subtle facial movements. 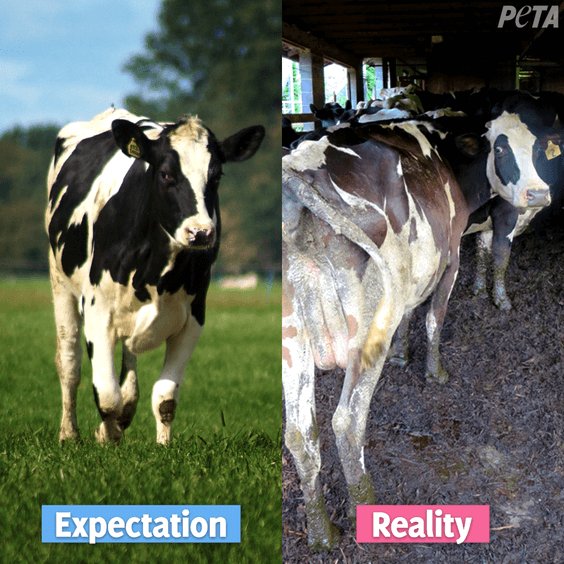 Far from rolling hills and lush green meadows, cows exploited by the dairy industry are confined to crowded, filthy barns and forced to wallow in their own feces. Treated like milk machines, they’re genetically manipulated and often pumped full of antibiotics and hormones to manipulate their reproductive systems into producing over 22,000 pounds of milk each year, some of which gets turned into cheese. In order to cut costs, they’re fed diets consisting of unnatural ingredients such as chicken feathers and fish.

There is no way to produce cheese without exploiting the female reproductive system. Cows make milk for their babies. Cows love their babies just as much as human mothers love theirs, and they bellow out their distress when their newborns are stolen from them so that farmers can take their milk. Female calves are condemned to the same fate as their mothers. Males are confined to cramped stalls, fed a diet designed to give them anemia, and killed for veal at only 16 to 18 weeks old. The veal industry is directly subsidized by dairy sales and provides a secret ingredient necessary for the production of certain types of cheese: the stomach lining of calves, also known as rennet.

Whether used for their milk or raised just for their flesh, all cows are killed behind the same slaughterhouse walls, if they make it through the terror at the farm. Cows have a natural life expectancy of 20 years, but they suffer from disease, lameness, and reproductive problems that render them worthless to the dairy industry before they reach the age of 4 or 5, at which time the spent, young mothers are sent to be slaughtered.

How to Help Cows

Cut out the middle cow and go straight to the source of calcium: plant foods. Green leafy vegetables and vegan milks and cheeses provide calcium, vitamins, iron, zinc, and protein, without the cholesterol, heart disease, diabetes, or other adverse health effects of dairy. Check out our favorite vegan cheeses and where to find them. 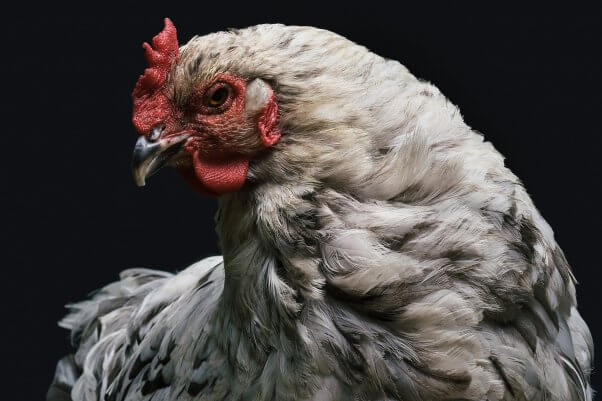 Chickens are intelligent, social birds who form deep community ties and family bonds. A hen will cluck soothingly as she sits on her eggs, teaching her chicks to recognize her voice. Chicks will respond in kind, chirping back to their mother and even their siblings from inside their shells. 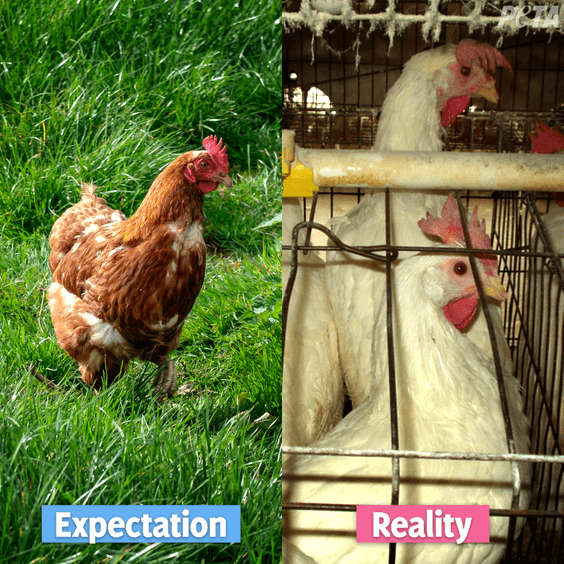 Cartons of eggs may be labeled “cage free,” but they certainly aren’t cruelty-free. Labels such as “cage free” and “free range” aren’t regulated by the federal government and don’t have to meet any additional requirements for standards of care. These labels bring no comfort to the chicken feeling the warmth of the sun for the first time as she’s forcibly stuffed into a severely crowded truck and sent to slaughter.

While “free-range” chickens might not be confined to the severely cramped wire battery cages in which the vast majority of chickens used for eggs spend their lives—crammed up against up to 5 other hens in a cage half their wingspan in width and little more than half their wingspan in length—they are far from free. PETA’s investigation of one “free-range” egg farm revealed that the chickens spent most of their lives confined to crowded sheds. They were crammed so tightly together that they were unable even to spread their wings without hitting the birds next to them. In such intensive confinement, these birds are unable to form close social bonds or establish pecking orders. Each member of a pecking order understands her own rank and recognizes the ranks and faces of more than 100 other chickens. The lack of social order and deplorable living conditions drive the chickens to peck themselves or each other in frustration. To prevent this, when the birds are just a day old, the hatchery removes the extremely sensitive tip of their beaks with a hot blade or burns it off with a laser without any pain relief.

Male chicks born at hatcheries are considered useless—and they’re asphyxiated with carbon dioxide, thrown while still alive into a grinder in a process called maceration, or simply left to suffocate by the thousands in garbage bags or dumpsters.

In order to increase profits, the industry has bred chickens to lay more than 300 eggs a year. When their nutrient-depleted bodies and calcium-leached bones are unable to withstand the stress on their reproductive system, they’re slaughtered. Whether from a “cage-free,” a “free-range,” or an “organic” farm, all chickens are sent to the same atrocious slaughterhouses. There, many of them will be drowned in the scalding-hot water of the defeathering tanks or stabbed in the throat while they’re still conscious.

How to Help Chickens

The only way to stop this suffering is to stop eating eggs. Fortunately, there are a number of delicious, satisfying, and healthful vegan options that you can use in place of eggs. These vegan upgrades will cut the cruelty and the cholesterol out of your baking and scrambles. Check out some of our favorite tips and tricks for replacing eggs. 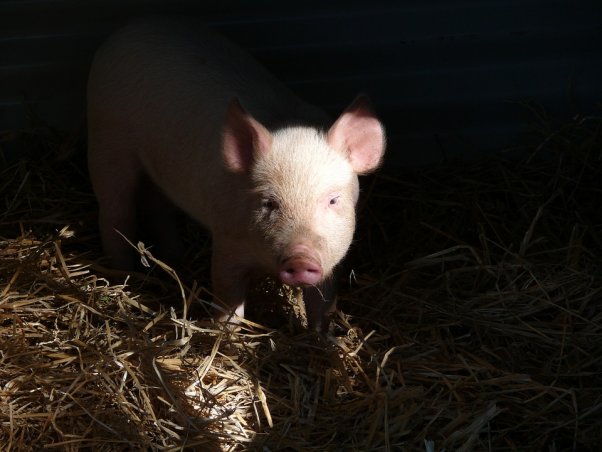 Pigs are friendly, loyal, and intelligent. These social animals use oinks, grunts, and squeals to express a wide range of emotions and woo mates. If your “bacon” would have enjoyed listening to music, getting a massage, and even playing video games, the question is not what but who you are eating. 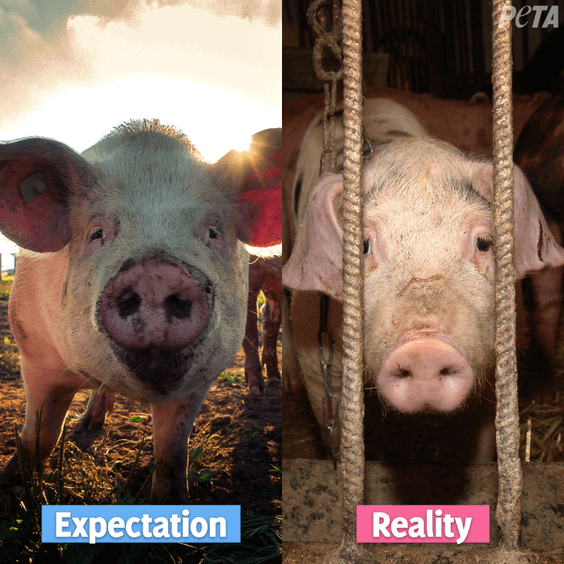 In response to the growing awareness of the cruelty inherent in animal slaughter, the meat industry has changed its labels rather than its practices. Labels such as “humanely raised” or “family farmed” do more to alleviate consumer guilt than animal suffering. However deceitful the packaging, there is no humane way to kill someone in order to please your taste buds.

Pigs, who are naturally very clean, are confined to crowded, filthy sheds and forced to stand on slatted concrete floors encrusted with feces. They are denied the opportunity to express natural types of behavior, such as digging, and are provided no enrichment. Their entire lives are reduced to standing in excrement, trapped between other agitated pigs, until they’re slaughtered when they’re just 6 months old—far short of their natural life expectancy. These conditions trigger stress-induced types of behavior such as biting themselves and each other. To prevent this, the ends of their teeth are snipped off with pliers—one of many mutilations pigs are subjected to. Their tails are chopped off, their ears are cut, and males are castrated, all without any pain relief to ease their suffering.

Female pigs are forcibly impregnated and confined to gestation or farrowing crates so small that they can’t even turn around. Just a few weeks after giving birth, the new mothers cry out in distress as their piglets are torn away from them. This cycle is repeated again and again until their bodies give out and they are sent to slaughter.

At the slaughterhouse, pigs are hung upside down by their legs and their throats are slashed—while they’re still conscious and fighting for their lives. Because of improper stunning methods and the sheer number of animals killed, some pigs remain conscious even as they’re plunged into the tanks of scalding-hot water intended to remove their hair and soften their skin.

How to Help Pigs

Vegan meat is the only kind that’s actually humane. Most supermarkets and many restaurants now offer Beyond Meat, and there are a plethora of other vegan meat options—from bacon to hot dogs—to choose from these days! These products will satisfy your taste buds without the cruelty, cholesterol, or fecal bacteria permeating animal flesh. Check out our favorite vegan meat brands, and order a free vegan starter kit to start saving lives.

This piece was written by PETA intern Victoria Sova.