Touring haunted horror houses is a classic activity during the spooky season, but other animals endure real horror houses—slaughterhouses, roadside zoos, laboratories, and more—for their entire lives. This season, put yourself in animals’ shoes by learning about these horror houses in which animals suffer and what you can do to stop them.

The bloodiest, goriest slasher films couldn’t hold a candle to the largest pork producer in the world: Smithfield Foods. A former Smithfield slaughterhouse worker wrote to PETA, describing the grisly scene and saying that he could hear pigs scream while trying to escape from workers who shoved them into cramped mobile cells, shocked them with stun guns, hooked them by their ankles, and cut their necks, leaving puddles of blood and guts on the floor. The facility, he said in the report, reeked of death: “The smell haunts me, and I still have nightmares.” Conditions are so horrifying that PETA asked the company to offer public tours for Halloween in order to show people what a real horror house looks like.

If the thought of your scariest nightmares haunting your every waking moment makes your skin crawl, you won’t be able to stomach the horror scene that is the hellish monkey laboratory of National Institutes of Health experimenter Elisabeth Murray. Monkeys, with thoughts and emotions of their own, undergo a procedure in which experimenters cut open their heads, inject toxins into their brains, and expose them to fake snakes or spiders, intentionally to elicit terror. When Murray is through with them, they may be killed or tormented again in other experiments.

Tanks of Terror at SeaWorld

In SeaWorld’s Tanks of Terror, orcas are going mad while swimming in endless circles in small concrete tanks, and dolphins and whales are sexually abused and forcibly impregnated—sometimes after being drugged—to create generations of suffering animals. Forty orcas, more than 300 other dolphins and whales, approximately 400 pinnipeds, and countless other animals have died on SeaWorld’s watch, many of whom had much shorter lives than they would have had in the ocean. With all but one of the captive orcas in the country, SeaWorld’s parks are a living hell for marine life. 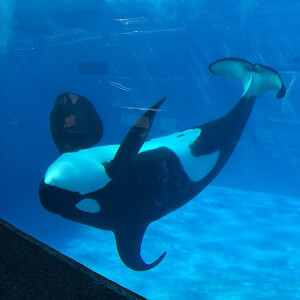 Cows are abused in slaughterhouses everywhere. In JBS’ slaughterhouse in Nebraska, cows reportedly endured hours of waiting in dingy, crowded trucks. Some don’t even make it to the slaughterhouse, dying from heatstroke or freezing to death. On multiple occasions, JBS workers have botched killings. One report reveals that workers left a cow slowly bleeding out for 13 minutes before shooting her again.

At Waccatee Zoo, imprisoned animals attack themselves, spin around in circles, and lose their hair in patches while the roadside hell keeps them in cramped, unkempt, and solitary confinement. Lil Trix, a baboon in the roadside zoo, sways back and forth for hours on end. A capuchin named Jake has been seen shaking and drooling, and another baboon, named Handsome, spends his time rolling his head back and forth. Conditions are so poor at this facility that PETA named it the worst roadside zoo in America.

Send a Letter to Waccatee Zoo to Help the Suffering Animals

PETA says Frank Perdue, the former CEO of Perdue Farms, is responsible for more deaths than nearly anyone in history. His infamous cruelty continues at Perdue slaughterhouses, where chickens are shackled upside down, electrocuted, slashed through the neck with a whirling blade, and then lowered headfirst into scalding-hot water. One undercover investigator said that the chickens’ screams were so loud that you had to yell just to speak to someone standing next to you.

No matter where alpaca fleece is obtained, it’s the product of the exploitation of animals. A disturbing undercover PETA investigation revealed that workers on the world’s largest privately owned alpaca farm—which supplies alpaca fleece to Urban Outfitters, Inc., brands Anthropologie and Free People—hit, kicked, tied down, and mutilated alpacas. Pregnant animals were slammed onto tables, causing many to cry out and vomit in fear. Workers stretched out the animals using devices that looked like medieval torture racks, and many were left bleeding from deep, painful wounds caused by careless shearing.

When Halloween ends, many of us will leave the horror houses behind, but animals will continue living and dying in this nightmare unless YOU HELP STOP IT!