With everyone self-isolated at home and finding themselves on social media more than ever, by now, you’ve probably heard about Nintendo’s new game, Animal Crossing: New Horizons. This vegan guide to it will help answer some of the tough ethical questions that it presents as well as give you an opportunity to help real animals while living your island life.

Is fishing in Animal Crossing vegan?

This is a biggie. Fishing isn’t vegan! You shouldn’t fish in real life, so you shouldn’t do so in the game, either.

Sure, unlike in real life, the fish in the game don’t feel pain, but fishing is harmful to animals and the planet. This is your island, and it’s your job to protect it. Tearing the wildlife right out of their ocean homes so that you can “donate” them to Blathers for museum exhibits is not only cruel but also bad for the environment.

In the real world every year, anglers leave behind a trail of tackle victims that includes millions of birds, turtles, dolphins, and other animals who sustain debilitating injuries after they swallow fishhooks or become entangled in fishing lines. Wildlife rehabilitators say that discarded fishing tackle is one of the greatest threats to aquatic animals. Don’t let this happen on your island!

It’s disappointing that a game in which villagers from all different species (from elephants and ducks to deer and pigs) coexist harmoniously with humans encourages abusive behavior toward fish and insects. Instead of being recognized as the living, breathing, feeling individuals they are, they’re presented as forms of entertainment for the other villagers. Your island should be a safe space for all animals, big and small.

Is it OK to catch bugs in Animal Crossing?

From butterflies to wharf roaches, your island is a bustling home for various insects and other little animals. Keep it that way!

Blathers would like to build a museum of fish and insects on your island. Don’t let him do it!

Just as fish don’t belong in tanks, insects don’t belong inside cramped cases in a museum for other villagers to gawk at. Your island should be a place where wild animals are free to live without being captured and exploited. In the real world, animals suffer in captivity at places like SeaWorld and roadside zoos. They’re deprived of everything that’s natural and important to them. In Animal Crossing, you have the choice to let the animals on your island live free from harm, so please, leave them alone!

On your island, you can dig for clams. Here’s why you shouldn’t.

Clams are bivalves who may look less familiar to us than mammals, but they still deserve consideration and respect. They’re capable of a surprising range of behavior. Did you know, for instance, that they can escape from danger by burrowing through sand? Although it’s unclear whether they feel pain, in the real world they play an important role in the ecosystem. And if they do feel pain, they constitute a huge group of animals suffering for food every year. It’s best to be safe than sorry and not dig for clams on your island.

Should I leave the hermit crabs in the game alone?

Hermit crabs love hanging out on the shore of your island. Leave them there. When you capture a hermit crab in the game, the screen says, “I caught a hermit crab! I think it wanted to be left alone!” In this situation, the game demonstrates surprising awareness that we shouldn’t be bothering these animals and taking them from their homes.

In real life, hermit crabs can live for more than 30 years in their natural habitat on tropical seashores, but after being purchased in the pet trade, most don’t live for more than a few months to a year. Don’t take hermit crabs from your island’s beaches and sell them to Blathers or Timmy Nook. They’re not objects—they’re individuals!

What would a vegan eat on a desert island?

Now, the whole world knows the answer to the eternal question of what a vegan would eat on a desert island: fruit! In the game, it makes you strong.

When you eat enough fruit, you actually become strong enough to shatter rocks and receive extra bells and resources from them.

What other vegan food can you eat in the game?

Islands have different starting fruits, including the following:

Visit friends or mystery islands to collect every type of fruit for a colorful menu of vegan snacks.

What can vegans wear in the game?

Being vegan means not only not eating animals but also not wearing them. Avoiding products made with fur, leather, wool, down, or cashmere and opting instead for clothing made with vegan materials like cotton, microfiber, hemp, nylon, and polyester prevents animals from being slaughtered for fashion. In addition, wearing vegan is much better for the environment.

In Animal Crossing: New Horizons, you can buy fun animal-friendly items like pleather shorts and pleather sneakers. Even in the fictional world of this game, sentencing animals to a lifetime of suffering before killing and skinning them, just to wear their skin, fur, or feathers, is so not cool!

Should I build a doghouse?

If you get instructions to build a doghouse, don’t! Life at the end of a heavy, short chain is all too real an issue for many dogs in the U.S.

Right now, countless dogs are constrained outdoors in all weather conditions with chains just like the one pictured here, languishing alone and struggling to survive long days and nights without proper shelter from the elements. Often, these lonely dogs are deprived of even the basics—such as food, water, and veterinary care. They’re forced to spend their lives in solitary confinement, relegated to the backyard without any companionship, play, or exercise. Dogs are individuals who belong in homes—not on a chain. Please, don’t mistreat them on your island.

Is Tom Nook Exploiting you?

Tom Nook is a tanuki, or a raccoon dog, who are often killed for their fur. Others like him in the real world are beaten, anally electrocuted, gassed, or skinned alive. Cut him some slack.

One of the many unique villagers you’ll meet in Animal Crossing: New Horizons is Harvey the dog. He’s a total hippie, he loves nature, and he’s vegan! In previous games, he expressed his fondness for vegan burritos and his love for birds.

Spoiler alert: In Animal Crossing, the generous vegan dog will invite you over to his island and allow you to use his photo studio, Photopia, free of charge. There, you can make cool sets, try on different costumes, and even use models in one of Harvey’s five rooms for photo shoots.

Isabelle the dog is a familiar face to Animal Crossing fans. She works on the island and helps make life comfortable for all villagers. The game provides a clue that everyone’s favorite friend may be even kinder than many realize. She seems to love tofu—does this mean she’s vegan? We can’t confirm that, but it would make sense. In a world in which your neighbors consist of chickens, pigs, cows, and other animals, eating tofu, grains, and other vegan foods is the only ethical way to live.

How can you spread animal rights through Animal Crossing?

Customize your passport with a phrase like #EndSpeciesism or “Adopt, don’t shop” or “Go vegan!“

Post a bulletin to instruct your visitors to leave wildlife alone.

How can you enjoy your island in an animal-friendly way?

Instead of fishing or catching insects, engage in animal-friendly activities when your friends come to visit your island.

…playing music together under the stars…

…or discovering a secret beach together!

Sit back and enjoy island life while knowing that you’re causing no real or virtual harm to animals.

PETA hopes the game will encourage people to feel closer to the animals we share our planet with and inspire them to work to #EndSpeciesism—the misguided belief that humans are superior to all other animal species and that it’s OK for us to exploit some species in horrible ways for our own trivial purposes.

Animal Crossing: New Horizons is fantastical in many ways, but when you look a little closer, you realize that there are even more ways in which it’s realistic. While other animals don’t speak the same language we do, they really do have their own means of communication and individual personalities. By populating your island with animals such as sheep, deer, and rabbits who have strong personalities, Nintendo is reinforcing the important fact that animals are individuals.

Agnes, one of the starting villagers, is a sweet pig and a lovely neighbor. In real life, pigs are just as sweet, gentle, and kind. Mother pigs even sing to their young! But because of speciesism, humans slaughter pigs and eat their flesh, instead of recognizing them as sentient beings who deserve respect.

Another starting villager, Axel, is an elephant who loves to move and work out. Elephants in real life love to roam big open spaces with their families—but because of speciesism, humans capture, confine, and abuse them for entertainment. These magnificent animals are forced into a lifetime of misery for cruel rides and circus shows.

The premise of Animal Crossing: New Horizons should send the important message that other animals are individuals with whom we share the world—not objects for us to exploit. We are all animals—and we all deserve respect. 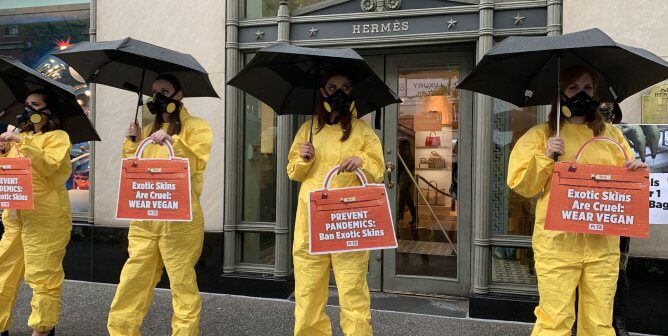 From Coast to Coast, Students Call On SeaWorld to ‘Empty the Tanks’ 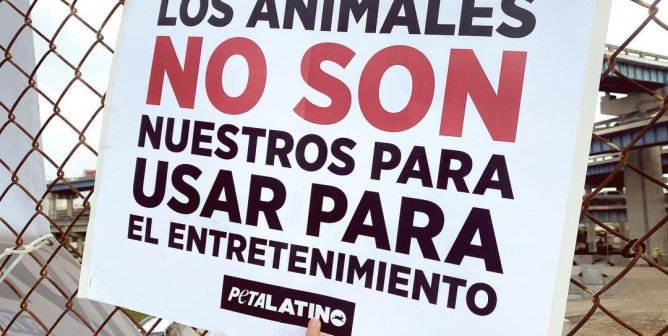