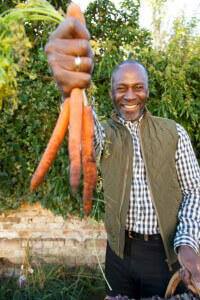 Construction is about to begin on a massive Bible museum near the National Mall in Washington, D.C., and PETA is urging the museum’s chair, Steve Green, to serve exclusively “Eden food”—vegan food, that is—in the museum’s restaurant.

As PETA’s letter points out, it makes sense to serve plant-based cuisine at the museum, since according to the first chapter of Genesis, Eden was vegan. The Bible says that when Christ comes again, there will be no hurting or killing animals—animals and humans will live in peace with one another. Leaving meat, eggs, and dairy products off the menu also honors Jesus’ call to compassion and mercy by saving countless chickens from being crammed inside dark sheds reeking of ammonia, fish from experiencing excruciating decompression and suffocation when pulled from the water, cows from having their horns gouged out or cut or burned off, mother pigs from being locked in stalls so small that they can’t turn around, and other animals raised for food from all manner of abuse.

Serving vegan meals is also a simple and impactful way to care for people and the planet: It can take up to 13 pounds of grain and 2,400 gallons of water to produce a single pound of beef (by comparison, growing 1 pound of wheat takes only 155 gallons of water)—resources that could instead be given to the millions of people who go without adequate food and clean water every day.

We’ll let you know if the Bible museum agrees to our proposal. In the meantime, we can all help to foster a world “on earth, as it is in heaven” by choosing tasty vegan foods.