Since this wildlife exploiter couldn’t put himself in the animals’ place, he ought to end up where he put them: behind bars. As felony charges mount, PETA is calling on the U.S. Department of Agriculture to stop granting Antle special treatment and shut down the wildlife-handling events that have been at the root of his alleged crimes, caused egregious suffering to animals, and lined his sleazy pockets.

Update (June 3, 2022): The FBI has reportedly just arrested Tiger King villain and Myrtle Beach Safari operator Bhagavan “Doc” Antle, whose initial hearing is reportedly set for Monday. It’s fitting that “Doc” Antle is behind bars after years of locking up the endangered animals he uses in tawdry photo ops. His legal woes are mounting, as PETA recently blew the whistle on his apparent “charity” scam, and the end to his reign of terrorizing tiger cubs can’t come soon enough.

Bhagavan “Doc” Antle operates Myrtle Beach Safari (aka “T.I.G.E.R.S.”), a South Carolina roadside zoo where baby exotic animals are torn away from their mothers so that they can be passed around for highly profitable public encounters, routinely treated as props for publicity stunts, and exploited for “likes” on social media. A decades-long PETA target, Antle is a key player in the big-cat cub-petting industry, an alleged wildlife trafficker, and the titular villain featured in Netflix’s Tiger King: The Doc Antle Story.

With a long history of violating the federal Animal Welfare Act (AWA), Antle has been cited for endangering the public and failing to provide animals with needed veterinary care, sufficient cage space, and clean water. Infamous big-cat exploiter Joseph Maldonado-Passage (aka “Joe Exotic”) has claimed that Antle puts tiger cubs who have become too old for playtime events into a gas chamber to kill them and then cremates their bodies on site.

For decades, Doc Antle has rivaled P.T. Barnum in exploiting the defenseless for his own financial gain.

Antle often misleads visitors to his operation into believing that they’re helping to fund conservation efforts. Using that as an excuse for the high price point of the dangerous hands-on encounters that he offers, he allows members of the public, including his “VIP” guests, to swim with tigers, pose with an elephant, or hold a baby chimpanzee. But remember: No true animal sanctuary or legitimate conservation organization exploits endangered animals in cruel public encounters, nor would doing so conserve these animals’ counterparts in their natural habitats.

Since he got into the animal-exploiting business nearly 40 years ago, Doc Antle has used wild animals for TV productions.

He brags that he’s taken animals onto late-night talk shows and that he exhibited animals during a live performance on an MTV awards show. These were undoubtedly loud, frightening situations for the animals to endure, and they surely experienced stress and suffering. Now that no chimpanzees are used in Hollywood—thanks in part to overwhelming public opposition to their exploitation—Antle settles for parading chimpanzees around on social media.

Since early on in his career, he’s been cited for various animal welfare violations.

He’s also been called out by authorities for the following: 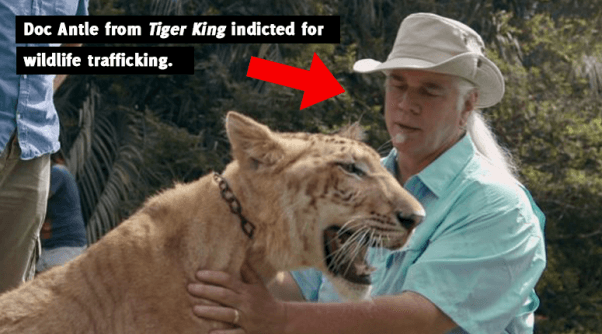 The USDA told Antle in 2005 that his public photo ops with adult big cats violated the AWA, but it has repeatedly let him get away with these dangerous encounters since then. PETA is calling on the agency to stop standing by and letting him endanger vulnerable tigers.

Doc Antle has no qualms about tearing babies away from their mothers.

He regularly churns out big-cat cubs for use in public encounters. But where do these baby tigers go when they outgrow their profitability? Antle keeps some on his property to be used as breeders. He uses others in a theatrical display during public tours. And he ships some tigers off to exploitative exhibitors:

Where do cubs end up when #TigerKing’s Doc Antle is done with them? Even a former Myrtle Beach Safari “apprentice” didn’t know, but PETA found out these tigers were dumped with an abuser that’s just as bad. https://t.co/Wi6OFetdnt pic.twitter.com/TdxAvmESdF

Antle also has a history of acquiring big cats from shady exhibitors across the country:

On its federal tax returns, the Rare Species Fund reports that most of its expenses—more than two-thirds on average—go toward direct animal care, not international conservation work. However, the animals receiving this care appear to be those who reside at Antle’s for-profit roadside zoo, Myrtle Beach Safari.

The Rare Species Fund claims the roadside zoo as one of its “conservation projects” and identifies its “animal ambassadors” as the same animals Antle exploits for his own financial gain.

Antle thus appears to be using the Rare Species Fund’s income to offset the costs of his own for-profit business activities, in violation of the nonprofit’s tax-exempt status. He also appears to have made numerous material misrepresentations on the nonprofit’s tax returns in order to hide its connections to his roadside zoo and evade paying taxes.

In addition to these violations of the federal Internal Revenue Code, Antle appears to be violating charitable solicitation laws in Florida and South Carolina by soliciting donations from the public for the primary purpose of international wildlife conservation, then using the proceeds of those solicitations to pay for the direct care of animals at Myrtle Beach Safari, a for-profit roadside zoo with zero conservation value.

Take Action for Tigers and Other Animals

Please urge Myrtle Beach Safari to end its cruel public encounters and send the animals to reputable facilities where they could live in peace and get the care that they deserve. It only takes a minute using your phone or computer, so what are you waiting for?