Torture-for-hire laboratory Covance performs invasive, painful experiments on dogs, monkeys, and pretty much any other living animal its clients desire and has never seemed overly concerned with things like the Animal Welfare Act—the single federal law that provides minimal protections to some animals being used in experiments. So it’s not exactly shocking that, once again, the U.S. Department of Agriculture (USDA) is issuing a slew of citations against the hired scalpels. This time, Covance is letting dogs lie in each other’s waste and feeding them insect-riddled food. 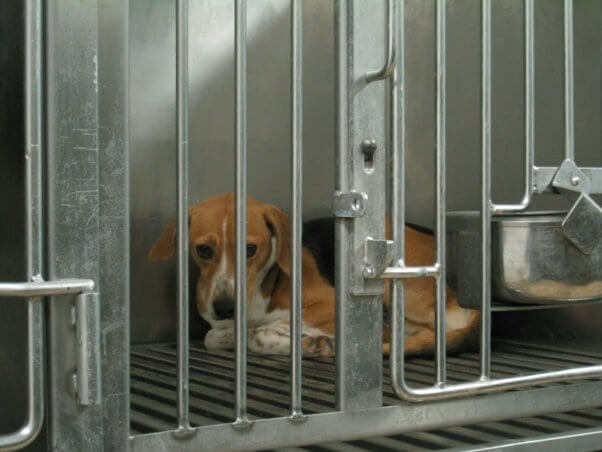 Dogs experimented on in laboratories suffer loneliness, fear, and pain.

Among the laboratory’s latest round of violations, federal inspectors found that dogs’ cages were stacked on top of one another and that waste ran down the walls from one cage to the next. They also determined that Covance fed the dogs food that was contaminated with insects. They found a dog with an ulcerated mass on her mammary gland, another who had little fur and was covered with scabs, and a young male beagle with red and inflamed ears, abdomen, groin, paws, toes, armpits, and lips. A rabbit at another Covance laboratory had a bell lodged in his or her mouth and had to be euthanized.

It’s all par for the course at Covance, as PETA has been exposing for years. Our eyewitness investigation showed that workers slammed monkeys into cages and sprayed them with pressure hoses. In 2016, the USDA slapped the laboratory with a $31,500 fine after it let 13 macaque monkeys bake to death because no one noticed that the thermostats in their rooms weren’t working. Not surprisingly, CEO John Ratliff claimed the top spot on PETA’s list of the worst CEOs.

Covance is one of the largest importers into the U.S. of monkeys who are to be experimented on and killed. But we can change that. Please urge one of the last airlines in the world that still ships monkeys to laboratories to stop transporting primates for use in experiments.

Stop Shipping Primates to Their Deaths