Update (August 19, 2022): PETA sends our congratulations to journalist Rob O’Dell for winning the National Press Club’s Ann Cottrell Free Animal Reporting Award—which honors excellence in reporting about animals—for his series of scathing articles in The Arizona Republic that revealed death and disease at the University of Washington’s (UW) monkey-breeding facility in Mesa, Arizona. (Details appear below.)

Congrats to Rob O'Dell of the Arizona Republic for first place in health, medical and science writing by an individual or team for “Mesa monkey farm” @robodellaz @azcentral – https://t.co/dsbS6pj7Dc

In addition, the series—which also won a first place National Headliner Award for health, medical, and science writing—revealed that UW had sent diseased monkeys to experimenters across the country.

The National Institutes of Health (NIH) has known about the problems at the Washington National Primate Research Center (WaNPRC) and its breeding facility for years yet has continued to use taxpayer dollars to fund experiments that the agency’s own scientists acknowledge were tainted by the unintended infections ravaging the monkeys. But there’s now no hiding the truth. NIH must stop funding the WaNPRC and its breeding facility and put an end to this animal suffering and bad science. Take action below.

As reported today in The Arizona Republic, the Washington National Primate Research Center (WaNPRC) and its monkey-breeding facility in Mesa, Arizona, have violated health and veterinary regulations, operated without state oversight, failed to prevent the introduction and spread of deadly diseases among monkeys, and been repeatedly cited for multiple violations of animal welfare laws—all of this while breeding monkeys next to a toxic waste site.

PETA researchers and scientists uncovered these violations by combing through tens of thousands of university and federal records and talking to multiple industry insiders. These records show that officials at both the University of Washington (UW)—which runs the WaNPRC and the satellite facility in Mesa—and the National Institutes of Health (NIH), which funds them, were aware of the issues but failed to take any meaningful actions to correct them.

PETA tried repeatedly to meet with UW President Ana Mari Cauce and NIH Director Francis Collins, who recently announced his resignation. However, both refused. We then went to the Washington State Department of Agriculture, which confirmed the violations we found. Next, we went to The Arizona Republic.

Below is a taste of the toxic mess we uncovered. 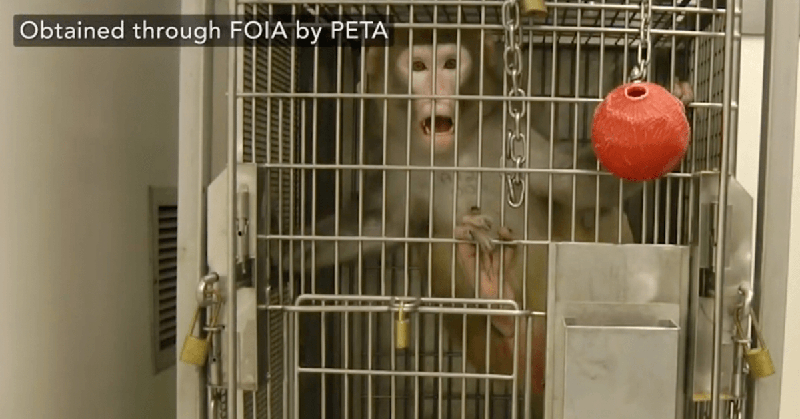 The WaNPRC has failed to keep disease out of its supposedly pathogen-free pig-tailed macaque breeding colony in Mesa—the largest macaque colony of its kind in the country.

WaNPRC scientists are fully aware that these infectious agents confound research data but continue to use the exposed macaques anyhow. Publications—including some authored by the WaNPRC itself—have shown that experimenting on monkeys exposed to and/or infected with valley fever, Chagas disease, or other illnesses caused by blood-borne pathogens can compromise the results.

What’s more, the presence of monkeys with these infections does the following:

It seems clear that WaNPRC scientists don’t care about monkeys, but apparently, they’re not interested in good science, either.

In the 1960s, Nammo Talley—a leading supplier of ammunition, missile products, and demilitarization services—began manufacturing weapons, aerospace equipment, and propellant at a facility in Mesa. By 1996, it was known that the company’s operations had resulted in the release of lead, perchlorates, volatile organic compounds, and other contaminates into the soil and groundwater at the site and neighboring properties.

Today, the WaNPRC’s macaque-breeding compound is one of those neighboring Mesa properties. UW leased the property—where a chimpanzee laboratory had previously been located—in 2012. In 2014, it was revealed that the wells supplying the main water sources to the facility were contaminated with perchlorate at levels that exceeded the U.S. Environmental Protection Agency’s acceptable concentration levels. By 2015, the Arizona Department of Environmental Quality informed UW officials that the breeding facility’s wells were contaminated. But operations continued there nonetheless. This means that officials at UW have known about this threat for at least six years, but they’ve apparently done nothing.

Ingesting toxic contaminants not only wreaks havoc on monkeys’ development and health but also undermines the results of experiments later performed on these unfortunate animals.

Skirting the Law, Endangering Animals and the Public

UW’s decision to place its pig-tailed macaque breeding colony on the Salt River Pima-Maricopa Indian Community (SRPMIC) in Mesa has enabled the WaNPRC to skirt all oversight by the Arizona Departments of Agriculture and Health Services as well as the Arizona Game and Fish Department. Officials and residents of Arizona are unaware that illnesses such as Chagas disease and cholera have been brought into their state.

The WaNPRC similarly exploits the SRPMIC by contaminating its native lands with pathogens that can be transmitted in the feces, urine, and blood of the monkeys.

WaNPRC has had eight directors in the last 10 years and recently announced the appointment of Michele Basso as its new director. Basso is notorious for being one of the few university experimenters ever to be suspended from using animals as a result of serious welfare violations. Read more about her appalling history.

Help Shut Down This Toxic Dump and Get the Animals Retired!

What this breeding facility is doing isn’t just pointless, dangerous, and cruel—it’s also a terrible waste of lives and important research dollars. Plus, even after monkeys leave this compound and its toxic tap, they still face a lifetime of terror while being used for experiments elsewhere.

PETA is calling on NIH to stop funding this operation.