Update: Victory! The two bears at Tregembo Animal Park have been rescued. In their new home at the spacious, lush Wild Animal Sanctuary in Colorado, Ben and Bogey now receive expert veterinary care and live in a vast habitat, in which they can climb, dig, and run. They’ll also have the opportunity to hibernate this year—possibly for the first time in their lives.

The following was originally published on June 15, 2015:

PETA has been campaigning against North Carolina’s decrepit Tregembo Animal Park for years. Our latest complaint involved a visibly suffering black bear, whom a visitor spotted languishing with severe facial lesions and painful irritation to his eyes, nose, and mouth.

After reviewing photographs of him, the PETA Foundation’s wildlife veterinarian, Dr. Heather Rally, reported that the bear appears to have an extreme and chronic case of inflammation of the cornea (keratitis)—meaning that he has been experiencing so much swelling and irritation of the cornea for so long that the clear tissue of the cornea has actually been replaced by fibrous tissue. As a result, the bear is most likely completely blind and has been in pain for a long time. 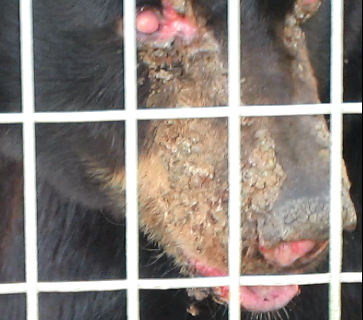 After we filed a complaint with the U.S. Department of Agriculture (USDA), an inspector noted that the bear was “suffering” and cited the facility for failing to provide him with adequate veterinary care. Shortly thereafter, the zoo was cited again for the very same reason.