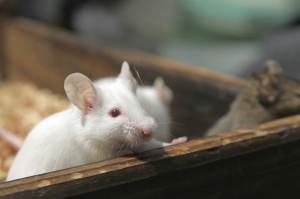 For those with a loved one who is suffering from Alzheimer’s disease, the recent news that more than 99 percent of Alzheimer’s drugs failed in human trials after passing animal tests must have felt like a punch to the stomach. It’s yet another example of why trying to cure human diseases by experimenting on animals is cruel and ineffective. But there is hope: Brilliant new research that uses human cells—instead of genetically modified mice—to study the cause of the disease and ways to treat it has the potential to help countless patients and save thousands of animals’ lives.

Dr. Eric Hill, a scientist at the U.K.’s Aston Research Centre for Healthy Ageing, is using skin cells from Alzheimer’s patients to grow brain cells in Petri dishes. The skin cells are “reprogrammed” to become stem cells—the master cells of the human body—which are then turned into neurons and astrocytes (brain cells).

According to Dr. Hill, “Not only could the study result in an increased understanding of the causes of the disease and how to successfully treat it, but also it may lead to pharmaceutical companies reducing by many thousands the number of transgenic mice they use per year in Alzheimer’s research.”

Another researcher, Professor Paul Lawrence Furlong at Aston University, is using human brain imaging to find a method of early detection for dementia.

Cutting-edge non-animal research methods for Alzheimer’s and other diseases are leading to real breakthroughs, and PETA and our international affiliates are working to make sure scientists have the resources that they need in order to continue this pioneering research. The PETA International Science Consortium, Ltd., works to promote, fund, and implement non-animal research methods worldwide, and PETA U.S. and PETA U.K. have already donated more than $1.5 million to the development and implementation of non-animal methods.

Hope is in sight for both patients and animals as more scientists embrace advanced and lifesaving animal-free research methods. Check back here often for more exciting developments.