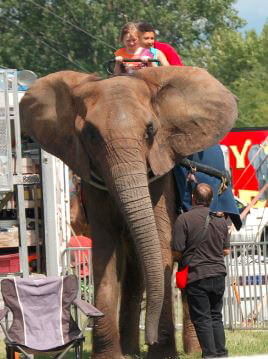 Anna Louise, an African elephant exhibited by handler Tom Demry—who toured with numerous circuses that use animals—is believed to be at peace at long last. One of the loneliest elephants in the U.S., she was without a companion of her own species for roughly 30 years, since at least 1988—which is extremely stressful for social animals like elephants. She was captured from her home in Zimbabwe and forced to endure a miserable life in the circus here in the U.S. Demry made her “dance,” carry a tambourine with her trunk, and give rides to humans.

Based on newly obtained records, PETA believes that Anna Louise died shortly after she was “retired” at Two Tails Ranch in Florida—a roadside zoo operated by circus exhibitor Patricia Zerbini, where, in 2014, an elephant nearly crushed a woman to death. African elephants can live to be 70 years old. Anna Louise was in her mid- to late 30s. Demry is no longer licensed by the U.S. Department of Agriculture.

Anna Louise’s story is heartbreaking—but not unique. Elephants and other animals used in circuses are typically separated from their mothers as babies. They spend most of their lives in cages or shackles and are usually forced to eat, sleep, and defecate in the same space. They’re routinely denied the opportunity to exercise and socialize and may be denied access even to basic necessities, such as nutritious food, clean water, adequate shelter, and appropriate veterinary care.

Elephants used for entertainment often show signs of frustration and psychosis, along with physical ailments such as obesity, foot problems, and arthritis, which can cause intense suffering and premature death. In their natural habitats, female elephants stay with their families for life and spend much of their time exploring vast habitats, socializing, and foraging for food.