Multiple times every day, each one of us has a choice. With what we eat and wear, the products that we purchase, and the recreational activities that we pick, we can choose either to hurt or help animals. For decades, PETA has been encouraging everyone to choose compassion, and we’ve seen a global shift in the way humans view other species. For one of our thought-provoking campaigns, we’ve been strategically placing “I’m ME, Not MEAT” ads in places where they’ll be most effective as compelling reminders of the individuals used for meat and dairy. 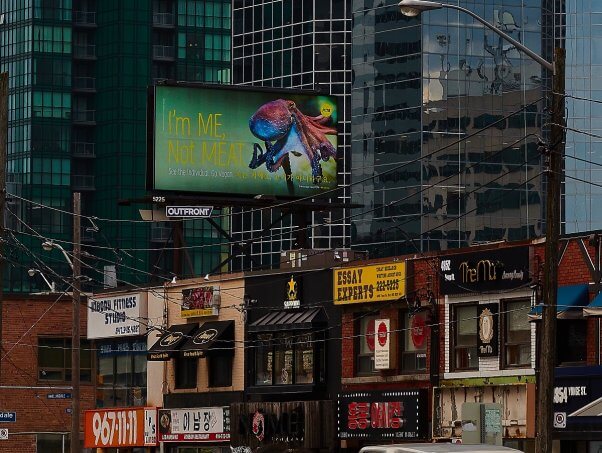 When meat-centric Florida restaurant Miami Smokers went back into business, the Miami Herald reported, “This mecca for smoked meats has reopened—and no pig in Miami is safe.” PETA contacted the owners and requested that they at least offer some animal-free dishes, but they never responded. So we asked Miamians to choose humane foods—with a pretty pig placed right across the street. 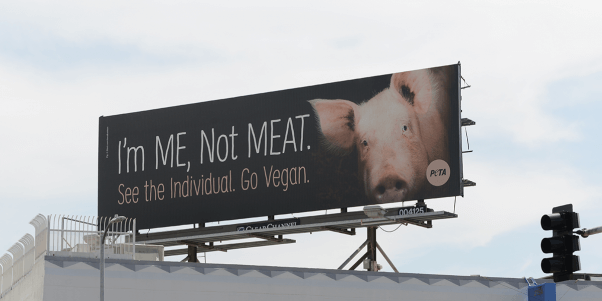 Ninety-seven percent of pigs in the U.S. today are raised on factory farms, where they’ll never run across sprawling pastures, bask in the sun, breathe fresh air, or do anything else that’s natural and important to them. Pigs—and all other animals—deserve better. 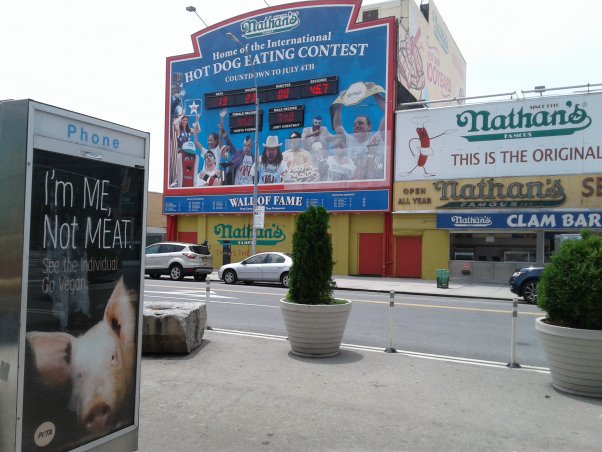 We had this colorful crab stationed outside the Baltimore Seafood Festival and within pinching distance of several seafood restaurants. She asked diners to remember that crabs have unique personalities and value their own lives, and they don’t want to be impaled, torn apart, decapitated, or boiled alive. 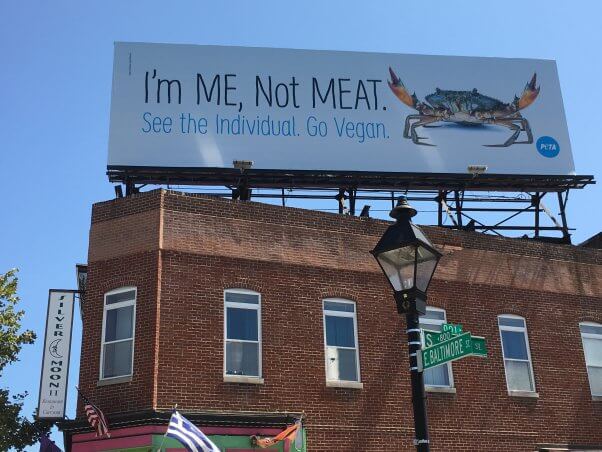 Our crab also visited Miami Beach, Florida, where she floated along next to the South Beach Seafood Festival. 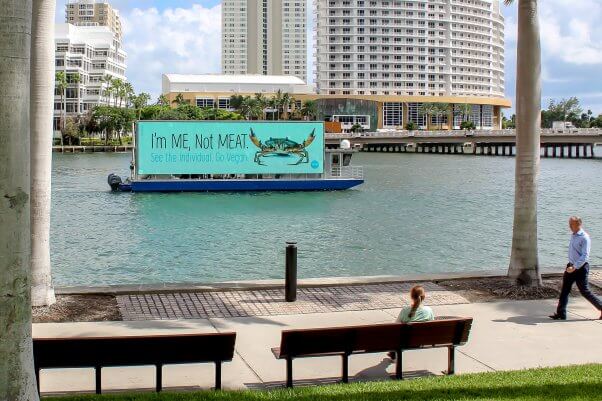 In advance of the Italian celebration Feast of the Seven Fishes, our school of fish swam into several Italian American neighborhoods across the country, including this one in Roseto, Pennsylvania, the first all-Italian borough in the U.S. 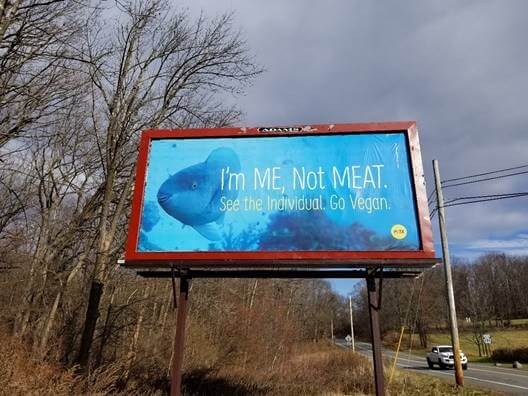 Numerous studies have definitively proved that fish feel pain. But even though more of these intelligent, sensitive animals are killed for food each year than all other animals combined, they have no legal protection from abuse. Fish slowly suffocate or are crushed to death when they’re dragged from the sea in huge nets. Survivors are cut open. PETA has placed several of these ads asking everyone to choose great-tasting vegan fish and leave the animals in their ocean homes. 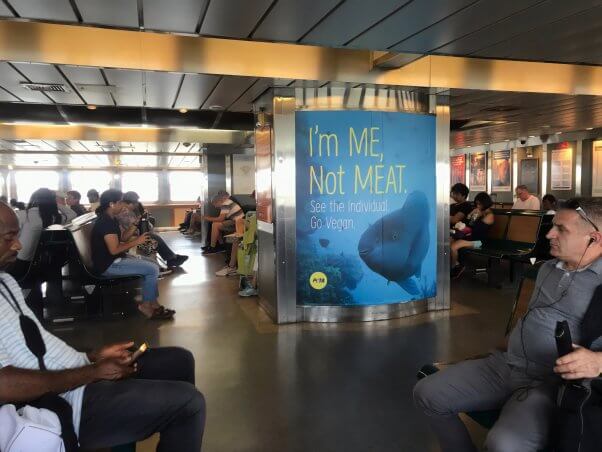 People in New York on their way to a Buffalo Bills football game—or any of the surrounding sports bars in the reported home of the Buffalo chicken wing—were greeted by PETA’s chirping chicken, who was asserting her individuality as well. 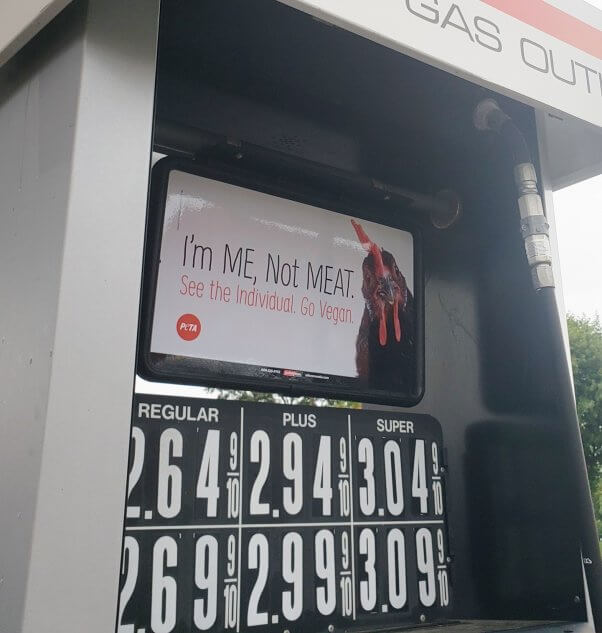 Chickens are often considered the most abused animals on the planet. They are even excluded from the meager protections of the Humane Slaughter Act. Most chicks are only 6 or 7 weeks old when they’re shackled upside down, their throats are slit open by machines, and they’re immersed in scalding-hot water to remove their feathers. Many are conscious the entire time. We can do better by these gentle, family-oriented birds. And we have to. 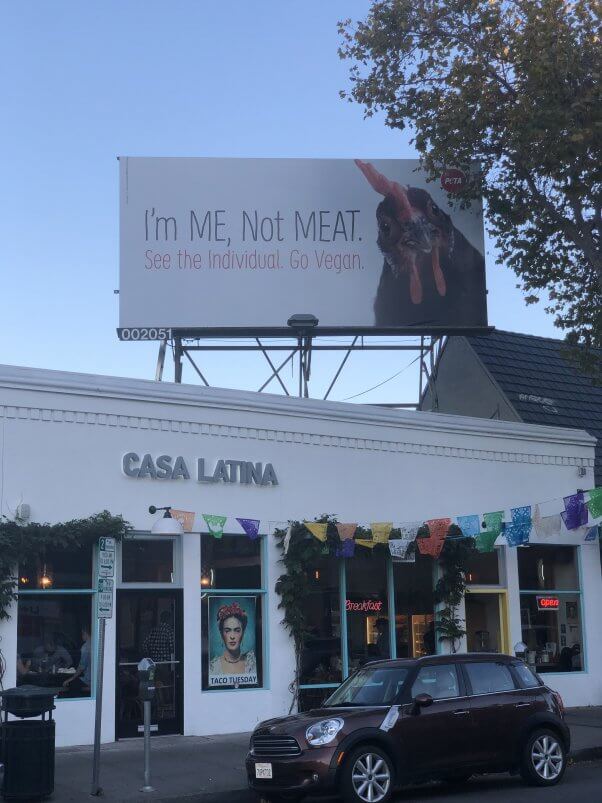 Our bighearted lobster raised a claw in support of lobster liberation after people in New Brunswick, Canada, complained about the smell from a lobster shell–recycling plant. 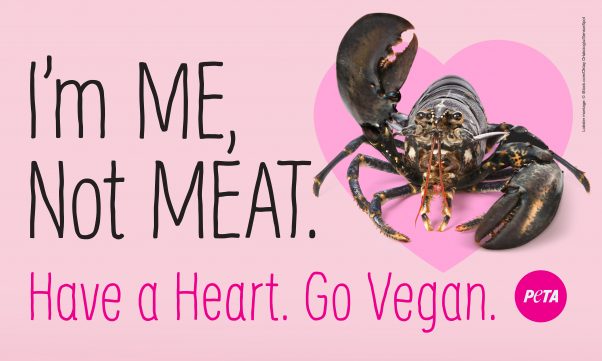 “The whole lobster industry stinks, and anyone upset about the smell emanating from the Omera Shells factory might also be appalled that sensitive crustaceans are tossed into a pot of water and boiled alive,” said PETA President Ingrid Newkirk. 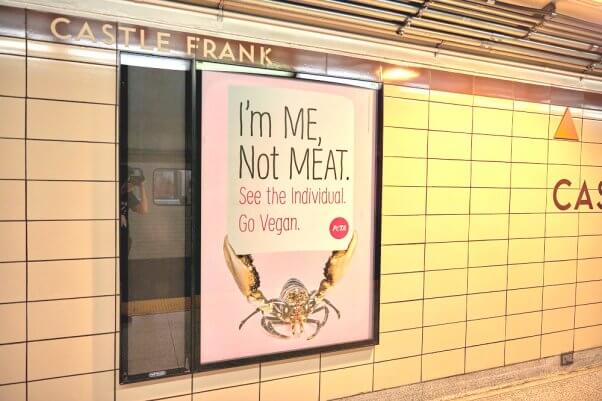 A brave cow in Bloomfield, Connecticut, managed to escape from a slaughterhouse—only to be knifed by slaughterhouse workers in a nearby Home Depot parking lot. The story was covered by news media across the country, and PETA placed these sweet cows on local buses and informed folks that cows are gentle giants, curious and clever, and they endure unimaginable suffering when they’re strung up by one leg and their throat is slit. 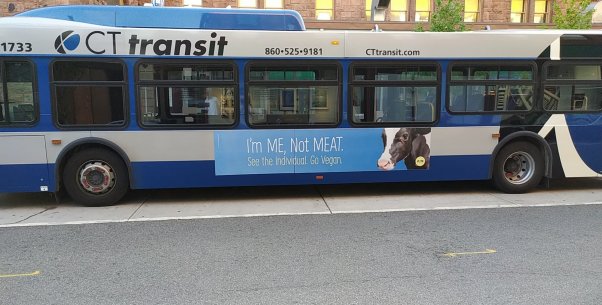 Vegan options are exploding in restaurants and grocery stores, and PETA will continue to advocate for every animal, as they all value their own life and don’t want to die.

Choose compassion! Always leave animals off your plate and your shopping list, and adopt a vegan lifestyle. We’re here to help!