Top 10 Reasons Not to Eat Cows

There are so many reasons not to eat cows, but here are our top 10:

1. Your Body Will Thank You

Eating beef products is a good way to expand your waistline and increase your chances of becoming impotent and developing heart disease, diabetes, arthritis, and other health conditions. Research has shown that vegetarians have 40 percent the cancer rate of meat-eaters. Plus, meat-eaters are nine times more likely to be obese than vegans are. Every time you eat animal-derived foods, you’re also ingesting fecal material, antibiotics, dioxins, and a host of other substances, some toxic, that can accumulate in your body and remain there for years.

Cows are gentle social animals. They have the ability to recognize more than 100 other cows, and they form close friendships with members of their herd. Researchers report that cows grieve when their friends or family members die.

Learn more fascinating facts and read awe-inspiring stories about cows and other animals in the bestselling book Animalkind. 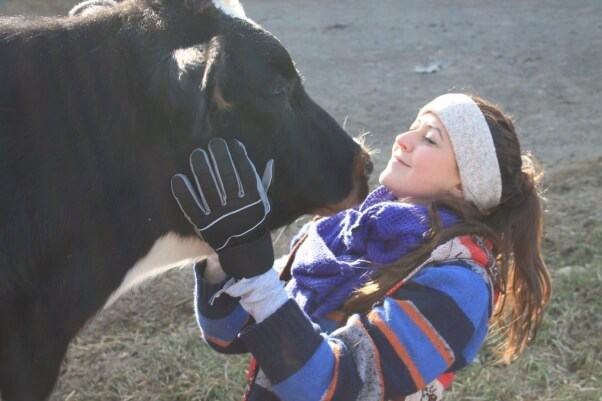 To make cows grow at an unnaturally fast rate, the cattle industry implants them with pellets full of hormones. While low levels of naturally occurring hormones are found in various foods, many scientists are concerned that the artificial hormones injected into cows cause health problems in humans who eat them. Many of these hormones are illegal in many countries. Not so delicious, right?

4. No One Should Be Tortured

Cows endure routine mutilations, including branding, castration, and dehorning, that cause excruciating, prolonged pain—all without painkillers. After months on a severely crowded feedlot, they are then shipped without food or water to a slaughterhouse, where a metal rod is shot through their brains, they are hung upside down, and their throats are slit. Because line speeds are so fast, many animals are still conscious throughout the process. Learn more about cows used for food.

Runoff from factory farms and livestock grazing is one of the leading causes of pollution in our rivers and lakes. The U.S. Environmental Protection Agency notes that bacteria and viruses can be carried by the runoff and that groundwater can be contaminated. Numerous studies and government reports have shown higher rates of miscarriages, respiratory problems, and neurological diseases among people who live near factory farms.

By some estimates, animal agriculture is responsible for more greenhouse gases than all of the world’s transportation systems combined. According to the United Nations, a global shift toward vegan eating is vital if we are to combat the worst effects of climate change.

Howard Lyman was a fourth-generation cattle rancher who went vegan after learning about the effects of factory farming—he now tours the country promoting a vegan lifestyle.

A few cows have managed to escape from slaughterhouses. One named Emily got away from a Massachusetts slaughterhouse, leapt over a 5-foot gate, and survived for several weeks in the woods during the New England winter before she was rescued. While some escapees like Emily and Freddie (below) are released to sanctuaries, the millions of nameless cows killed by the meat industry each year aren’t so lucky.

9. Eating Meat Is Stealing Food From People in Need

It’s inefficient to grow grains and other feed crops for animals—only a fraction of what we feed them is actually turned into flesh that humans can eat. The vast majority is used by the animals to live and grow.

The highly respected Worldwatch Institute says, “In a world where an estimated one in every six people goes hungry each day, … grain is used more efficiently when consumed directly by humans. Continued growth in meat output is dependent on feeding grain to animals, creating competition for grain between affluent meat eaters and the world’s poor.”

10. Plant-Based Meat Is Better Than Ever

Leaving cows and other animals off your plate is easier than ever. You can now get tasty veggie burgers at numerous restaurants, including Denny’s, Johnny Rockets, and White Castle. Check out our favorite beef replacements, all of which are delicious and cholesterol- and cruelty-free.

For your health, for the planet, and for cows, go vegan!