Yep, you read that right.

We want to thank Kanye West for the shout-out to PETA in his new song, “Theraflu.” While the aptly named tune does make us want to reach for an over-the-counter remedy as Kanye opines about his inexplicable penchant for slinging tortured dead animals across his back, the song did make #tellPETA trend on Twitter worldwide, giving us a great opportunity to educate people about the revolting cruelty of the fur industry. #TellKanye that 60 beautiful minks have to die to make one ugly coat.

The cover of the May issue of Vanity Fair features the fair face of fur foe Grace Park, looking as stunning in white as she did in her PETA “Save the Seals” ad.

Mickey Rourke saved a stray dog he found on a movie set in Romania. Now Foxy has a great new home with Rourke and his other beloved pups, including Jaws, who stars with Rourke in his animal birth control ad: 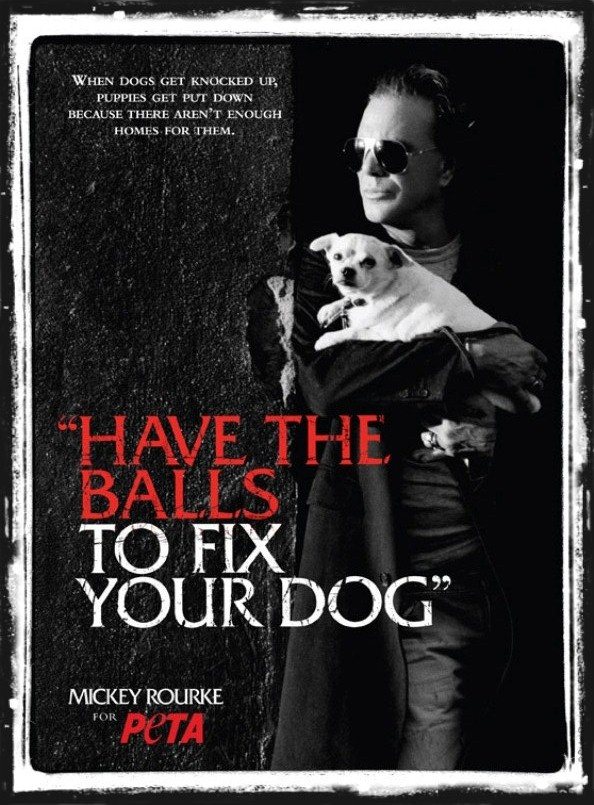 When Pamela Anderson visited Turkey and noticed that the country’s streets were also teeming with strays, she went on a mission to persuade officials there to adopt an aggressive spay-and-neuter campaign.

Ryan Gosling was a savior for a woman who was almost hit by a taxi in New York City. His lifesaving heroics for people and advocacy for chickens make Ryan a heartthrob with a heart of gold.

Lance Armstrong seems to be made of steel, and now he’s living strong thanks to eating mostly vegan foods.

A vegan eatery led to love for Alec Baldwin, who got engaged this week to Hilaria Thomas, whom he met at Pure Food and Wine.

Christina Aguilera took both her loves—her boyfriend and her son—to Cirque du Soleil, scoring herself a thank-you card from PETA for supporting a circus with only human performers.