Ryan Gosling has certainly earned his cape this month. First, he broke up a street fight in Manhattan. Then, the Academy Award-nominated actor leapt to the defense of chickens and turkeys on factory farms. Gosling wrote a letter to the U.S. Department of Agriculture (USDA) on PETA’s behalf calling on the agency to revoke its approval of a foam-based extermination method that kills birds by submerging them in foam to slowly suffocate them. This process can take up to 15 minutes and is as traumatic and panic-inducing as killing birds by choking them, strangling them, smothering them, or burying them alive. 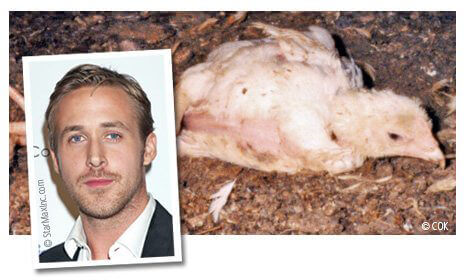 “If dogs and cats were killed in this way, the person committing these acts would be charged with cruelty to animals,” Gosling wrote. He went on to urge the USDA to put its stamp of approval on a less cruel alternative that uses carbon dioxide to painlessly render birds unconscious and that has already been approved by veterinary experts.

This isn’t the first time that Gosling has flexed his impressive muscles in birds’ behalf. He previously wrote to KFC and McDonald’s urging the fast-food chains to adopt PETA’s proposed animal welfare reforms.

We just love a guy who has such a drive to stick up for chicks. You can be a hero for animals, too—don’t patronize McDonald’s or KFC.