Paris is the City of Love, but Air France’s annual meeting was full of anything but. PETA owns stock in Air France, so our proxy popped up during the annual meeting to let the other stockowners know that the company is the only major airline in the world that is still willing to accept blood money for shipping primates to be tortured and killed in experiments and ask when the practice will end—a question that was met by applause from the audience. That won’t exactly look good in the meeting minutes. And what was going on outside the meeting didn’t look good for the company, either, as PETA France supporters sat in cages to show Parisians what primates endure after Air France dumps them at laboratory hellholes. 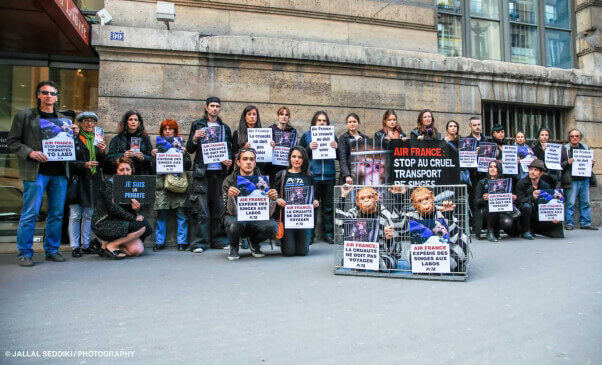 And PETA used shareholder activism tactics to work toward change at three other companies this month, too:

Attending annual meetings not only exposes how companies are using animals in tests but also informs other stockholders about cruelty that could hurt a company’s bottom line. PETA continues to work to change company policies from the inside out, including through more shareholder actions later this month.