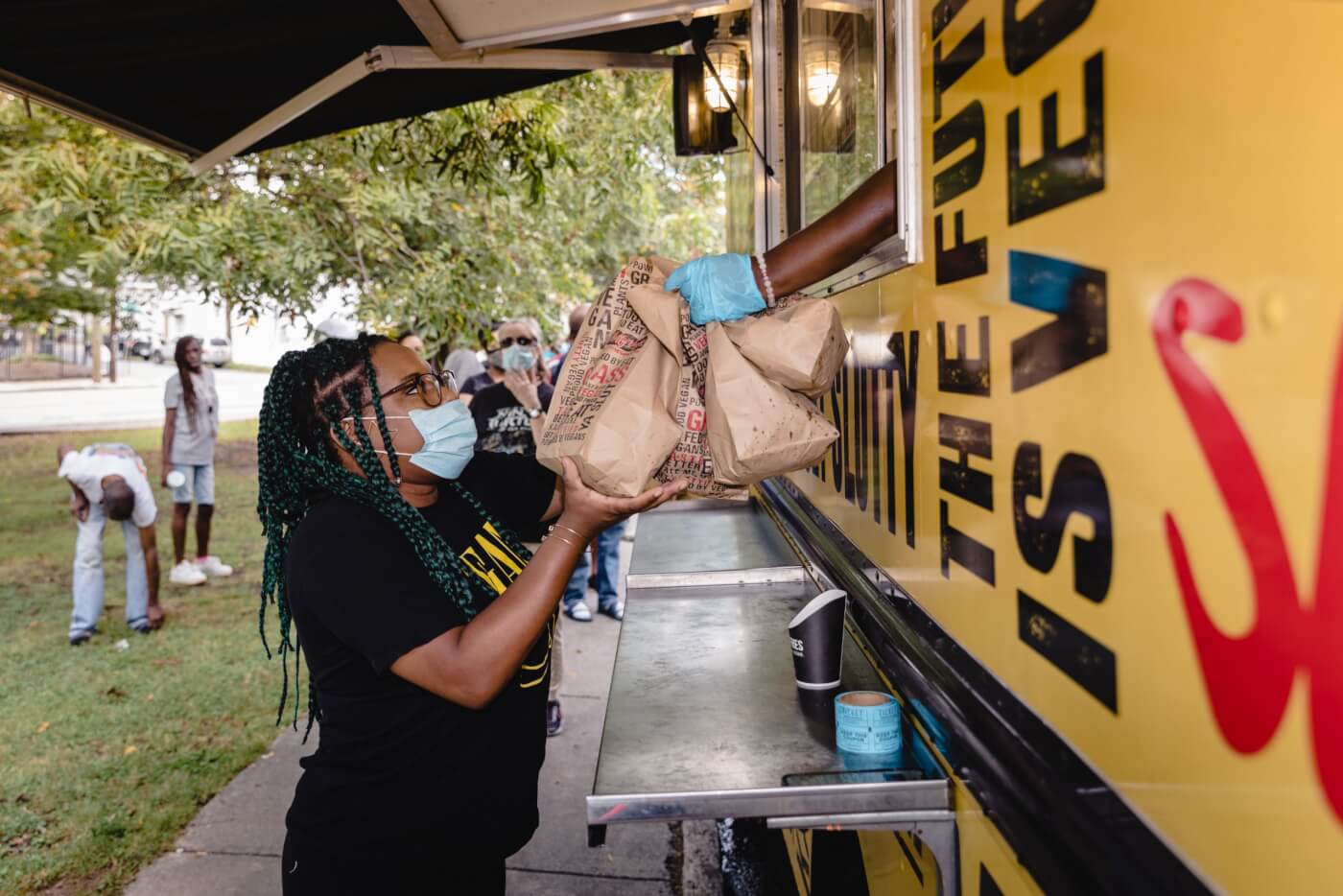 PETA’s vegan food giveaway events are part of our national campaign, which calls on government officials to stop propping up the meat, egg, and dairy industries with taxpayers’ money and instead redirect those funds to subsidize incentives for grocers in food deserts to stock fresh vegetables, fruits, and other healthy, humane vegan foods.

See how our vegan food giveaway events are bringing communities together in the fight for food justice: 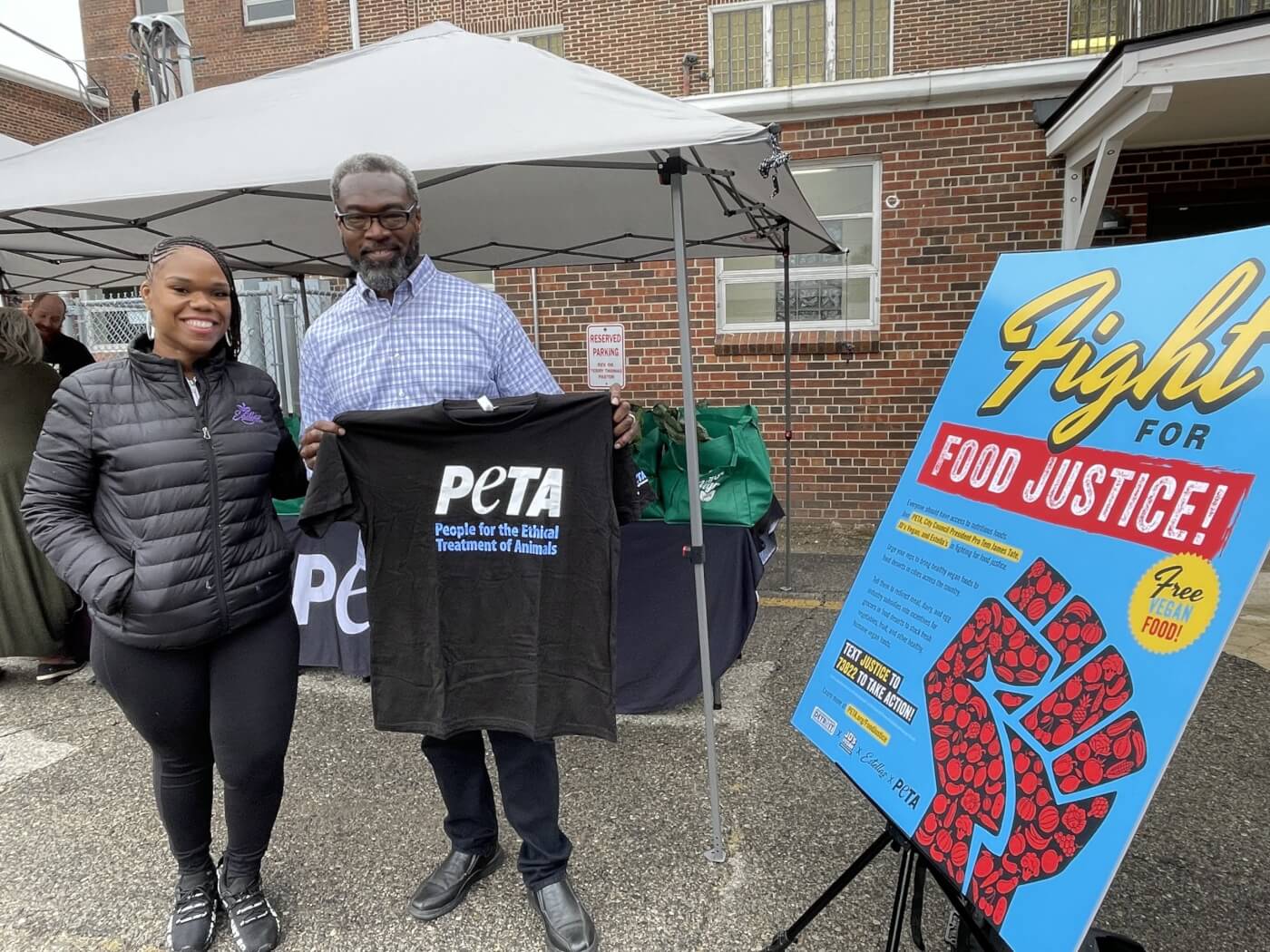 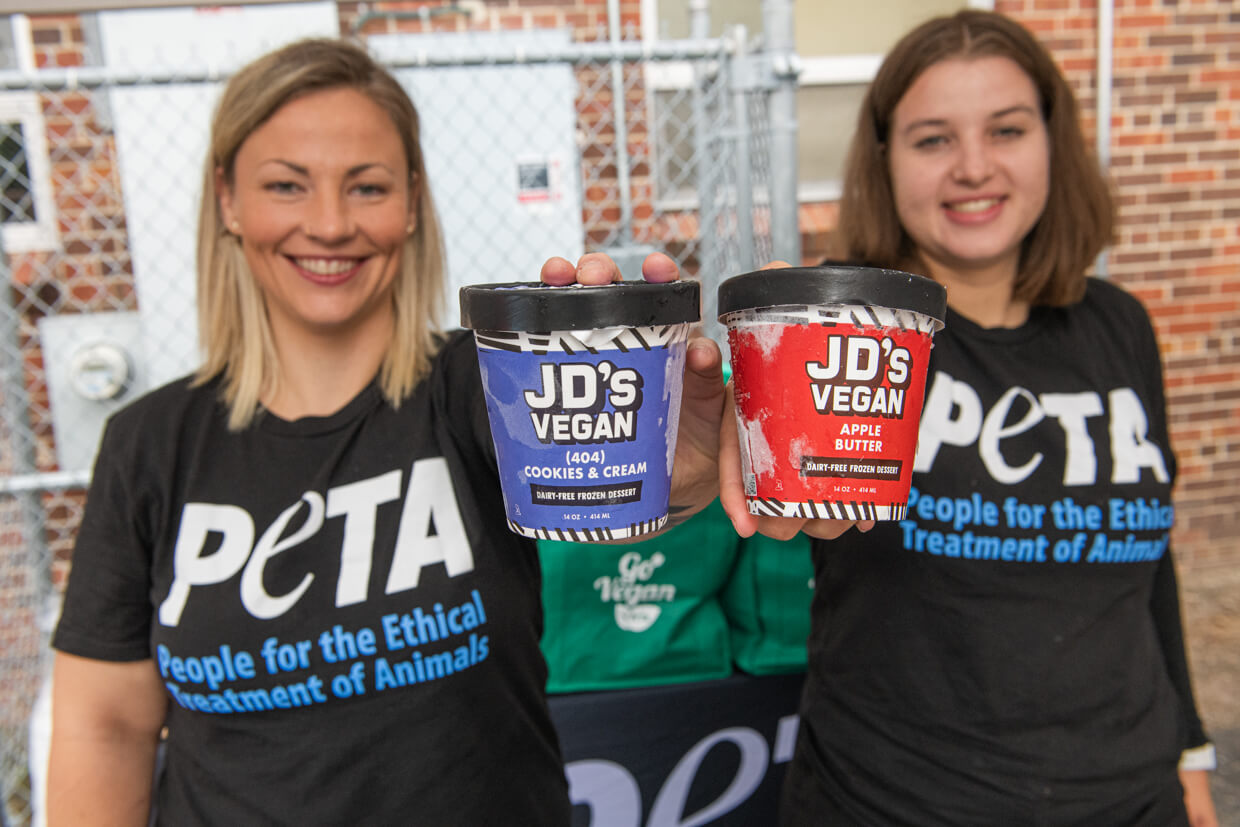 Rachelle Owen—the senior director of PETA’s Students Opposing Speciesism and a Detroit native—spoke about the food justice initiative at Tate’s District 1 meeting ahead of the giveaway. She encouraged residents to urge Michigan state legislators to redirect funds that prop up the cruel, environmentally destructive meat, egg, and dairy industries to provide grocers in food deserts with incentives to stock vegetables, fruits, and other healthy vegan foods—and to enjoy fresh, delicious, humane food after the event. 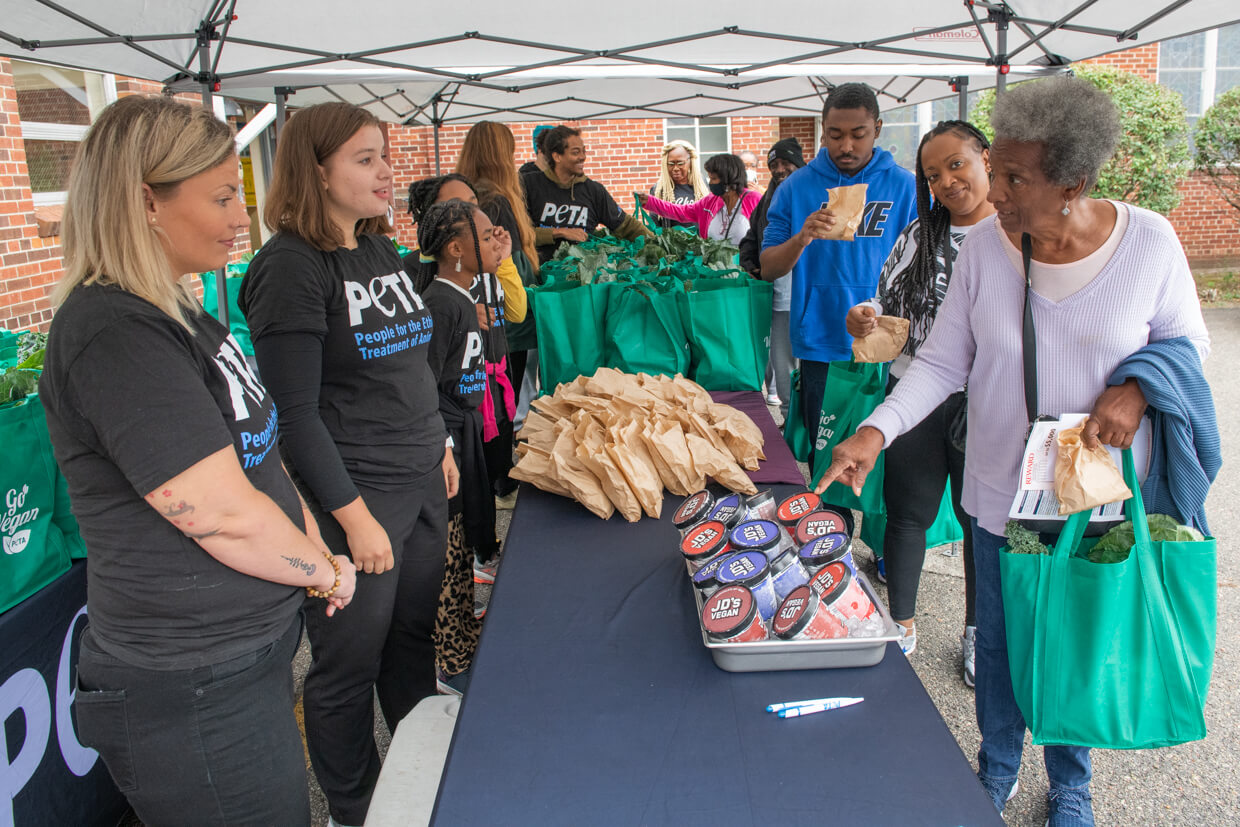 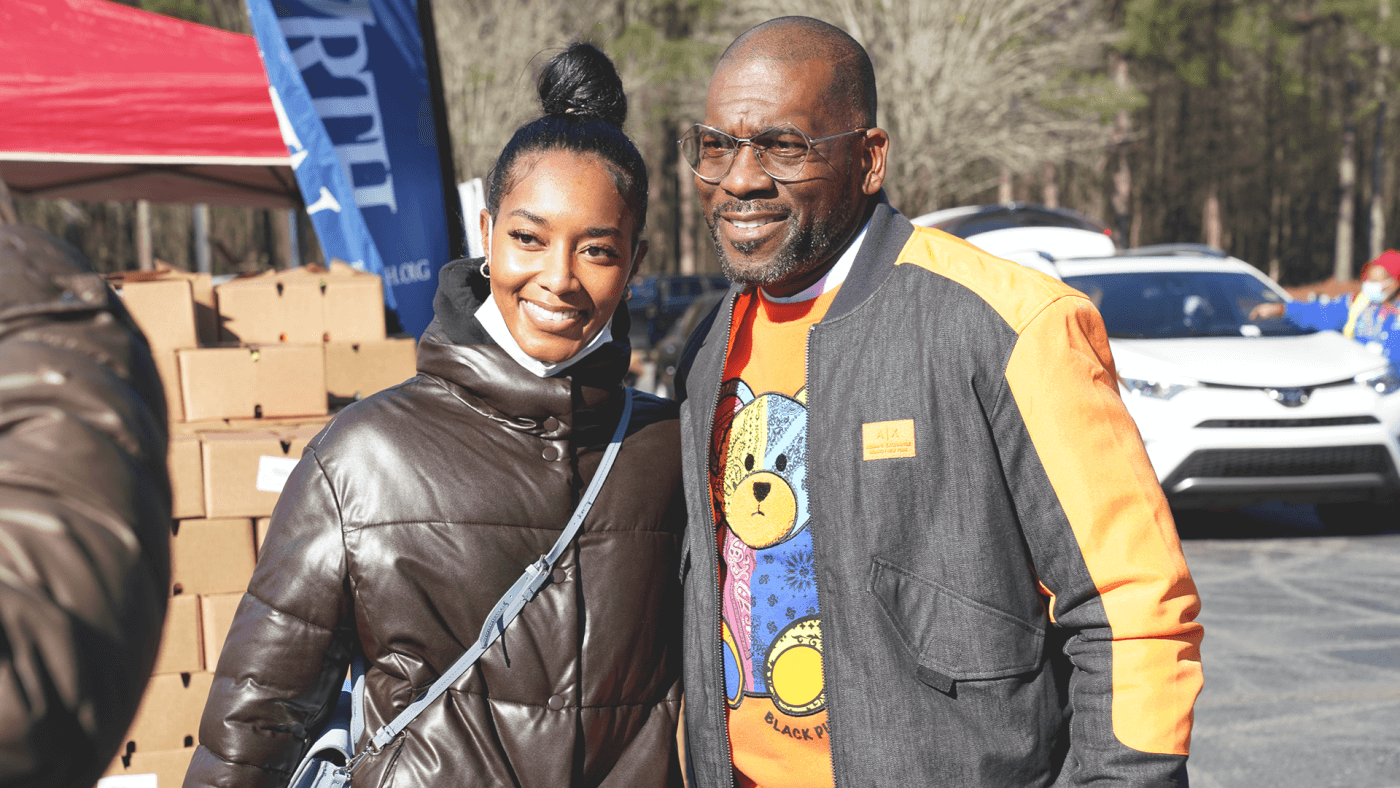 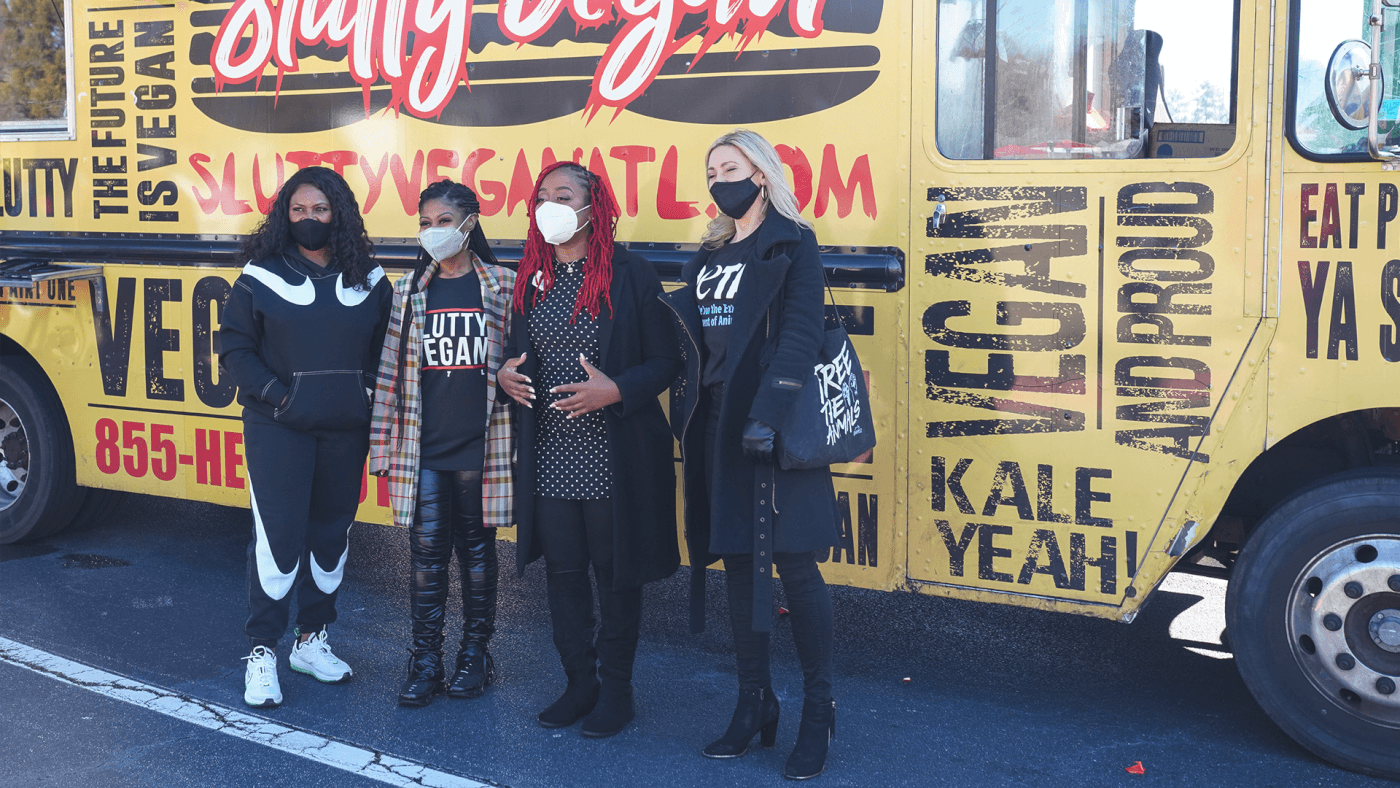 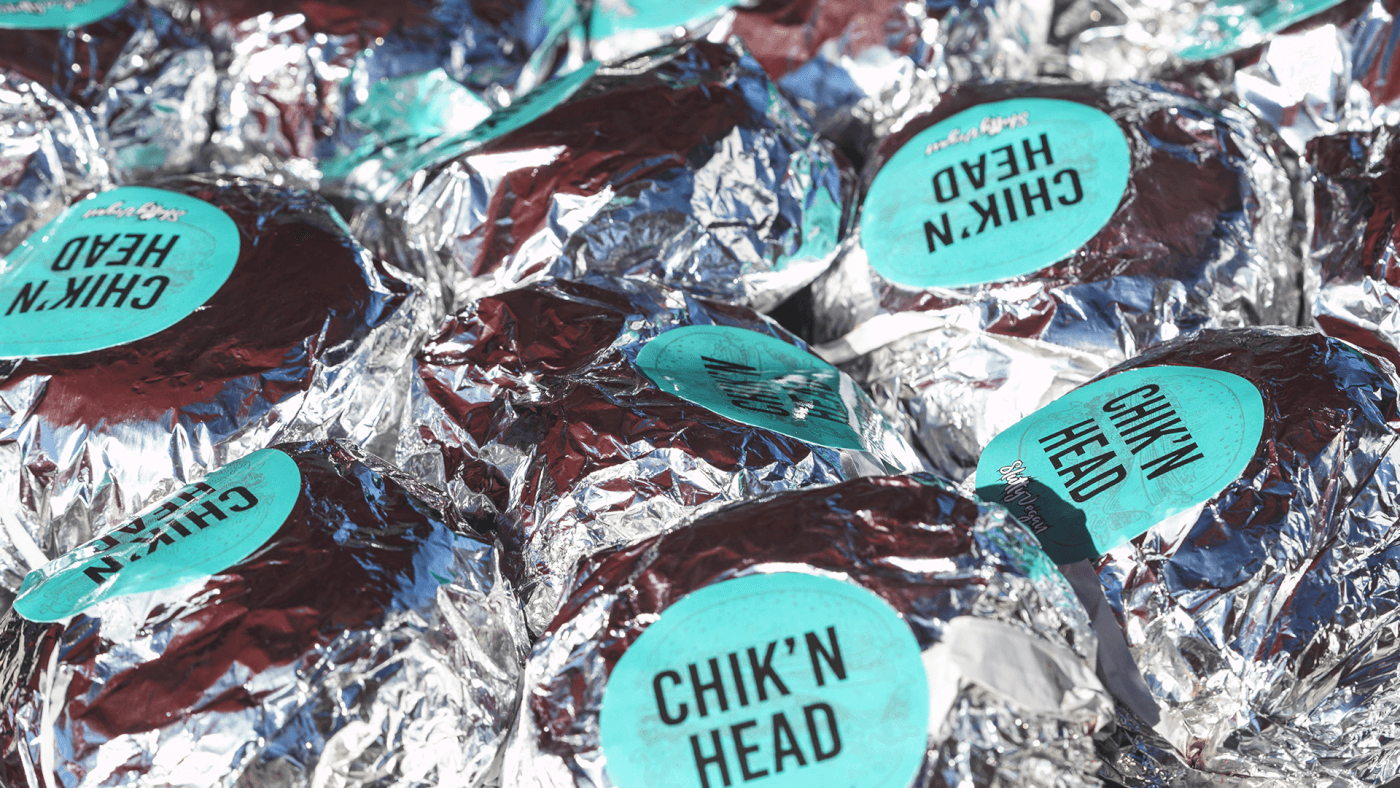 Locals at the event were encouraged to call on their legislators—as Cole and Bryant have— to take action by redirecting meat, egg, and dairy industry subsidies toward incentivizing grocery stores to stock healthy, humane vegan food in food deserts. In Atlanta alone, the U.S. Department of Agriculture has classified more than 35 areas as food deserts, and nearly 2 million Georgia residents, including about 500,000 children, live in food deserts. 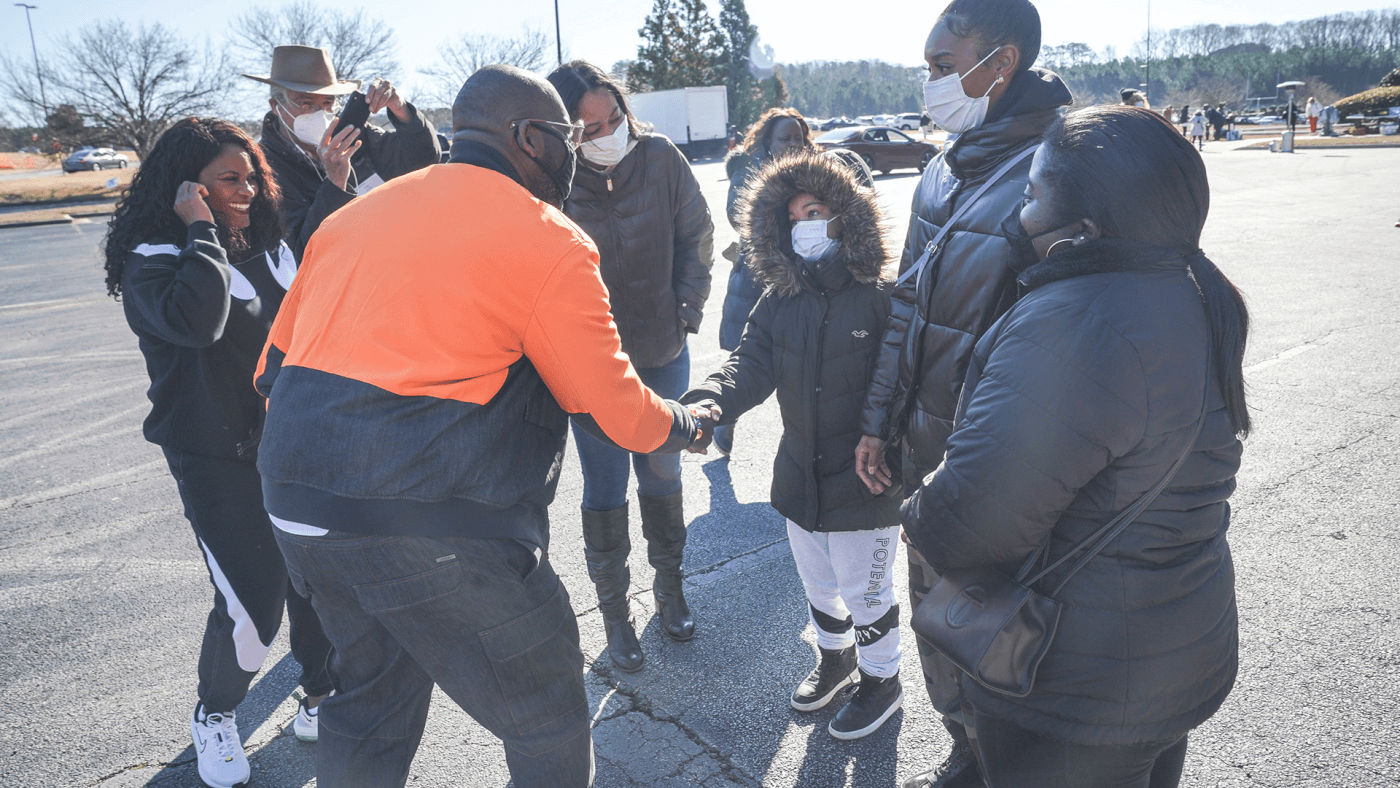 Baltimore: Rev. Turner and The Land of Kush Give Away Free Meals With PETA 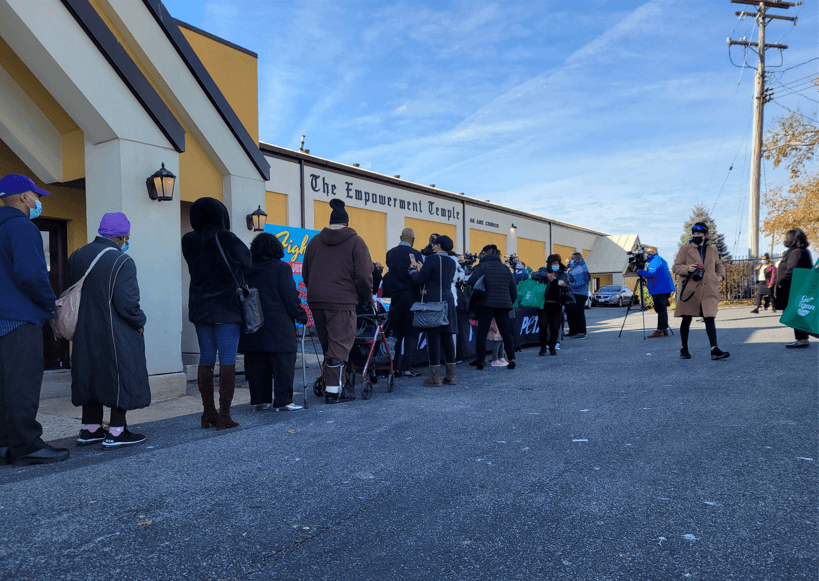 The church is located in a food desert, and one in four Baltimore residents also lives in one. Almost one-third of the city’s residents don’t have access to a car, making it even more crucial that grocery stores in the area be stocked with fresh, healthy foods. Turner has also sent a letter to the Maryland governor make these changes in order to end the food insecurity that disproportionately affects communities of color. 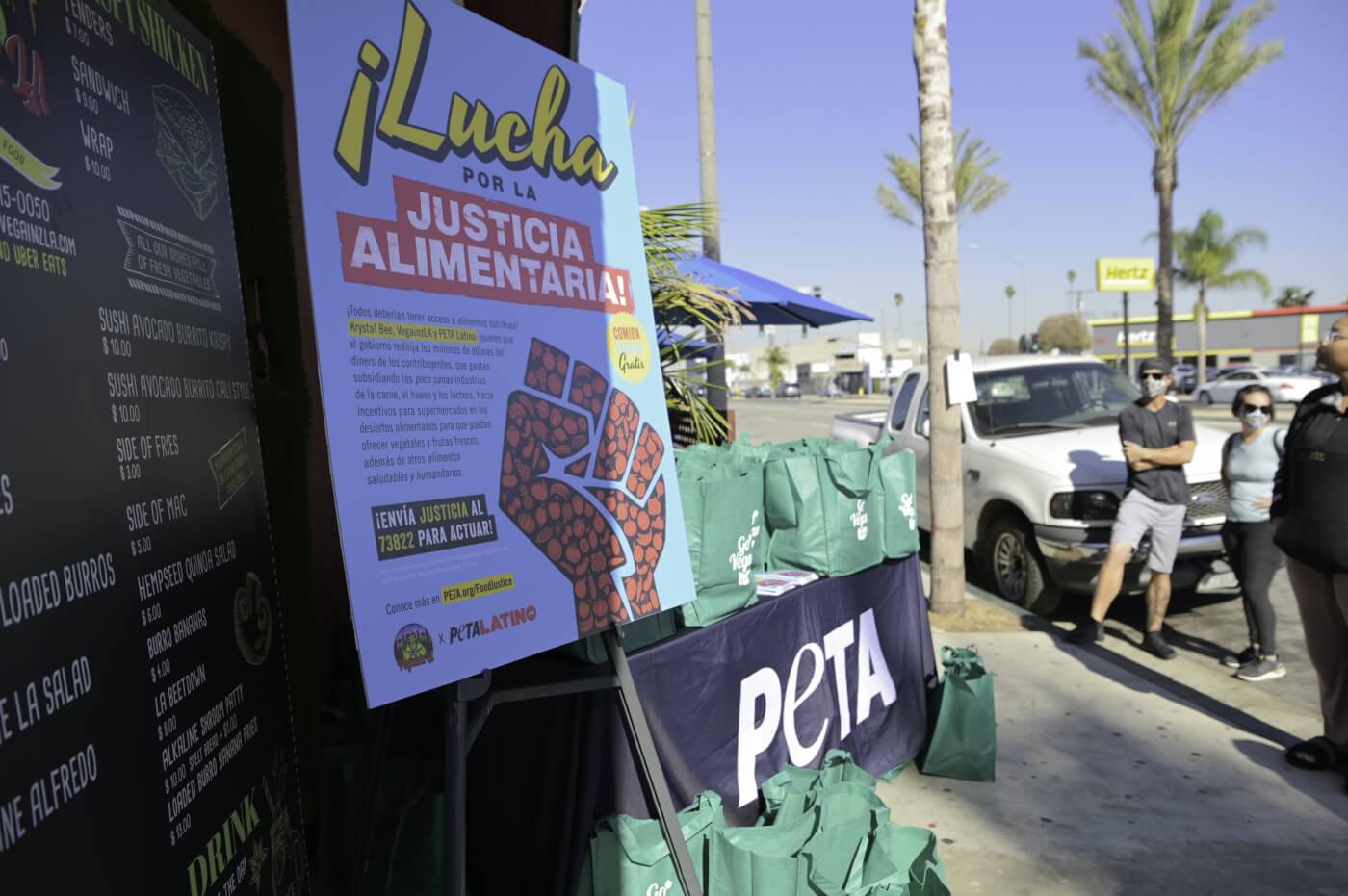 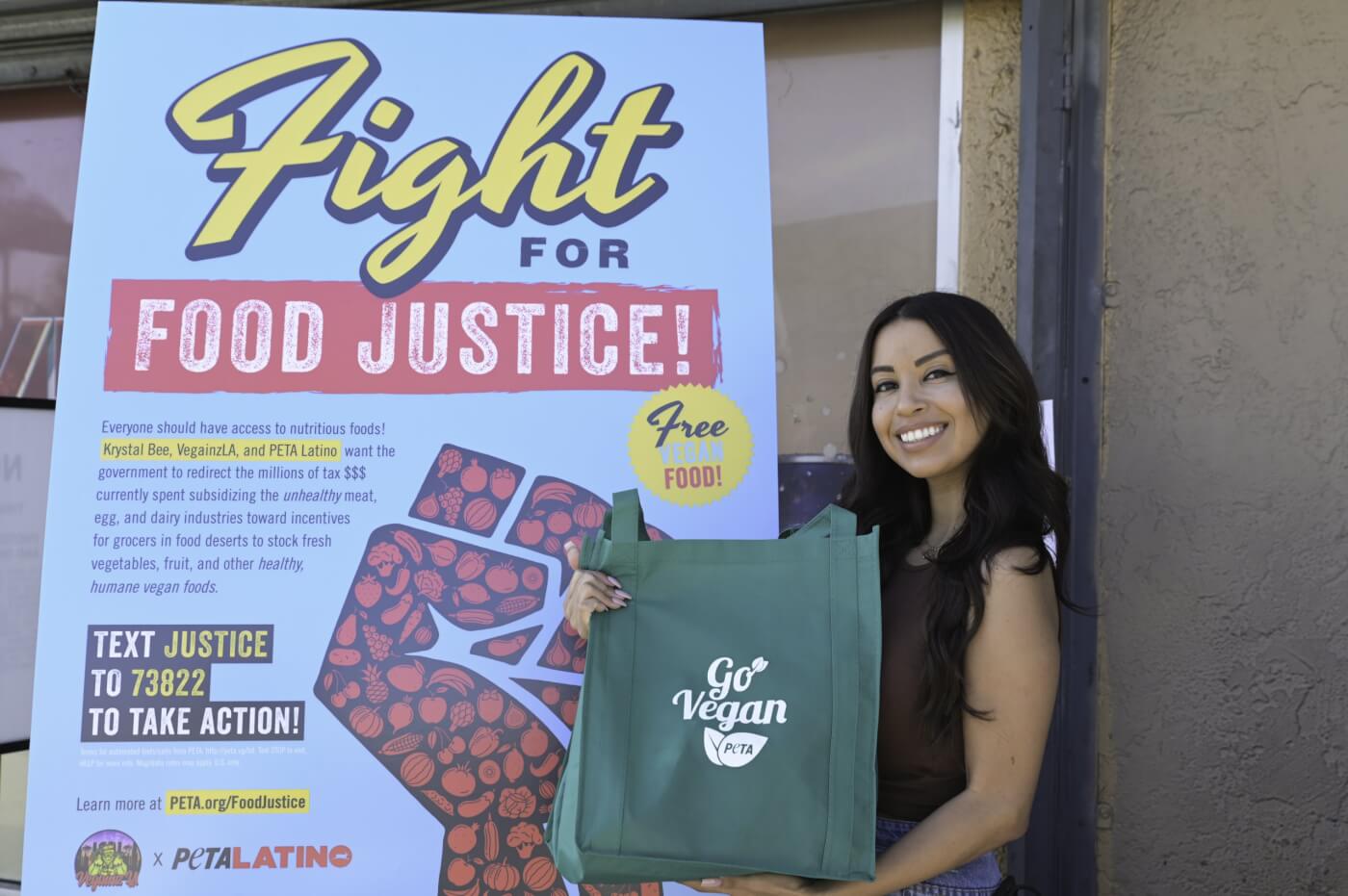 Krystal and the owner of VegainzLA also sent letters to their legislators and California Gov. Gavin Newsom, urging them to redirect subsidies to benefit those who need such help the most. About 8 million people in the state struggle with food insecurity. In Los Angeles alone, nearly 20% of the population lives in a food desert and nearly half live in areas with little access to grocery stores.

“I was born and raised in Inglewood, and the unhealthy food that I grew up eating left me sick and tired. I started VegainzLA with the idea that food is medicine and that our community deserves delicious vegan food that heals us, instead of killing us.”

In California? Text JUSTICE to 73822 to join the campaign, and take action here.

On November 16, PETA and activist Stewart Mitchell (aka “Vigilante Vegan”) passed out free vegan Thanksgiving roasts to passersby at a busy intersection in the Flatbush neighborhood of Brooklyn, New York. 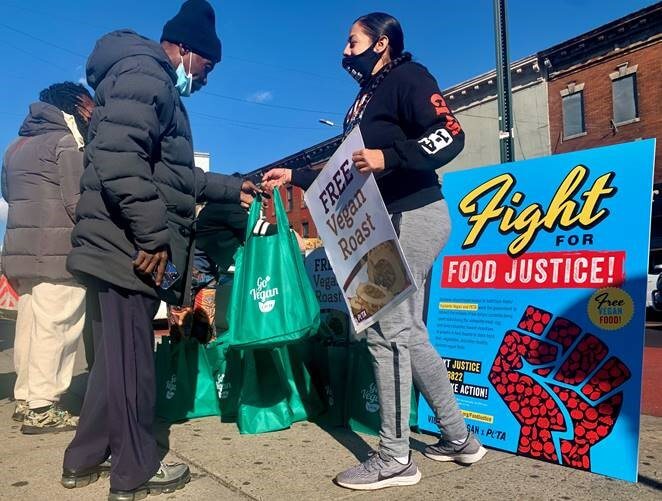 Volunteers handed out recipes and information about redirecting meat, egg, and dairy subsidies to help people in underserved communities. The event introduced many community members to vegan meat, just in time for “ThanksVegan.”

Indianapolis: PETA Fuses With Local Restaurants to Give Out 300 Free Meals 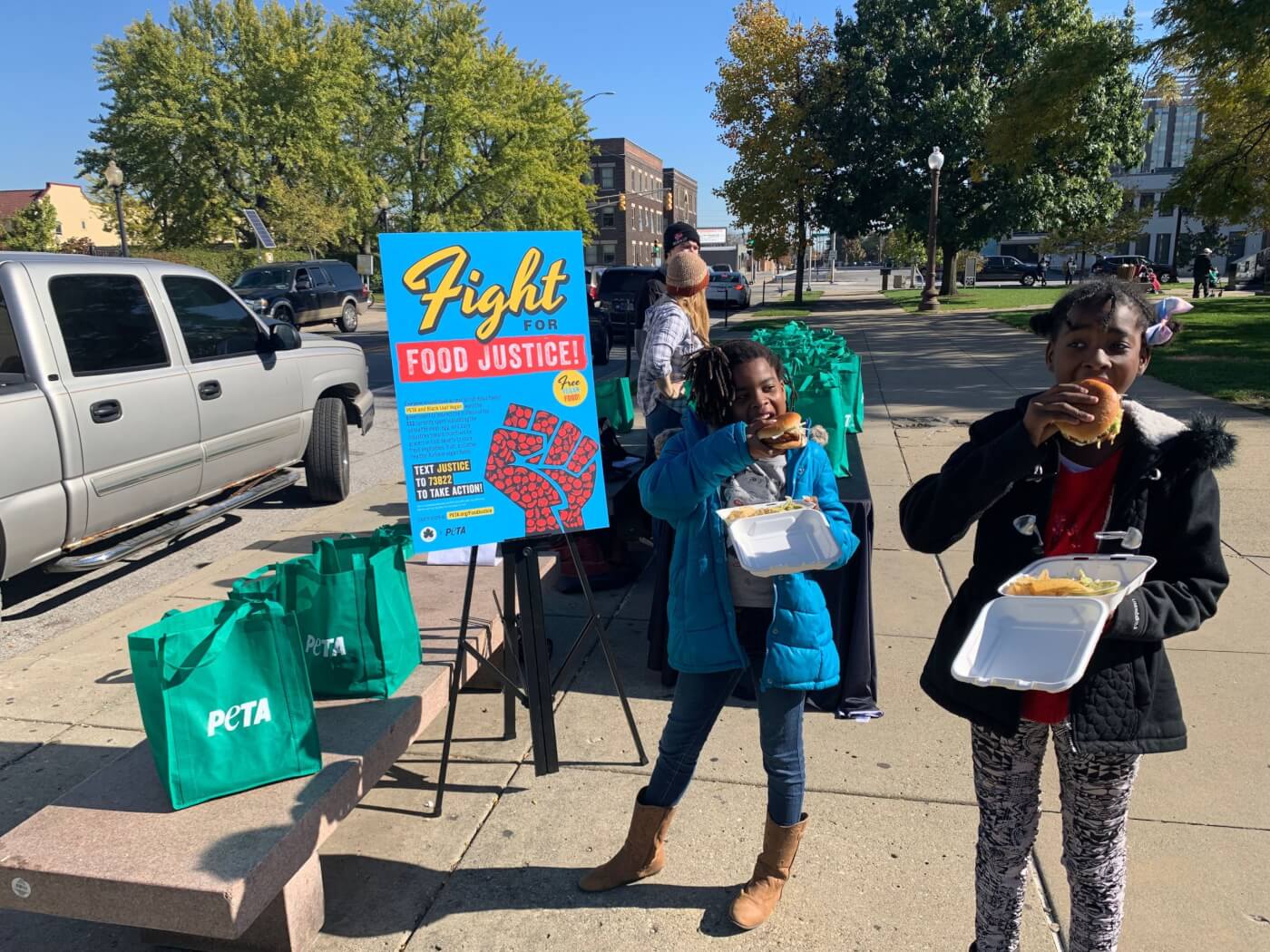 To promote our campaign even more, PETA and Black Leaf handed out postcards for community members to write to their legislators, urging them to redirect meat, egg, and dairy subsidies toward providing their communities with healthy vegan foods. We also handed out copies of our vegan meal starter kit, which includes a reusable green grocery bag, an easy go-vegan guide, a variety of fresh fruits and vegetables, tofu, and more. 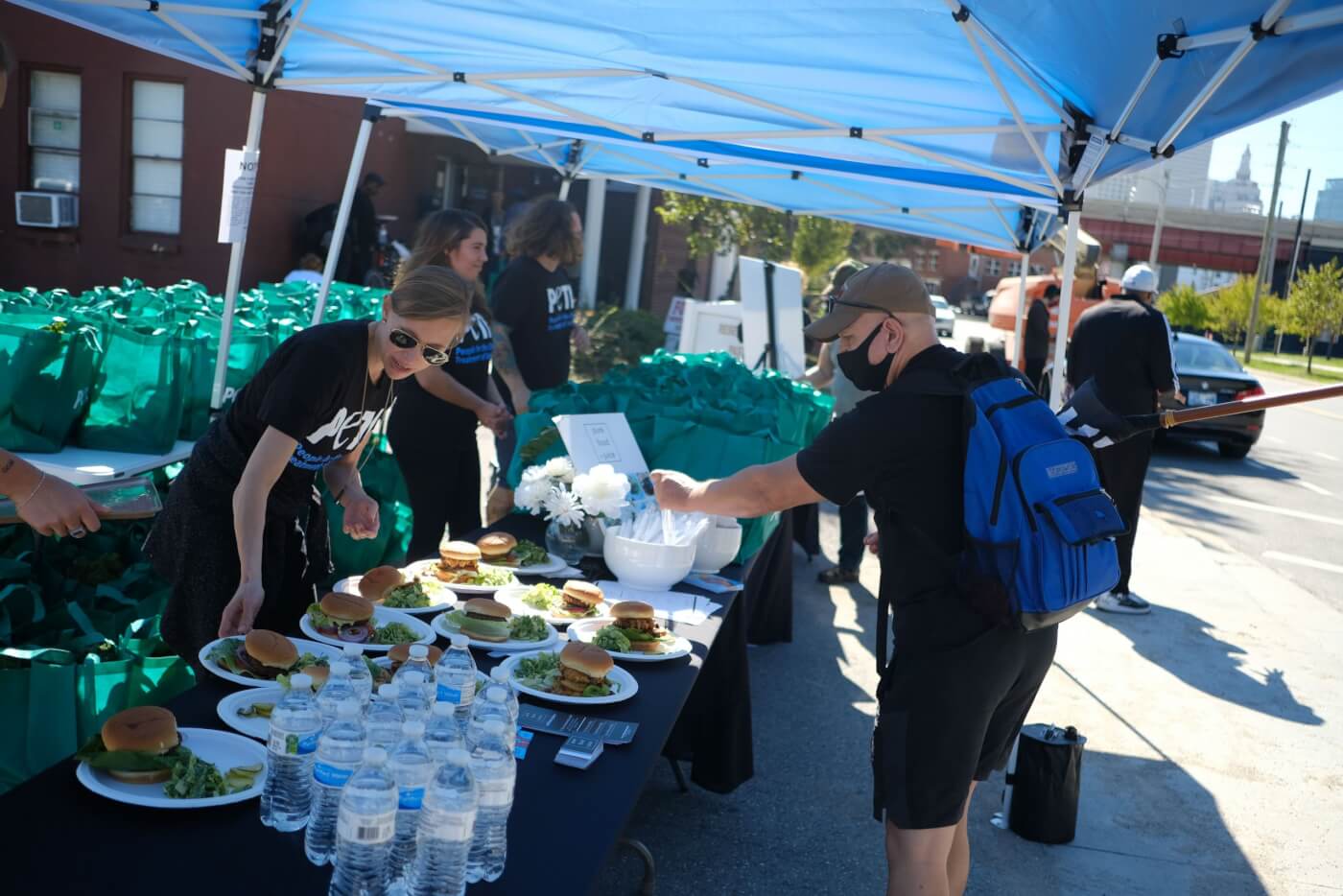 Rev. Turner lent his support as well, igniting the event with a passionate call for Oklahoma legislators to take action against food insecurity that disproportionately affects communities of color:

Black and brown families deserve to have the same access to fresh, healthy plant-based food as anyone else. For decades, the government has been propping up industries that are making people sick and harming God’s creatures. No more. In Tulsa alone, where I’m currently based, nearly 20% of the population lives in a food desert. Not having access to healthy foods forces people to eat processed meats and snacks, which hurts the body, mind, and spirit. Healthy plant-based foods, on the other hand, help prevent heart disease, diabetes, high blood pressure, strokes, and cancer—one of many reasons why I’m committed to eating vegan. 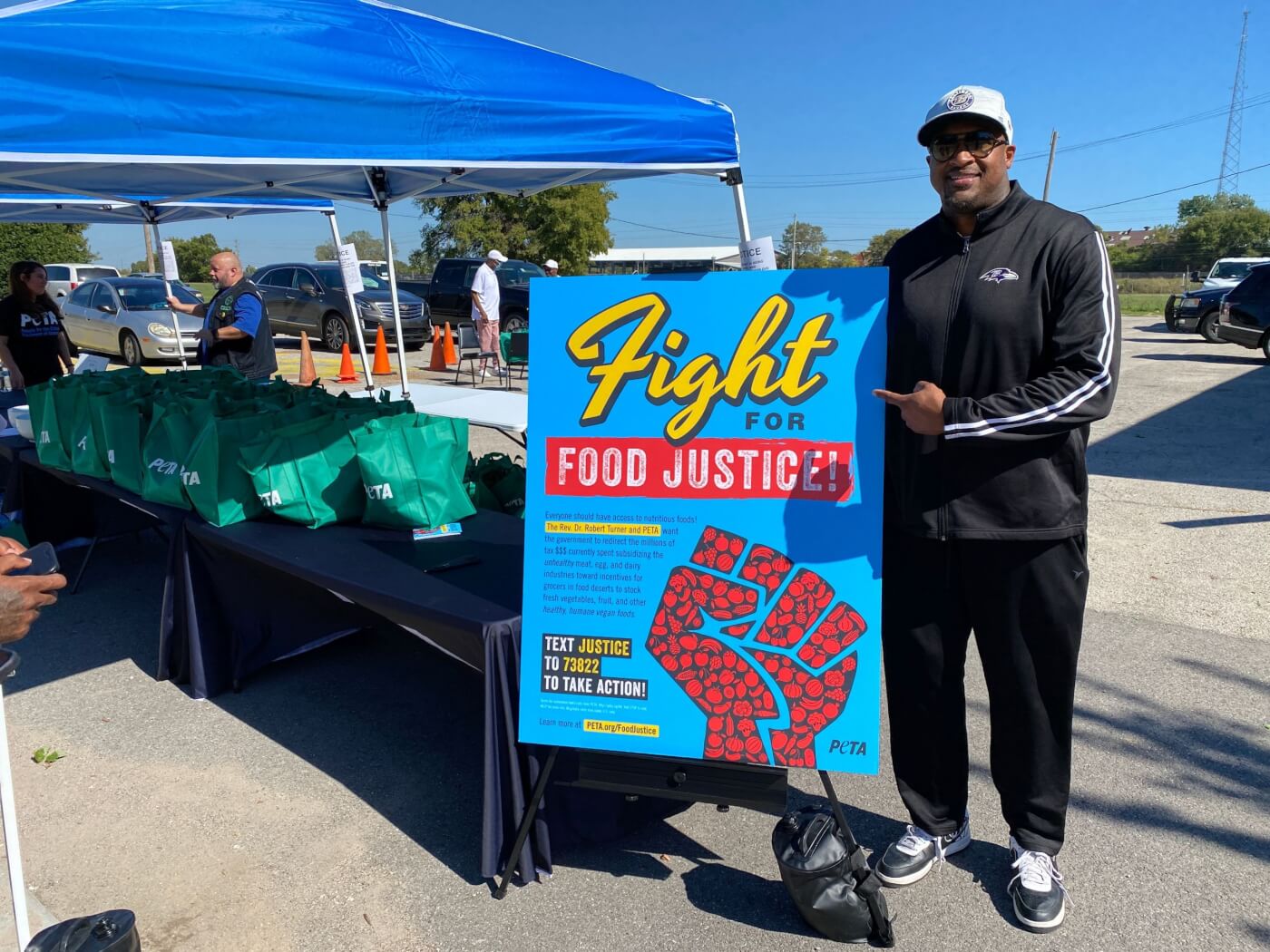 “We’re honored to bring good, kinder food to Atlanta and are grateful for PETA taking up this issue on a national level,” said Cole. Attendees also scooped up PETA’s free vegan meal starter kits to help them go vegan. 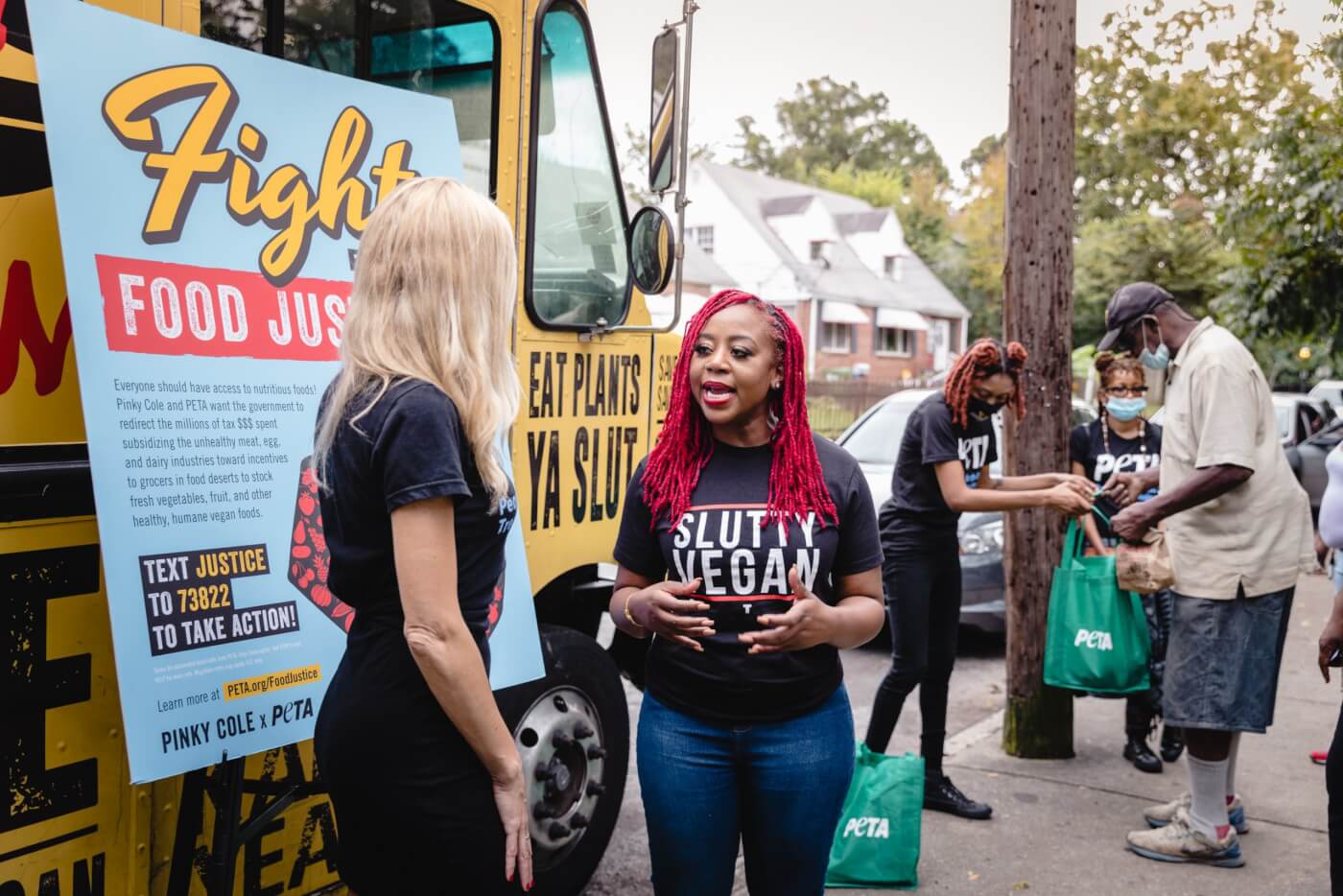 Why Should You Join PETA’s Food Justice Campaign?

Every year, the U.S. government spends about $38 billion in tax money to subsidize the meat, egg, and dairy industries, the vast majority of which goes to big corporations, not American farmers. Only about $17 million is used to subsidize the fruit and vegetable industries—even though the federal government’s own dietary guidelines encourage people to eat more produce and fewer animal-derived products.

In addition, cruel animal agriculture industries exploit and kill sensitive cows, chickens, pigs, fish, and others who don’t want to suffer or be served on a plate. Our fellow animals have families and complex lives, just as we do.

Everyone deserves to have access to nutritious, affordable food. You can support PETA’s initiative for food justice by taking action in your state and signing up to receive campaign updates: