A version of this article first appeared on peta2.com.

SPOILER ALERT: If you haven’t yet watched the Netflix original film Okja, directed by the brilliant Bong Joon-ho, stop reading NOW! This post contains big spoilers and even screenshots from the movie, and we don’t want to ruin your first viewing experience.

If you have seen Okja, welcome! You’re about to feel all the feels you felt when you watched the movie all over again.

Warning: Some of the images below are graphic.

You probably know by now that Okja has done all of the following:

But what you might not know is that the cruelty Okja depicts is super-close to real life. Yes, the film got us all weeping because we imagined our own beloved animal friends in Okja’s position, and we would never want anyone to kidnap, torture, rape, chop up, and eat them. But the images of cruelty and heartache portrayed in the film are a reality for the billions of animals who are killed for food every year.

If you felt for Okja in any of the following situations, remember that there are billions of real animals experiencing these horrors every year. Luckily, you have the power to help them by going vegan.

1. Okja is tossed into truck after truck. In real life, animals killed for meat are transported to slaughterhouses by truck, usually crammed in with hundreds of other animals. Look at the terror in their eyes—do you think they know that they’re about to die? 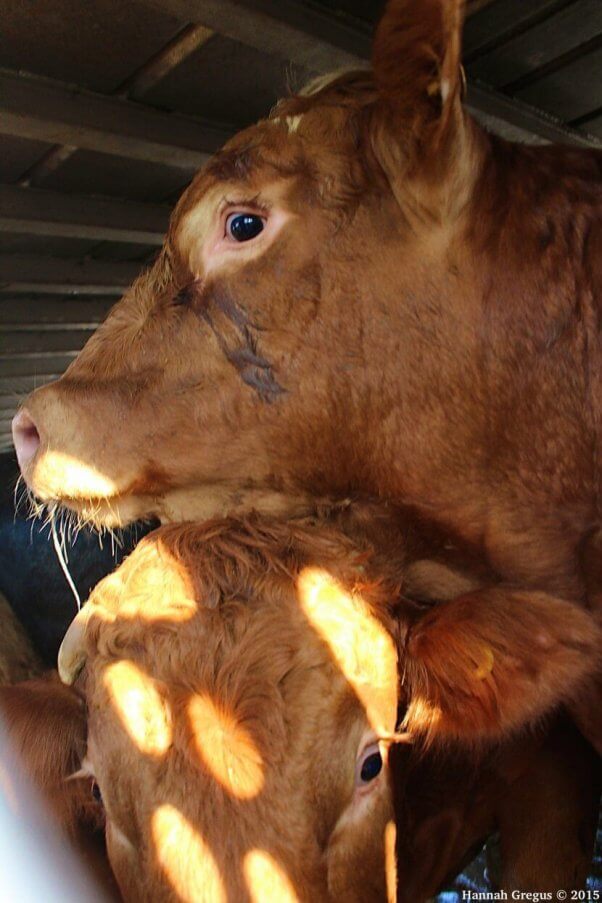 2. Okja escapes from a truck and runs, terrified, through the streets. Trucks transporting real animals to the slaughterhouse often get in big accidentsthat cause them to crash and tip over, leaving the animals injured, scared, and sometimes dead. 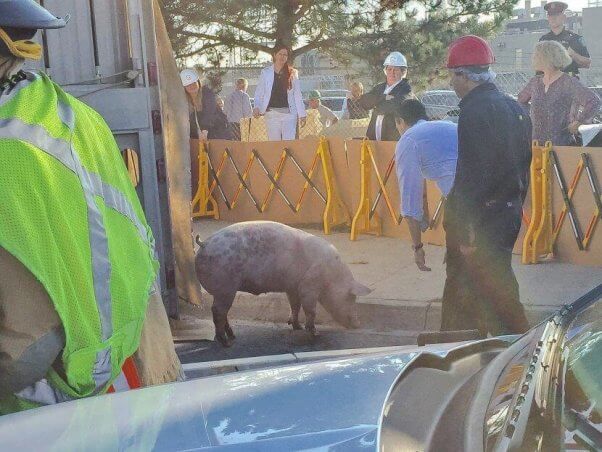 3. Okja is brought to a crowded lot that looks nearly identical to those in which animals are confined in real life. There, animals live in cramped conditions, sometimes among their own waste, just waiting for their turn to be slaughtered. 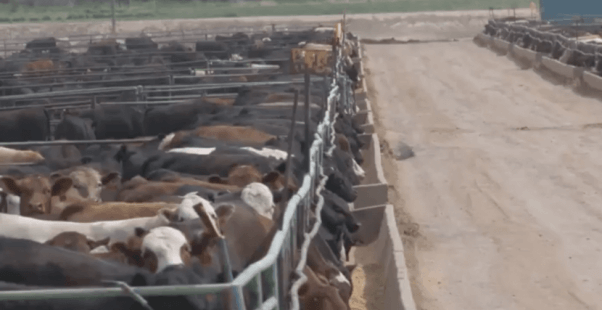 4. In Okja, we see a man herding dozens of “super-pigs” up a ramp into the slaughterhouse with an electric prod. This is a common practice in a number of industries that exploit animals. Here, we see scared sheep being prodded this way, likely being forced into spaces where they’ll be abused for their wool or slaughtered for their flesh. 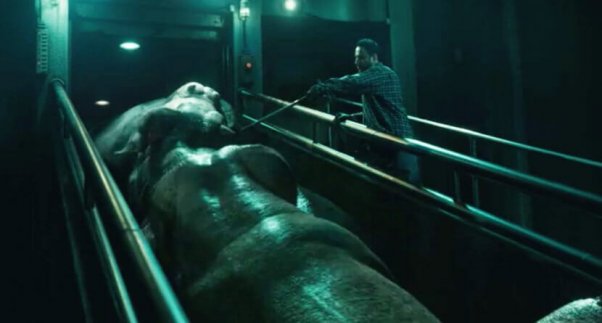 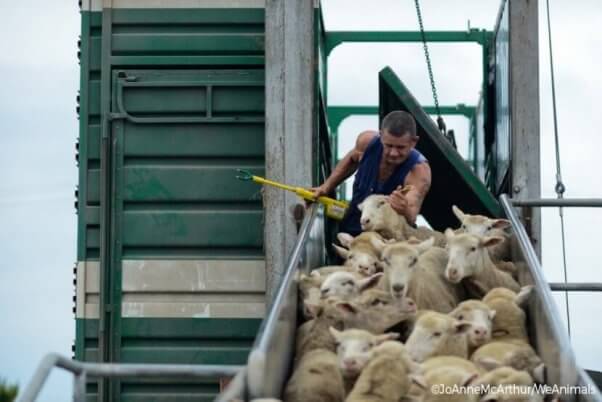 5. The big, scary machine that they put Okja in after herding her up the ramp into the slaughterhouse is called a pneumatic reverse box. This is an actual machine used to kill real cows. 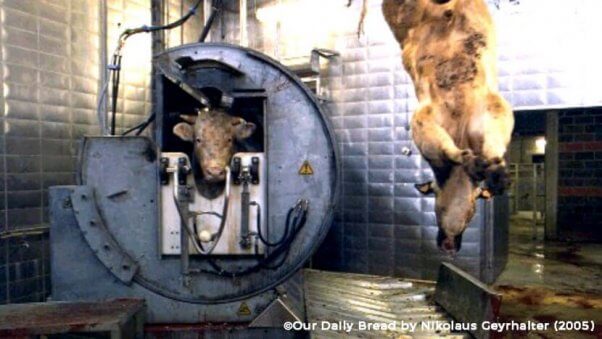 6. While inside the pneumatic reverse box (aka “the about-to-get-murdered box”), the “super-pigs” are stunned in the head with a captive-bolt gun before falling to the floor. Right before they’re slaughtered, cows and pigs are normally stunned in the head in an attempt to render them unconscious before their throats are slit. Sadly, this stunning process doesn’t always work, meaning that animals are frequently fully conscious when slaughterhouse workers cut their throats. 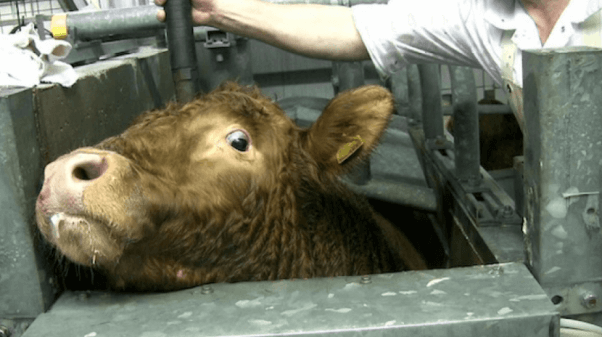 7. Just like those of the “super-pigs” in the movie, the dead bodies of real cows are hung from the ceiling of slaughterhouses to drain their blood. 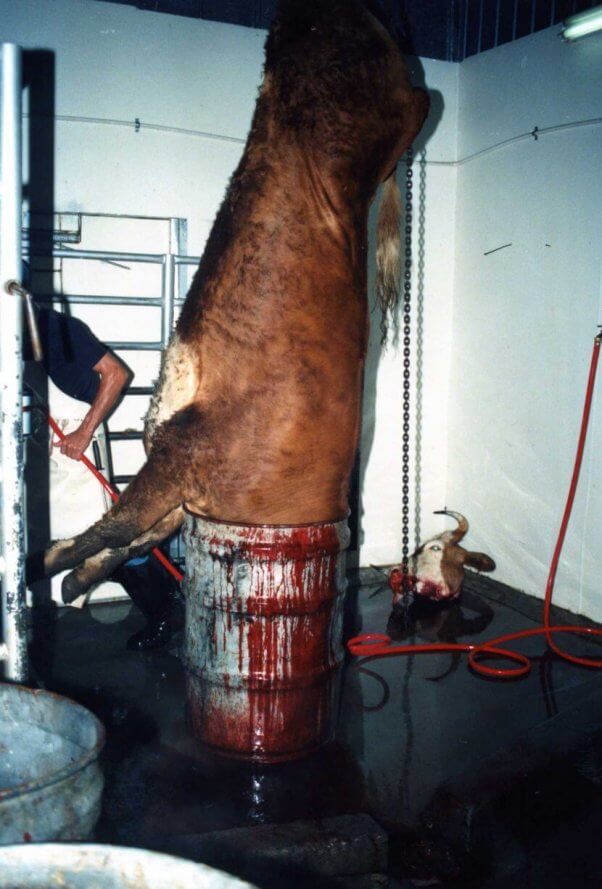 8. Mija looks up in horror at the slabs of “super-pig” body parts that hang from the ceiling in the slaughterhouse. These images from a real slaughterhouse are even more shocking. 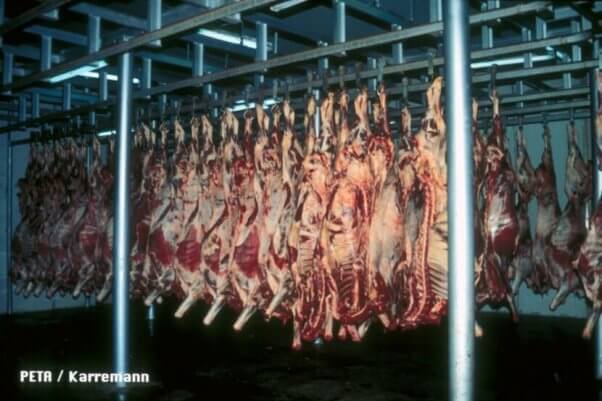 9. Workers in the movie use a saw to rip open the carcasses of the fictional “super-pigs,” and the same thing is done to real-life cows, right along the spine. 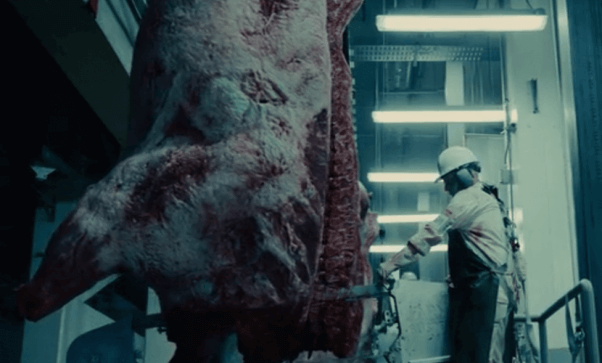 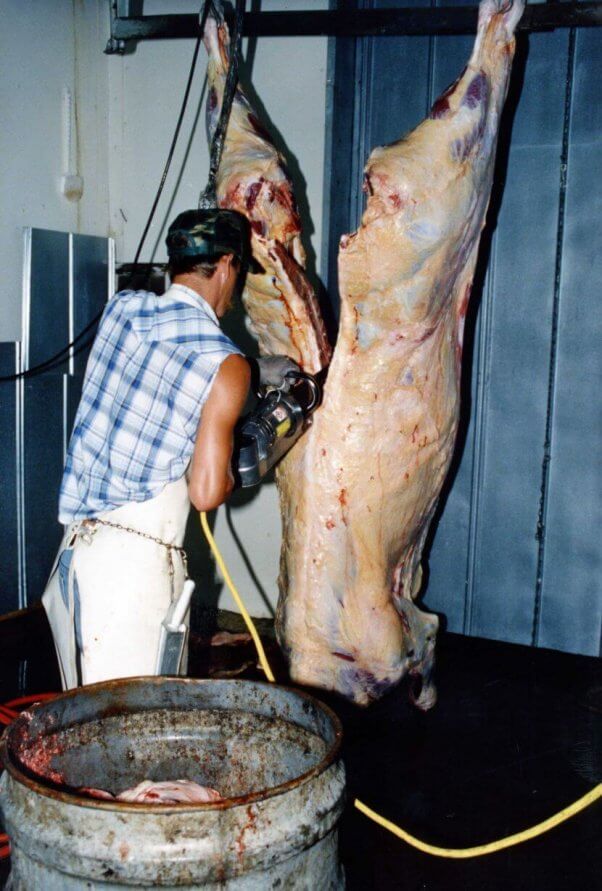 10. A worker sweeps gallons of blood into a drain in Okja. Real slaughterhouses are inevitably painted with blood—a grim reminder of the animals who suffered and died there. 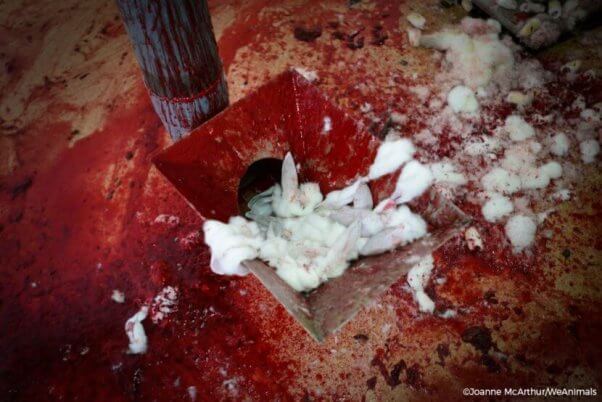 11. In both Okja and real life, workers dismember the body parts of animals and chop them up into slabs of meat to be labeled as “food” and sold in grocery stores. 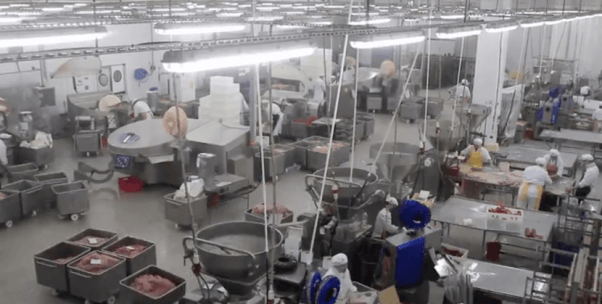 12. It’s not just adult animals who suffer for meat. Babies in the meat industry aren’t as lucky as the little “super-pig” who was rescued in Okja. Piglets are taken away from their mothers after just a few weeks. Their tails are chopped off and their teeth clipped, and the testicles of males are ripped out—all without painkillers. 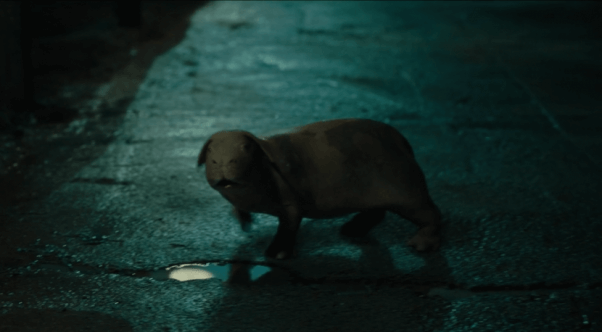 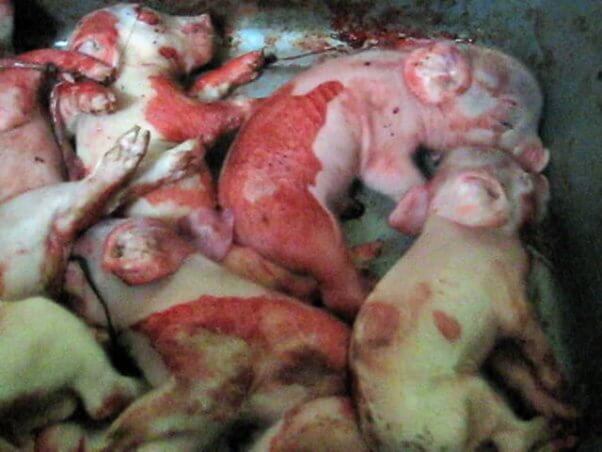 Also as in Okja, in real life, mother animals in the meat and dairy industries have been known to do everything that they can to try to prevent their young from being killed. A mama cow reportedly hid her baby in the bushes so that the farmer couldn’t find and slaughter her.

If Okja made you feel any emotions at all, please go vegan. You can help the real-life “Okjas” (cows, pigs, chickens, sheep, turkeys, and other animals) by choosing not to eat or wear anything made from animals.