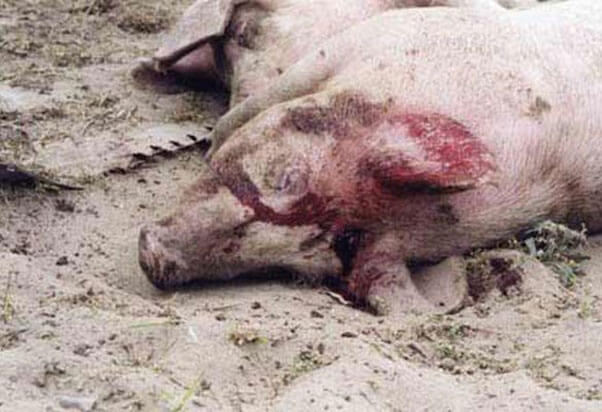 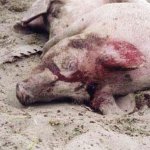 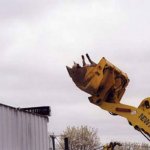 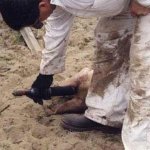 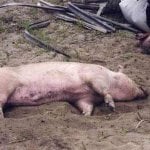 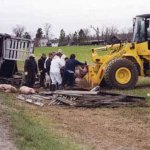 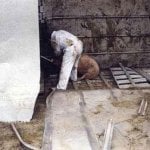 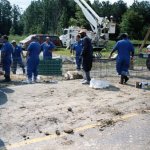 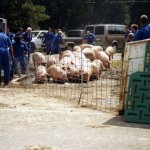 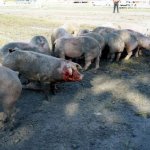 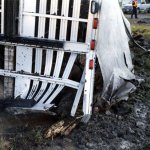 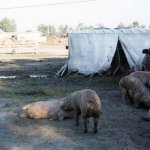 Pigs raised and killed by Smithfield and other companies suffer horribly, not just on factory farms and in slaughterhouses but also when they are transported to slaughter. To get the terrified pigs onto transport trucks bound for the slaughterhouse, workers often beat them on their sensitive noses and backs or stick electric prods in their rectums.

Crammed into 18-wheelers, pigs struggle to get air and are usually given no food or water for the entire journey (which sometimes lasts hundreds of miles). A former pig transporter told PETA that pigs are “packed in so tight, their guts actually pop out their butts—a little softball of guts actually comes out.” Pigs suffer from temperature extremes and are forced to inhale ammonia fumes and diesel exhaust.

There were at least six accidents in southeastern Virginia from March 2004 through 2008 involving trucks that were transporting pigs. Such accidents are common in the factory-farming industry, where transport is largely unregulated and federal laws protecting animals on their way to the slaughterhouse are non-existent.

You can help stop this cruelty by going vegetarian. By adopting a vegetarian diet, not only will you save nearly 200 animals each year, you might also save your own life, because vegetarians tend to be healthier than meat-eaters. Order our free “Vegetarian Starter Kit” today. And be sure to check out our favorite mock-pork products, all of which are delicious and cruelty- and cholesterol-free!

On a sunny day, a transport truck carrying nearly 200 live pigs to a slaughterhouse overturned on a straight road in Suffolk, Virginia. Approximately 65 pigs were killed by the impact, died from their injuries, or were killed at the site of the accident by responding workers, including employees of Murphy-Brown, a subsidiary of Smithfield Foods, Inc. Other pigs were trapped in the wreckage for hours.

As if the trauma of the accident weren’t enough, while workers were removing the surviving pigs from the scene in order to send them on to the horrors of the slaughterhouse, they yanked the terrified pigs by their ears and slapped and hit them in the face with tools that even the pork industry says should never be used to hit animals.

Almost 200 pigs became trapped on top of each other, many suffocating and screaming, for more than three and a half hours in the hot sun after a transport truck ran off the road and tipped over on its side in Suffolk, Virginia. The truck had reportedly broken down en route to a slaughterhouse, and because it arrived after the kill floor had closed for the day, the driver was told to turn around.

Firefighters used the “jaws of life” to pry open the top of the truck, and workers pulled, pushed, kicked, and prodded the terrified pigs down a slippery ramp and into a holding pen. One pig, unable to move, sat on the ramp for more than 11 minutes and was trampled by her peers as they struggled to get off the truck. Workers tried to push her down the ramp, lift her up by her back legs, and kick her to make her move, but she couldn’t stand.

PETA staff members—alerted to the crash by concerned passersby—pleaded with officials for hours, but to no avail, in an attempt to ensure that injured animals were examined and put out of their misery. After the truck was righted—with many of the panicked and injured pigs still in it—the pigs on the truck’s bottom level were taken to a nearby factory farm. None was seen being examined by a company official or a veterinarian, and their screams continued as the truck carted them away. Five hours after the crash, those left in the makeshift pen were slapped and kicked to get them onto another truck and were taken away.

After a transport truck tipped over on a straight road in Isle of Wight County, Virginia, pigs were forcibly thrown from the truck, killing many on impact. Smithfield workers killed some of the injured pigs with a captive-bolt gun, a tool that propels a metal shaft into animals’ brains. Captive-bolt guns often do not work well, causing immense suffering for animals who are shot incorrectly.

Other pigs lay in the field for hours, unable to move, while Smithfield workers loaded 111 survivors onto two transport trucks. Smithfield representatives left the 49 pigs who were loaded onto the second truck to sit in the hot sun for about 45 minutes, shielding the public’s eyes from what was going on behind the truck: Workers used a front-end loader to shovel the bodies of 74 pigs (including some who were not confirmed dead) into a dump truck.

PETA field officers at the scene of the accident pleaded for permission to pay a large-animal veterinarian to euthanize the animals, which would have spared them hours of pain and agony, but a Smithfield official refused even to address our request. The Virginia state veterinarian’s office, contacted by PETA, also refused to come to the scene to help oversee or properly euthanize the suffering pigs.

A transport truck carrying approximately 200 pigs to a Smithfield Foods slaughterhouse crashed in Suffolk, Virginia. Seventeen pigs were on the ground outside the vehicle. Many of these animals were bleeding from their noses or backsides, and six of the animals couldn’t stand or walk. The animals trapped in the truck squealed loudly and could be heard more than 100 yards away. The roof of the overturned truck bulged repeatedly as the pigs kicked and struggled inside. A PETA staff member saw bleeding pigs inside the truck who struggled to move on top of their motionless peers.

After injured pigs languished in the truck for almost four hours, employees from Smithfield’s supplier removed part of the rear door of the truck and began to push the live pigs onto a ramp that led to the bottom of another transport truck. One pig collapsed at the feet of the employees. She tried to prop herself up but couldn’t stand, repeatedly falling on her side. The employees pushed more than 20 other pigs over and past the downed animal, trampling her in the process. She lay on the ground, motionless and suffering, for 36 minutes.

A local veterinarian called to the scene by a responsible law enforcement official was able to euthanize 10 of the animals. PETA estimates that more than 60 animals died in the crash. The remaining pigs, many with injuries, were taken to be killed at the slaughterhouse.

After a Smithfield Foods transport truck loaded with 180 pigs overturned on Virginia Route 10 in Smithfield, Virginia, most of the pigs were forcibly thrown from the truck into a nearby field, and some were killed on impact. Many of the survivors were severely injured. Some suffered broken legs or ribs, and all were confused and terrified. The injured pigs lay in the field for hours, most unable to move, while Smithfield workers attempted to corral other pigs.

Finally, after more than two hours of chasing down the other animals, the Smithfield employees went to work killing the injured pigs with a captive-bolt gun. Many animals had to be shot several times before they finally died, causing them to scream out each time that they were unsuccessfully shot. After all the animals were killed, the workers used a front-end loader to shovel the piles of dead bodies into the back of another truck.

Smithfield refused to allow PETA field officers to painlessly euthanize the animals. The Virginia state veterinarian, contacted by PETA, also refused to come to the scene to help.