This week, the new Netflix movie Okja was released. It’s an action-adventure film that shows the horrors of animal agriculture through the eyes of a young girl and her “super pig.” Filmmaker Bong Joon Ho should take pride in the fact that what he made is effective, because it already has numerous people pledging to go vegan after connecting with the story. If you’re ready to watch the film, here are some things that you can expect to happen:

1. She can’t even stand the sight of meat now.

Okja is such a beautiful movie that’s is I can’t look at meat anymore im jumping on that #vegan wave pic.twitter.com/rYJ40xr4Fr

2. She realized that the “Vegan Agenda” conspiracy is real and becoming mainstream.

me before okja: i luv meat i could literally never be a vegan yikes lol!!me after okja:pic.twitter.com/F0CkLbr6oU

4. He entered his midlife crisis with a healthy change.

Just finished watching Okja and I’m sobbing 🙁 I’ve wanted to become vegan or at least vegetarian and I really want to commit to it.

6. He decided it was time to stop planning and start doing.

7. If you were already vegan, you went MORE vegan.

Me being extra vegan after watching #Okja pic.twitter.com/tKH80bnJyC

8. … or decided to help mentor others.

9. Everyone had the same thought at the same time. 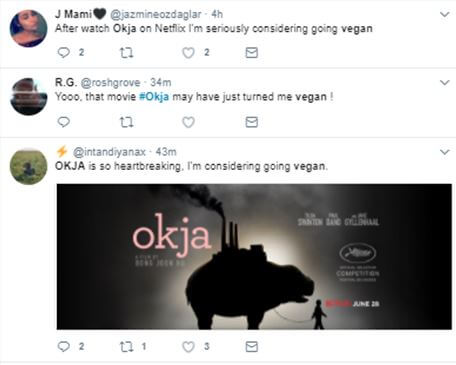 10. The future started to look brighter.

Maybe not everyone’s gonna go vegan, but hopefully #Okja can make a lot of people realize how cruel it is to eat animals.

Just finished watching Okja and I want to be vegan now

Learn more about animals used in film and television on The PETA Podcast:

In the U.S., 110 million sensitive, affectionate animals—just like Okja—are killed for food every year. When you start to relate to who’s on your plate, you can make a difference by switching to a vegan lifestyle. Order our vegan starter kit to help get you started, and then sign our Vegan Pledge!