Update: Just days after Oakland passed a law to prohibit bullhooks, Austin’s City Council voted unanimously to have its legal counsel draft a bullhook ban. The ordinance is expected to be ready and voted on in the spring. Austin is poised to join other progressive cities, including Los Angeles and Miami Beach, Florida, in saying no to bullhooks. The day is quickly coming when circuses such as Ringling Bros. will no longer be able to hit and hurt elephants with these barbaric weapons.

The Oakland, California, City Council has voted to ban bullhooks! An emergency appeal from Emmy Award winner and elephant advocate Lily Tomlin, along with the support from hip-hop mogul Russell Simmons, former Oakland Raiders player David Carter, and AFI lead singer Davey Havok, helped to make it happen. It was a nail-biter that came down to the 11th hour, but PETA’s relentless push and Tomlin’s letter to City Council President Rebecca Kaplan urging her to condemn this cruel weapon resulted in a five to two winning vote.

“From one compassionate person to another, I urge you to see through the smoke screens and realize that at the heart of the issue is morality and compassion for another species,” wrote Tomlin. 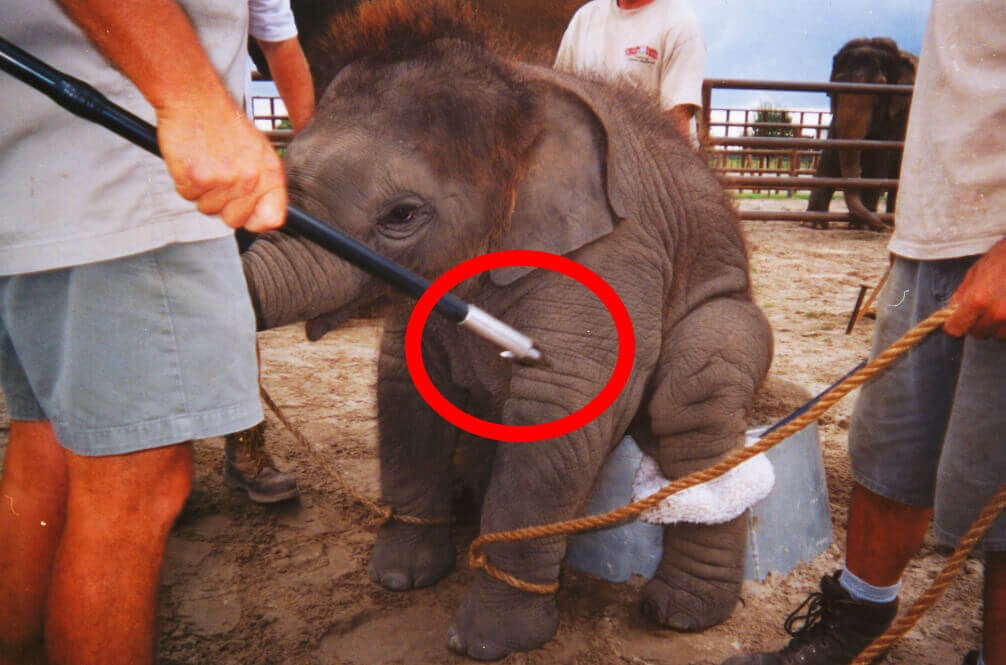 Bullhooks—heavy batons with a sharp metal hook on one end—are used to beat and jab elephants. Make no mistake about it: Bullhooks are weapons.

Ringling Bros. and Barnum & Bailey Circus, which has performed annually in Oakland, unashamedly defends the use of these devices. Trainers sink the sharp hooks deep into elephants’ ears, mouths, and other sensitive parts where their skin is paper-thin and swing the batons like baseball bats. Elephants quickly learn to obey like automatons or suffer the painful consequences.

The following statements were made by City Council members with regard to the ban:

“This is the right thing to do. It’s just that simple.”
—Council Member and Mayor-Elect Libby Schaaf

“I don’t need to have an elephant stand on one leg to see how cute he looks….I don’t learn about the elephants over at the circus while I’m sitting there entertained…. That’s a show.”
—Council Member Noel Gallo

“I’m convinced beyond any doubt in my mind that [the bullhook] is used often enough that we are right to ban it.”
—Council Member Dan Kalb

“I’m convinced we’re going to move to a time when there won’t be any elephants in circuses.”
—Mayor Jean Quan

PETA is sending a box of elephant-shaped vegan chocolates to Oakland City Council members to thank them for joining other cities across the country—including Los Angeles, which Tomlin also championed—in banning bullhooks.

Contact us for materials for launching a campaign to get bullhooks banned in your area.