Immoral activity infects every stage of the filthy meat industry, from raising animals to transporting them to killing them. But can you guess which infamous company tops the list of despicable meat companies? 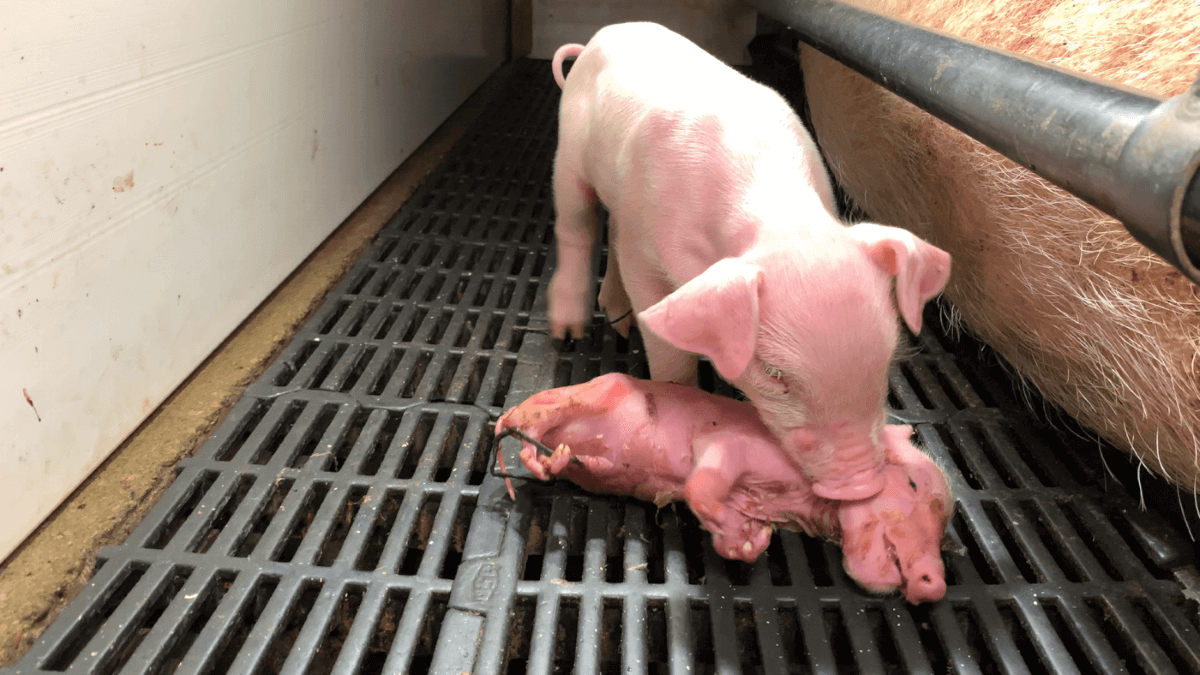 A new report found that JBS, the world’s largest meat producer, operates seven of the 10 worst large livestock slaughter plants in the U.S. In just three years, these notorious slaughterhouses racked up 132 violations, including 18 that authorities classified as “egregious.”

And those just include the times JBS got caught.

It all starts on the farms where sensitive individuals are raised for slaughter.

Pigs with bloody sores, mother pigs so badly injured that they could barely move, and dying piglets left to rot alongside their surviving siblings—a PETA exposé revealed all this and more at Indiana’s East Fork Farms. The farm supplied JBS USA, the nation’s second-largest pig slaughterer.

When given the chance, mother pigs “sing” to their young and cuddle them. But as on most pig farms, the mothers at East Fork were practically immobilized in crates barely larger than their bodies—some of them even narrower than those typically found on factory farms. Workers crudely cut off piglets’ tails without giving them any pain relief and then threw the frightened babies several feet through the air to another worker. Trampled piglets were left to writhe on the floor.

The manure pit under the flooring brimmed with feces and urine. Rats, roaches, maggots, and other insects had free run of the dilapidated sheds, which were littered with decomposing bodies, amputated tails, and decapitated heads of piglets. 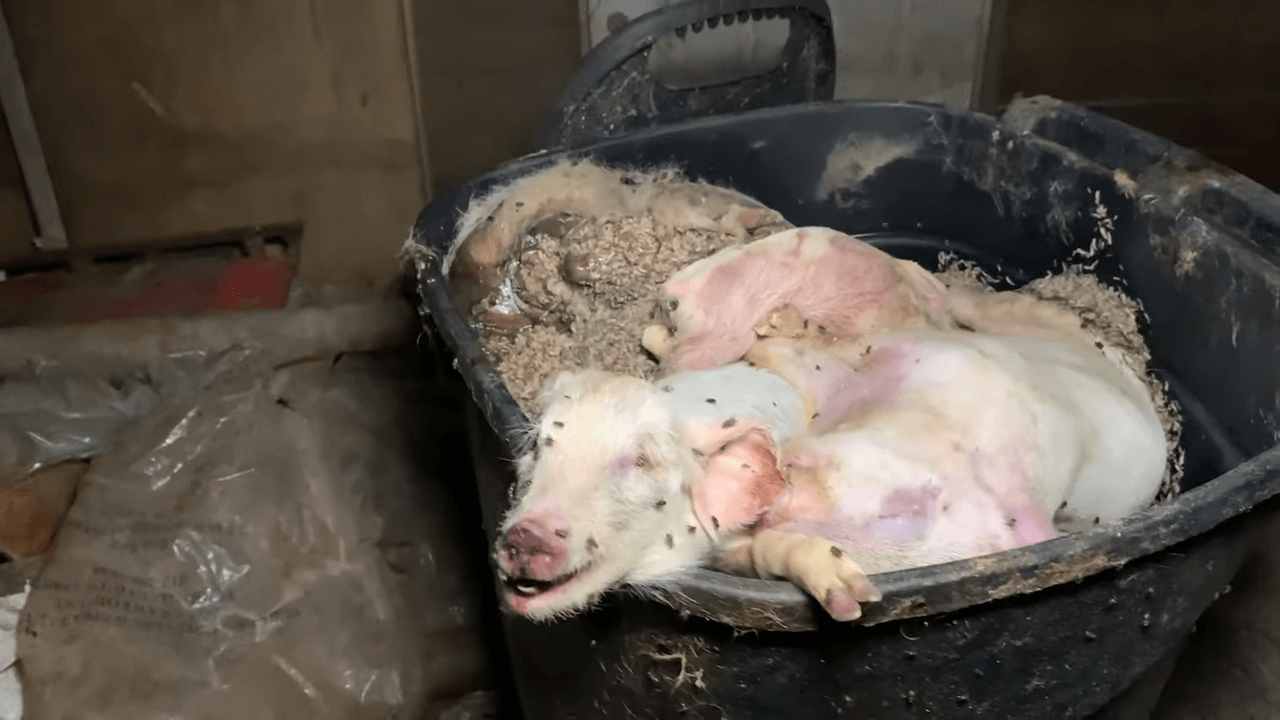 An anonymous whistleblower found a trashcan overflowing with dead piglets and maggots.

Animals who survive the farm frequently die in transport.

Here’s just one example of the way JBS pushes the legal limits when transporting animals to slaughter: A whistleblower reported that the company forces cattle transported from as far away as Montana to languish in idling trucks in all weather extremes outside its Grand Island, Nebraska, plant for up to 10 hours before being unloaded, causing extra suffering and even leading to deaths. 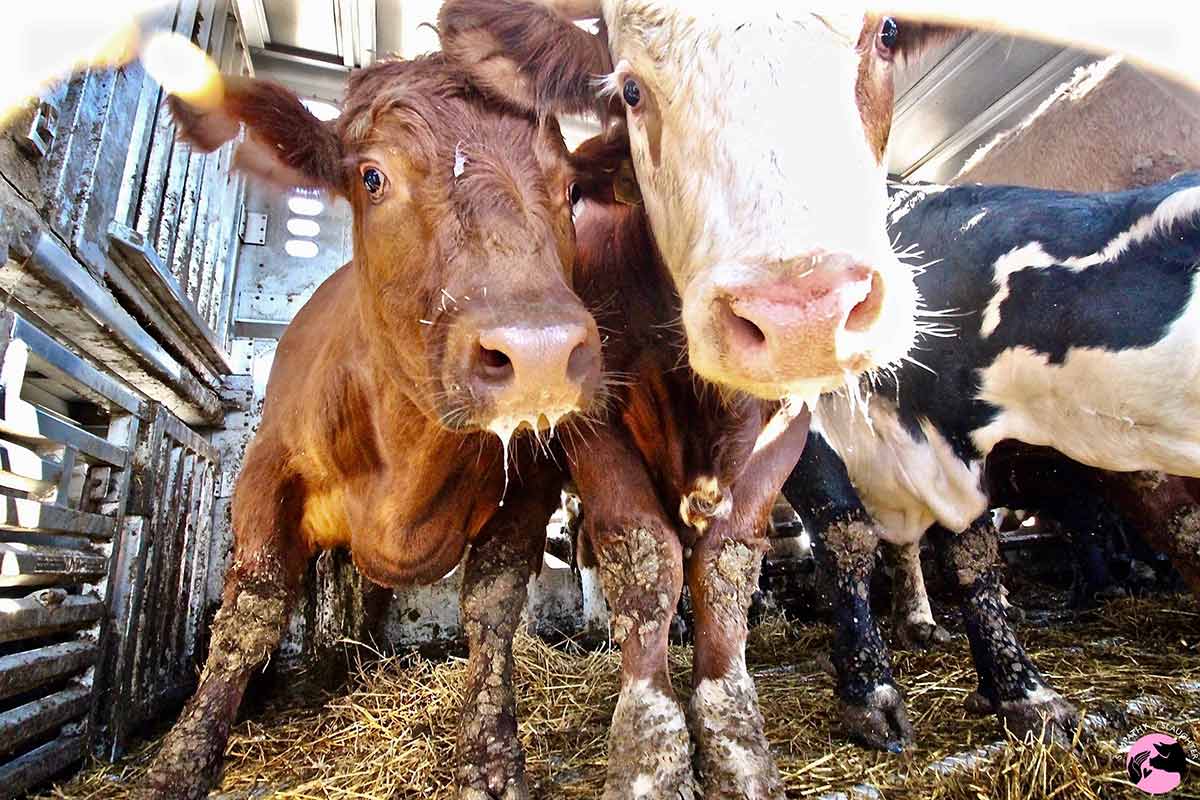 According to disturbing firsthand accounts, JBS intentionally overbooks cow deliveries to maintain a high “kill ratio,” increasing its bottom line at the expense of animals.

At JBS slaughterhouses, respecting the will to live means absolutely nothing.

PETA obtained U.S. Department of Agriculture reports revealing that workers at the same JBS-owned facility in Grand Island, Nebraska, repeatedly shot conscious cows in the head with a captive-bolt gun, causing them to struggle, bleed from the nose, and cry out.

In one incident, workers apparently didn’t even bother to stun a cow before shackling her and hoisting her onto the bleed rail while she was still fully conscious.

A concerned whistleblower contacted PETA claiming that the placement of captive-bolt guns on cows’ heads at this same JBS facility was “almost always abnormal.” The eyewitness provided photographs and video footage depicting improper positioning and a conscious cow whose throat had been slit while she was hanging on the rail.

Cows have best friends and hold grudges against humans who treat them cruelly. These gentle giants mourn the deaths of loved ones, sometimes shedding tears over their loss. Imagine the anguish they must feel at a slaughterhouse.

After releasing this evidence of apparent criminal behavior, PETA urged the U.S. attorney for the District of Nebraska to investigate JBS for persistent violations of the Humane Methods of Slaughter Act.

We must hold slaughterhouses accountable for their inhumane actions, especially during this pandemic.

JBS may be the worst, but every slaughterhouse operates in the same fashion. They all skirt the law to benefit their bottom line. Reopening slaughterhouses affected by COVID-19 and speeding up kill lines are bad policies. Slaughterhouse workers often commit violations, yet authorities rarely hold them accountable.

How can we trust them to take safety measures to slow the COVID-19 pandemic when they’ve apparently never cared about following the law?

Sign the petition below to support PETA’s action to keep slaughterhouses—many of which are filled with employees infected with the novel coronavirus—closed: