The scientific data continue to stack up against depression experiments on animals. In a new paper published in the Journal of Applied Animal Ethics Research, researchers asked whether depression tests on rats were contributing to knowledge about human major depressive disorder (MDD). One of the biggest measures of success for a scientist is to publish their experiments and have other researchers cite their papers. The authors of this new study found that most medical papers on human MDD rarely cited animal experiments, including the forced swim test (FST).

So the FST is terrifying animals and producing misleading results, and it doesn’t even benefit the scientists conducting it or further the discussion about depression in humans.

The authors’ recommendation? Stop doing this cruel test: “[W]e propose a ban on the use of the FST in rats.”

After hearing from PETA scientists, many of the world’s top pharmaceutical companies have already banned the FST. You can help by urging Eli Lilly CEO David Ricks to join them.

It’s a tired, bogus line that experimenters roll out to justify what they do to animals in laboratories: This could maybe, sometime in the future, when Jupiter aligns with Mars, have something to do with helping humans.

The reality is that 95% of new drugs that test safe and effective in animals fail in humans.

And two recent papers published in medical journals prove that those on the front lines of caring for humans with depression know this: The results of experiments on rats and monkeys don’t mean squat when it comes to helping human patients.

In one peer-reviewed paper published in Frontiers of Psychology in July 2020, the authors looked at whether depression experiments on rats had contributed to knowledge about depression, aka “major depressive disorder” (MDD), in humans. To do that, the authors assessed what kinds of papers primarily cited rat depression experiments to justify the papers’ conclusions. Think of the cited papers as scientific building blocks.

They found that “rat model research has contributed very little to the contemporary clinical understanding of MDD.”

In other words, cruel rat depression experiments were a big fat failure at doing what they’re supposed to—helping humans.

In December 2019, the authors of another peer-reviewed paper, published in the scientific journal Alternatives to Laboratory Animals, looked at what kinds of studies were most often cited in human medical papers about depression.

Here’s now the authors put it: “Our results suggest that, in this field of medical research, human-based in vitro and in silico research approaches are more promising than NHP [non-human primates] studies, in generating new hypotheses and methods for subsequent clinical research.”

The researchers who wrote the 2019 paper took their analysis a step further. In a June 2020 paper published in the journal PLoS ONE, they found that papers describing experiments on animals were pretty much only citing other animal experiment papers.

In other words, experiments on animals are happening in their own silo—a self-perpetuating club of cruelty that only serves to keep experimenters on grant gravy trains and tenure tracks.

Right now, animals are suffering in horrific psychiatric experiments that don’t accurately predict how a treatment or medication will affect humans. Such useless experiments do nothing to further our understanding of mental illness in humans.

That’s certainly the case with Elisabeth Murray’s little lab of horrors, in which the National Institutes of Health (NIH) experimenter inflicts brain damage on monkeys and then frightens them with fake spiders and snakes. 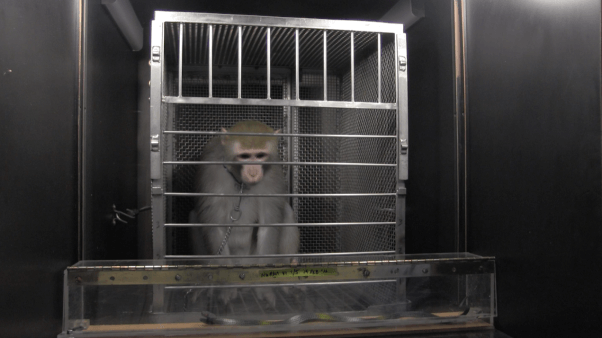 You can help shut down this laboratory. What are you waiting for?