In an interview for TVG Network, jockey Robby Albarado let slip a vile comment that makes light of abuse—right after violating whipping rules—and revealed a callous attitude about inflicting pain and punishment on horses. When asked about his relationship with filly Swiss Skydiver, the jockey spilled these remarks on a livestream:

Interviewer: “You love this filly. You call her your girlfriend. How special is she to you?”
Albarado: “Well, I hit her once. I hope she still loves me.” 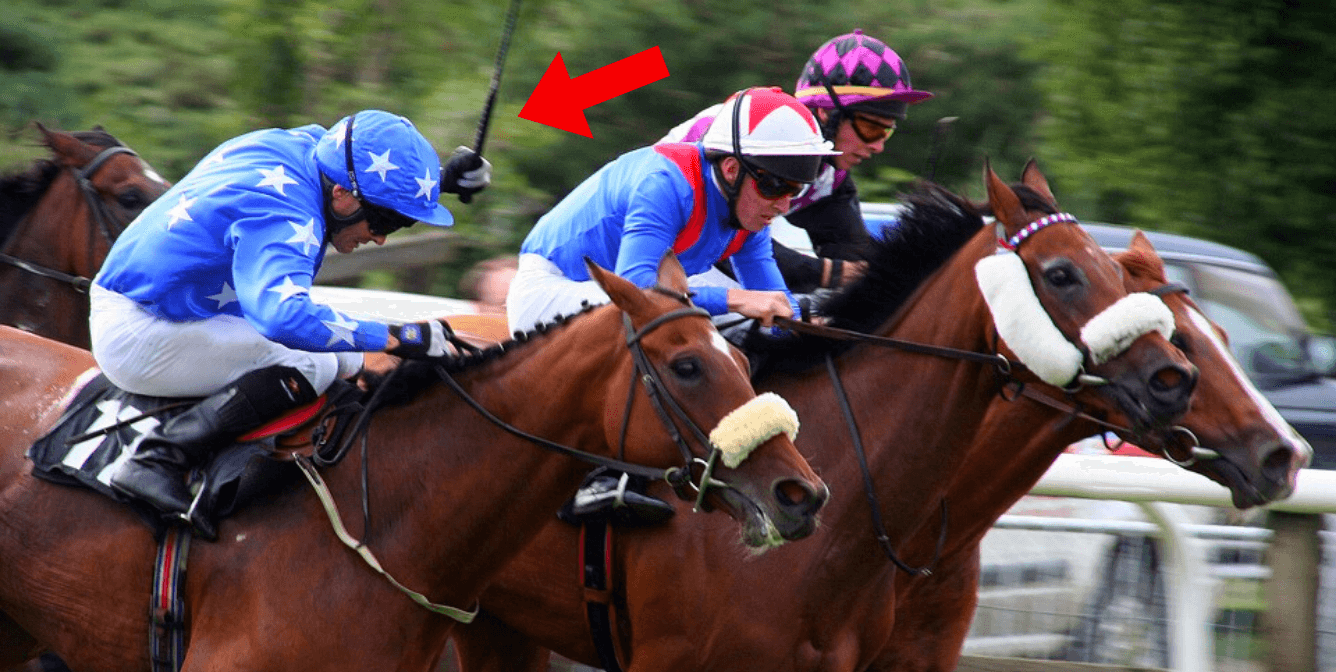 Words Hurt, but So Do Whips

The network quickly pulled the segment, and Santa Anita Park (the track where Albarado raced Swiss Skydiver) scrubbed it from its archives. The park also slapped Albarado with a three-day suspension for raising his arm above his shoulder while striking Swiss Skydiver, a violation of the California Horse Racing Board’s whipping regulations.

Santa Anita was right to pull this footage and suspend Albarado. However, it appears that the industry hasn’t considered the irony of airing footage from the actual race showing jockeys whipping Swiss Skydiver and other horses. This raises a question: If the horse racing industry considers it taboo to talk about hitting another animal, why does it allow jockeys actually to strike horses to try to make them run faster (which hasn’t worked)?

Even though horses’ skin is just as sensitive as human skin is, jockeys in some states routinely whip horses 15 to 20 times during a single race. In some cases, jockeys have gotten away with little more than a slap on the wrist after their forceful blows have left horses with open wounds. This must stop.

From drugging horses to keep them running despite injuries to sending horses to slaughter when their racing days are over, cruelty is the norm in the horse racing industry. It needs to adopt a zero-tolerance policy for harmful actions, not just harmful language—starting with a ban on whipping horses. A whipping ban, like the one in place in New Jersey, would be a meaningful step forward. Santa Anita Park has pushed for banning the use of the whip in races in California.

Other vital and long overdue measures include installing CT scan equipment at all tracks so that horses’ bone injuries can be detected, banning trainers with multiple violations, and replacing dirt tracks with synthetic ones (which are less likely to injure horses).

Here’s How You Can Help Horses

The words that we use have the power to create a more inclusive world or to perpetuate oppression, so everyone should think before they speak. People should be outraged by Albarado’s words, but they should be just as furious that horses—who form lifelong bonds with their families—are allowed to be whipped in the first place. Please take action to help protect horses in New York: