It doesn’t take a rocket scientist to know that whipping horses while forcing them to run as fast as they possibly can is abusive, but new research proves the common horse racing practice is both extremely harmful and unnecessary for racing integrity. 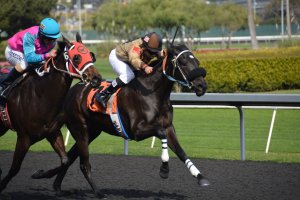 While horse skin is thicker overall than human skin, it doesn’t insulate the animals from the pain that a whip strike causes. The part of the skin that’s enervated—that registers the pain—is the same thickness as that of humans. The study also found that humans and horses have “equivalent basic anatomic structures to detect pain in the skin,” with no significant differences in nerve ending concentration.

We already knew that whipping horses doesn’t make them run faster, but a more recent study provides evidence that it also doesn’t improve steering, reduce interference, or improve safety. It’s not essential to horse racing at all. The research provides nothing to commend the use of whips in races, and the authors of the study note that animal welfare concerns and public discontent far outweigh the feeble justifications for whipping.

In addition to sharing our capacity to feel pain, horses care deeply for their families and have complex emotions. They shouldn’t be abused and forced to run for anyone’s entertainment, no matter what the conditions are. Pushing for stricter rules on racetracks is a step in the right direction.

New Jersey became the first state to issue a statewide ban on whipping, but the work is far from done. Help us urge the New York State Gaming Commission to adopt a similar regulation:

Take Action to Have Whipping Banned in New York