Last week, PETA neuroscientist Dr. Emily Trunnell and psychologist Dr. Constança Carvalho published a paper in the esteemed journal Drug Discovery Today. The article examines the use of the cruel forced swim test by the top 15 pharmaceutical companies in the world and shows that this decades-old, unscientific experiment on animals was not successful in determining whether a test substance would be effective in treating human depression. 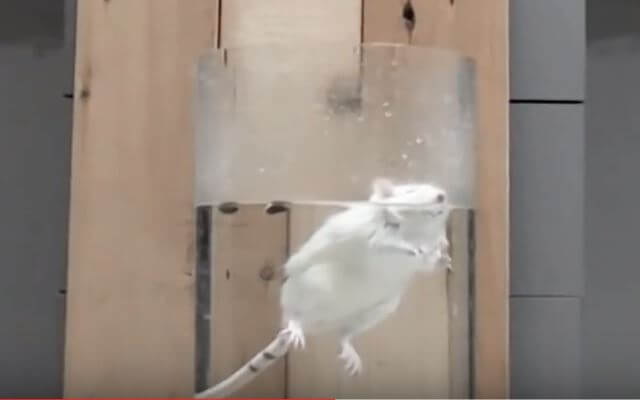 What Is the Forced Swim Test?

In forced swim tests, experimenters put mice, rats, guinea pigs, hamsters, or gerbils in inescapable containers filled with water. The panicked animals try to escape by attempting to climb up the sides of the beakers or even diving underwater in search of an exit. They paddle furiously, desperately trying to keep their heads above water. Eventually, they become immobile and start to float.

Laboratory staff dose some of these animals with human antidepressant drugs to see if they struggle and swim for longer than others before starting to float. Although the terrifying experience that rodents endure in laboratories is nothing like what humans suffering from depression go through in real-world settings, the results of the forced swim test are somehow expected to predict how drug compounds will affect human brain chemistry.

The paper found that at least 15,238 animals were used in forced swim experiments and that 109 compounds were tested.

Of these 109 compounds, only 31 have been investigated for their possible effects on depression in humans. Of these 31, only seven were predictive of the human outcome. Furthermore, none of the compounds are currently approved for the market.

The Tide Is Turning Against the Forced Swim Test

And following PETA U.K.’s urging, influential scientists working for the U.K.’s Medicines and Healthcare products Regulatory Agency concluded in a scientific paper published online that the forced swim test (and equivalent tests on animals) can’t predict the effectiveness of potential new antidepressant drugs. In that article, the authors cited PETA’s work with pharmaceutical companies to end the test.

This new paper is another nail in the coffin of the failed forced swim test. Previous papers published by coauthor Carvalho have demonstrated that human medical researchers favor data from human-relevant, non-animal methods over data from experiments on animals.

Help Animals in Laboratories and Humans With Depression

The forced swim test is bad science. It does nothing more than terrify animals and delay the development of new effective treatments for the humans who desperately need them. You can speak up for animals used in the test by urging pharmaceutical giant Eli Lilly to ban it immediately.

It only takes a minute to take action using your phone or computer, so what are you waiting for?