What the Health—the follow-up film from the creators of the groundbreaking documentary Cowspiracy—is taking the Netflix-watching world by storm. In the film, executive producer Joaquin Phoenix blows the lid off “the collusion and corruption in government and big business that is costing us trillions of healthcare dollars, and keeping us sick.”

Much as they did to the other recent Netflix game changer, Okja, many folks—celebrities included—are expressing strong reactions to the film. The documentary has undoubtedly had a major impact on vegans and nonvegans alike, persuading many to consider a plant-based diet.

We applaud these celebrities for using their power and influence to help encourage others to watch this life-changing documentary. Take a look at some of our favorite What the Health celeb tweets:

Almost every day someone emails me to say they've seen @wthfilm and are re-thinking their approach to food. So proud of Kip and Keegan and … pic.twitter.com/i9vfmWEgif

What should I be watching on @netflix ?! Recently watched @ChasingCoral and #WhatTheHealth and loved them! Suggestions please! ⬇️⬇️⬇️⬇️

What the Health on Netflix…..smh crazy but informative. Sad bout what we are lied to about.

So I just got done watching #WhatTheHealth

Nah not healthy watch “What the Health on Netflix https://t.co/50tb80UVXY

Just watched -what the health on Netflix and had to thank THE MOST HIGH for leading me to a plant based diet shit is realer than I thought!

What the health – actually made me sad and gave me a headache I thought I knew it was fuckd up but it's what I thought and even more fukd!!

About to @Postmates my groceries . #busyMonday . Has anyone watched what the health lol I'm so confused what to eat now

Watching "what the Health" on @Netflix extreme but true,
Opened my eyes to more controversial companies. Every1 should WATCH THIS! #change

This documentary “What the health” is blowing my mind right now. It’s on Netflix. Please watch if you can.

Trying to find breakfast to eat after watching the documentary What The Health….the struggle is real and our food industry is f$!ked.

“What The Health” I recommend watching this. There are a lot of things they don’t tell you about the food you’re eating every day.

Now watching “What the Health” 👀 can I have a plant based diet?? Knowledge is everything

Just finished watching the Netflix documentary "What The Health" and all I have to say is WOW!!!

Lol it lowkey would make someone want to go vegan tho https://t.co/fB7YPDd3WN

I've watched 15 minutes of "What the Health" on Netflix…. and I couldn't be more happy I am vegan… #confusionistheirgame #whatthehealth

Watched the documentary "WHAT THE HEALTH" on Netflix. So eye opening!!!! Must watch

Well, this was going to happen regardless, just didn't think so soon. Going plant based after watching "What the health".

Phoenix has never been one to shy away from tough subjects, having helped PETA expose wool producers, the trade in dog leather, the cold-blooded horror of the exotic-skins industry, and more. And he isn’t shying away from this issue, either. 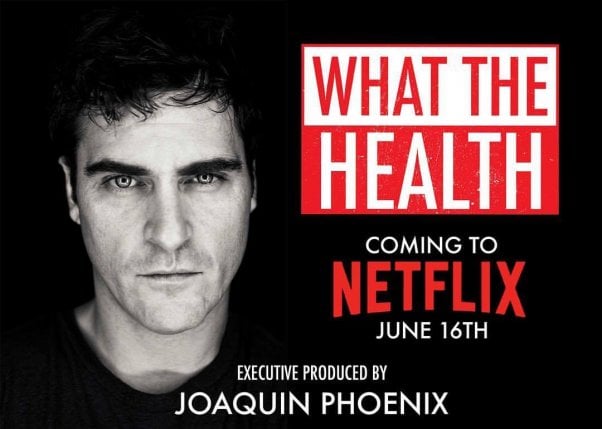 Get Inspired by What the Health and Other Animal Rights Films

Catch What the Health on Netflix. And if it leaves you hungry for more of what food producers aren’t telling you, click the button below to check out some other eye-opening films available for streaming, and to pledge to go vegan: