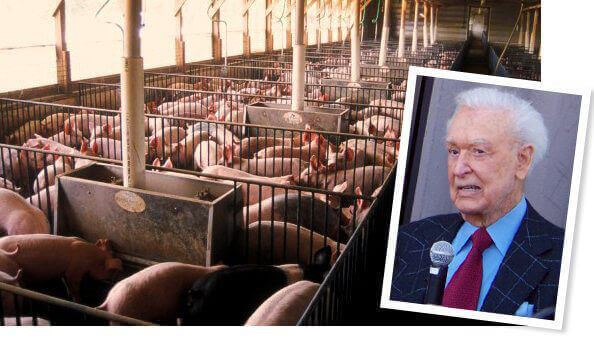 The horrors revealed by PETA’s latest factory farm investigation show how important it is that organizations and individuals not lose the ability to uncover cruelty to animals, especially when it’s carefully hidden from public view. These sorts of exposés require months of scrutiny to document how the abuse is habitual and systematic, rather than being mere isolated incidents, so the requirements of S.B. 695 would make investigators’ work virtually impossible.

As Bob—whose alma mater is Drury University in Springfield, Missouri—stated in his letter to state legislators, “Missouri lawmakers must realize that consumers are demanding better treatment of animals used for food, not for the agriculture industry to cover up illegal acts and penalize those who try to expose routine cruelty. Please show consumers that Missouri has nothing to hide by opposing S.B. 695.”

PETA is grateful to celebrities like Bob, Cloris Leachman, and Katherine Heigl for making the public aware of the dangers of “ag gag” legislation because the wealthy industrial-agriculture interests pushing these bills appear to be ensuring that they’ll wield influence behind the scenes by making large donations to lawmakers, as seen recently in Iowa and Utah.

How You Can Help Animals on Factory Farms

If you’re a Missouri resident, please join Bob Barker in asking your state senators to vote against this bill and to continue to allow people to expose blatant cruelty to animals.