This may look like something straight out of a film made with CGI, but these cattle are 100 percent real—and the reason they look like this is actually really sad:

They’re called Belgian blue bulls, and the reason they look so bulky is because of a naturally occurring mutation called “double muscling,” which occurs when the animals lack a certain protein that regulates muscle growth.

While double muscling is natural, the way the mutation has been perpetuated is not. The meat industry selectively breeds animals who exhibit this mutation to produce bigger animals and, therefore, more meat.

This comes at a high price for the animals.

Because of their abnormally large size, Belgian blue cattle often endure a slew of serious health problems. Pregnancies are very difficult, and the animals almost always require C-sections to deliver their babies. Once the calves are born, they may have a number of birth defects, including enlarged tongues, which can make it difficult—or even impossible—for them to nurse. They may also suffer from cardio-respiratory, bone, and joint problems, among other ailments. All this can mean a very uncomfortable existence for these animals and oftentimes leads to a premature death.

However, manipulating animals to yield bigger profits is nothing new for the meat and dairy industries, and it’s not just Belgian blues who suffer. Cattle raised for food are regularly dosed with drugs to make them grow faster and keep them alive in miserable, cramped conditions. Instead of taking sick cattle to see a veterinarian, many feedlot owners simply give them even higher doses of human-grade antibiotics in an attempt to keep them alive long enough to make it to the slaughterhouse.

And cows on dairy farms fare no better. 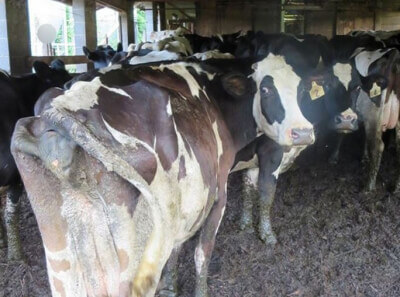 Cows produce milk for the same reason that people do: to feed their babies. But on today’s factory dairy farms, cows are forcefully impregnated over and over again so that they’ll produce a steady supply of milk. Their babies are taken from them shortly after they’re born so that humans can have the milk that was meant for the calves. Male calves are sold for veal, and female calves are forced to repeat the same cycle of misery that their mothers endured.

Cows and bulls are sensitive animals and cows mourn the loss of their babies, whether they’re Belgian blues or regular-sized bovines. If you want to say no to unnatural breeding and breaking up families, pledge to go vegan and start saving up to 100 animals per year.