UPDATE: Santa Paws brought a gift early this year! We’re delighted to share some great news to kick off the holidays—and what could be better than a happy ending for puppies?

Following the dynamic campaigns of PETA entities worldwide, the 70 4-month-old beagles sent for horrible experiments in an Indian laboratory have just been rescued! A huge “thank-you” to the more than 50,000 compassionate people around the world who e-mailed Indian officials through the websites of PETA U.S. and other PETA entities urging them to take action. The dogs have been removed from quarantine and handed over to animal protection groups with the permission of the Ministry of Environment & Forests and through efforts made internally in government by MP Maneka Gandhi.

During its campaign, PETA India discovered that Beijing Marshall Biotechnology Co., Ltd. (a branch of the notorious animal-breeding facility Marshall BioResources), had sent a letter to the airline used for the animals’ transport—which has a longstanding policy against shipping animals to laboratories—giving false assurances that the beagles “won’t be hurt or killed as Lab Animal [sic].”

While these 70 lucky dogs have been spared lives of misery and pain in a laboratory, there’s still work to be done to keep more animals out of the hands of experimenters in India. Air India recently resumed shipping animals to laboratories; please urge airline officials to stop delivering animals to their torturers and executioners. 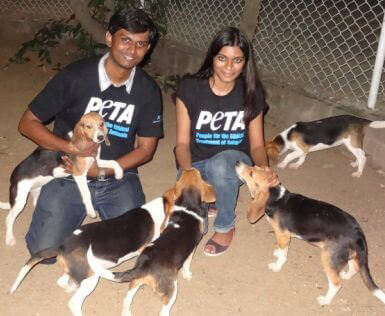 Thanks to a whistleblower, PETA India found out that 70 beagles exported from China into India and falsely labeled as “pets” are actually to be used in deadly experiments.  PETA India is calling on the Indian government to conduct an urgent investigation. It has also asked officials to confiscate the dogs and allow the organization to give them a chance at living in peace in adoptive homes instead of facing caging, poisoning, and death in a laboratory.

As I write, the beagles are being held at Animal Quarantine and Certification Services in Chennai. Their falsified  import paperwork should render the shipment illegal, as PETA India has learned that the animals, sent from commercial breeder Beijing Marshall Biotechnology Co. Ltd., are actually meant for a laboratory at Advinus Therapeutics.

People may generally picture mice, rats, and rabbits when they think about animals used in experiments, but a great many dogs—including puppies and homeless animals from shelters—are tormented and killed in laboratories as well. Dogs are often used in toxicology tests in which they are force-fed massive amounts of a drug, industrial chemical, pesticide, or household product, causing a slow, excruciating death from poisoning.

Oddly, experimenters particularly favor beagles because of their size and their eager-to-please nature—a quality that would normally make a person want to protect and care for them, not torture them.

Even though I have lived with beagles and beagle mixes since childhood—including my current companions, Beau and Oliver—when it came to understanding the inexcusable cruelty of experimenting on animals, I never quite “got it” until I saw this picture during a PETA conference. That’s when I realized that there could be never be sufficient justification for inflicting this kind of suffering on a dog so much like Beau.

Then I realized something else: No animal deserves to be burned, poisoned, mutilated, or killed in a laboratory. They’re all living beings with thoughts, feelings, and desires—including the desire to live free from harm—just like my dog. Just like me. Even if animal experimentation produced reliable results (which it doesn’t), it’s no more ethical to torture a mouse, a rabbit, or a monkey in a laboratory in the name of science than it would be to torture us or our animal companions.

PETA entities worldwide are 100 percent committed to ending the torture of animals in cruel tests and experiments, and they’ve already won many victories. But there’s more to be done—and they need your help. Learn how you can help keep animals out of laboratories.