Awarded more than $90 million from the National Institutes of Health to infect mice and monkeys with Ebola and then observe them as they endured agonizing deaths, animal experimenter Michael Katze seemed to think he was “untouchable.” But his apparent harassment of humans eventually caught up with him. And he’s just one of many animal experimenters whose victims apparently included humans, too.

At the University of Washington (UW), where he was a tenured microbiology professor, Katze seemingly found a legally permissible way to act on his violent impulses.

Katze specialized in infecting mice and monkeys (some of whom stay with their mothers for their entire lives when in their natural habitats) with Ebola, an infectious agent notorious for causing agonizing deaths. 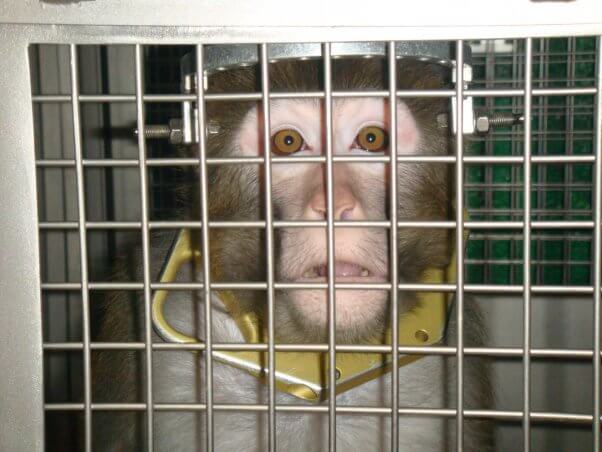 This monkey at the University of Utah was used in invasive neurological surgeries, similar to the way monkeys had been used in University of Washington experiments.

In one experiment, dying mice were allowed to suffer until their weights plummeted by 20% within just five or six days. In another, it took seven days for monkeys whom he had infected with the virus to die—and before they did, they “showed the hallmarks of Ebola hemorrhagic fever.” Such “hallmarks” include severe muscle pain, headaches, vomiting, diarrhea, and internal and external bleeding.

According to UW, during his time as a professor, Katze also routinely made derogatory comments about women as well as gay and Asian employees and made demanding, hostile, and threatening remarks to staff. He apparently asked a staff member to solicit a prostitute for him, too, and he asked another to pick up his mail, vacuum his apartment, and shop for furniture for him.

According to The Seattle Times, Katze “persistently, and for an extended period of time, made unwanted sexual comments and jokes” to a female employee who was under his direct supervision, reminding her multiple times that he could fire her.

Also according to BuzzFeed News, one of his alleged sexual harassment victims, referred to as “Jane Doe” in court documents, said that Katze thought he was “untouchable.” However, after years of tolerating Katze’s disturbing behavior, UW finally fired him in August 2017. His laboratory had been shut down the previous year.

Katze showed no remorse for his deplorable actions, reported BuzzFeed News—perhaps unsurprising behavior from a person who profited from vulnerable animals’ suffering and deaths.

During UW’s investigation, the animal experimenter told an officer, “My job is to get grants. I am singularly focused on training scientists. This kind of sh*t is completely unimportant to me,” according to BuzzFeed News.

He wasn’t just a UW professor, he was also the associate director at the UW-based Washington National Primate Research Center (WaNPRC)—a taxpayer-funded laboratory where, despite Katze’s well-deserved sacking and the concern over the possible spread of COVID-19, monkeys continue to be subjected to horrific experiments. (That is, when UW experimenters can find them. A monkey there was recently lost, and staff never bothered to report the incident.)

But there are two quick and easy steps we can all take to help ensure the health of primates at the WaNPRC and all animals used for experiments. First, demand that the WaNPRC immediately stop all experimentation on primates and transfer them to sanctuaries, where they can be left in peace for the remainder of their lives:

Then, ask the Department of Health & Human Services to require a psychiatric evaluation of anyone applying for federal funding to conduct experiments on animals: