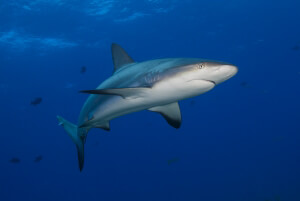 After a long-distance swimmer was bitten by a juvenile great white shark off Manhattan Beach Pier in California over the weekend, PETA wants to help keep swimmers and surfers out of harm’s way. How? By asking Manhattan Beach Mayor Amy Thomas Howorth to ban fishing off the pier permanently.

According to news reports, the shark had been hooked by an angler and had struggled for more than 30 minutes before biting the swimmer, who spent eight hours in the emergency room. It’s illegal to fish for great white sharks in California, and if anglers do catch a shark, they are required to cut the line immediately—a rule that was carelessly ignored in this case. Capt. Tracy Lizotte, a Los Angeles County lifeguard, told the media that the shark “was trying to get off the line.” He continued, “He was agitated and was probably biting everything in his way and then the swimmer swam right into the shark’s line.”

While there are a handful of well-publicized shark attacks around the world each year, this incident proves that humans pose the much bigger threat. We kill and consume more than 100 million sharks and billions of other sea animals every year—a deadly practice that puts both sea life and humans at risk.