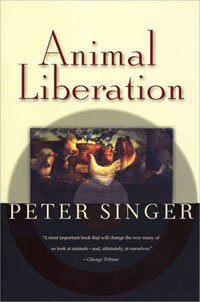 First published in 1975, Animal Liberation was a philosophical bombshell. It forever changed the conversation about our treatment of animals. It made people—myself included–change what we ate, what we wore, and how we perceived animals.

When a friend gave me a copy of Animal Liberation in 1980, it was an epiphany. I thought, “Here it is, this is what I’ve been thinking. Someone has given a voice to it.” Long after I finished reading the book, Peter Singer’s words kept echoing through my mind.

I had been working in animal protection for 10 years in Washington, D.C., as a deputy sheriff, cruelty investigator, and head of the animal-disease-control division of the D.C. Commission on Public Health. I had witnessed appalling acts of cruelty to animals and I would cry as I drove home at night. I still ate meat and wore leather, as I had yet to make that connection, but I was plagued by an underlying sense that there was something inherently wrong with how animals were so easily subjugated and abused.

After reading Animal Liberation, I realized that in the same way that racist and sexist views allowed us to discriminate against minorities and women, speciesism allowed us to inscribe an inferior status on animals and to regard them not as individuals, but as objects and means to fulfill our desires.

I talked about the book, I wrote about it, I gave copies to everyone I knew. At that time, I was being honored as one of the Washingtonians of the Year for my work to create the country’s first spay/neuter clinic as well as an adoption program. During my speech, I quoted extensively from Animal Liberation, trying to change other people’s thinking the way Peter Singer had changed mine. It was then that I saw a need for an organization that would educate people about animal suffering and work to win their basic rights. That year I started PETA.

The 40th anniversary edition of Animal Liberation is available for purchase starting April 14, 2015. Here, a few excerpts from the book:

“Animal Liberation” may sound more like a parody of other liberation movements than a serious objective. The idea of “The Rights of Animals” actually was once used to parody the case for women’s rights. When Mary Wollstonecraft published her Vindication of the Rights of Women in 1792, her views were widely regarded as absurd, and before long, an anonymous publication appeared entitled A Vindication of the Rights of Brutes. The author of this satirical work (now known to have been Thomas Taylor, a distinguished Cambridge philosopher) tried to refute Mary Wollstonecraft’s arguments by showing that they could be carried one stage further. If the argument for equality was sound when applied to women, why should it not be applied to dogs, cats, and horses? …

When we say that all human beings, whatever their race, creed, or sex, are equal, what is it that we are asserting? Like it or not, we must face the fact that humans come in different shapes and sizes; they come with different moral capacities, different intellectual abilities, different amounts of benevolent feeling and sensitivity to the needs of others, different abilities to communicate effectively, and different capacities to experience pleasure and pain. In short, if the demand for equality were based on the actual equality of all human beings, we would have to stop demanding equality. …

The existence of individual variations that cut across the lines of race or sex, however, provides us with no defense at all against a more sophisticated opponent of equality, one who proposes that, say, the interests of all those with IQ scores below 100 be given less consideration than the interests of those with ratings over 100. Perhaps those scoring below the mark would, in this society, be made the slaves of those scoring higher. Would a hierarchical society of this sort really be so much better than one based on race or sex? I think not. But if we tie the moral principle of equality to the factual equality of the different races or sexes, taken as a whole, our opposition to racism and sexism does not provide us with any basis for objecting to this kind of inegalitarianism. …

Fortunately, there is no need to pin the case for equality to one particular outcome of a scientific investigation. … There is no logically compelling reason for assuming that a factual difference in ability between two people justifies any difference in the amount of consideration we give to their needs and interests. The principle of the equality of human beings is not a description of an alleged actual equality among humans: It is a prescription of how we should treat human beings.

Jeremy Bentham, the founder of the reforming utilitarian school of moral philosophy, incorporated the essential basis of moral equality into his system of ethics by means of the formula: “Each to count for one and none for more than one.” In other words, the interests of every being affected by an action are to be taken into account and given the same weight as the like interests of any other being. …

It is an implication of this principle of equality that our concern for others and our readiness to consider their interests ought not to depend on what they are like or on what abilities they may possess. Precisely what our concern or consideration requires us to do may vary according to the characteristics of those affected by what we do: concern for the well-being of children growing up in America would require that we teach them to read; concern for the well-being of pigs may require no more than that we leave them with other pigs in a place where there is adequate food and room to run freely. But the basic element—the taking into account of the interests of the being, whatever those interests may be—must, according to the principle of equality, be extended to all beings, black or white, masculine or feminine, human or nonhuman.

Thomas Jefferson, who was responsible for writing the principle of the equality of men into the American Declaration of Independence, saw this point. It led him to oppose slavery even though he was unable to free himself fully from his slaveholding background. He wrote in a letter to the author of a book that emphasized the notable intellectual achievements of Negroes in order to refute the then common view that they have limited intellectual capacities: “Be assured that no person living wishes more sincerely than I do, to see a complete refutation of the doubts I myself have entertained and expressed on the grade of understanding allotted to them by nature, and to find that they are on a par with ourselves … but whatever be their degree of talent it is no measure of their rights. Because Sir Isaac Newton was superior to others in understanding, he was not therefore lord of the property or person of others.”

Similarly, when in the 1850s the call for women’s rights was raised in the United States, a remarkable black feminist named Sojourner Truth made the same point in more robust terms at a feminist convention: “They talk about this thing in the head; what do they call it? [“Intellect,” whispered someone nearby.] That’s it. What’s that got to do with women’s rights or Negroes’ rights? If my cup won’t hold but a pint and yours holds a quart, wouldn’t you be mean not to let me have my little half-measure full?”

It is on this basis that the case against racism and the case against sexism must both ultimately rest; and it is in accordance with this principle that the attitude that we may call “speciesism,” by analogy with racism, must also be condemned. Speciesism—the word is not an attractive one, but I can think of no better term—is a prejudice or attitude of bias in favor of the interests of members of one’s own species and against those of members of other species. It should be obvious that the fundamental objections to racism and sexism made by Thomas Jefferson and Sojourner Truth apply equally to speciesism. If possessing a higher degree of intelligence does not entitle one human to use another for his or her own ends, how can it entitle humans to exploit nonhumans for the same purpose?

Many philosophers and other writers have proposed the principle of equal consideration of interests, in some form or other, as a basic moral principle; but not many of them have recognized that this principle applies to members of other species as well as to our own. Jeremy Bentham was one of the few who did realize this. In a forward-looking passage written at a time when black slaves had been freed by the French but in the British dominions were still being treated in the way we now treat animals, Bentham wrote:

“The day may come when the rest of the animal creation may acquire those rights which never could have been withholden from them but by the hand of tyranny. The French have already discovered that the blackness of the skin is no reason why a human being should be abandoned without redress to the caprice of a tormentor. It may one day come to be recognized that the number of the legs, the villosity of the skin, or the termination of the os sacrum are reasons equally insufficient for abandoning a sensitive being to the same fate. What else is it that should trace the insuperable line? Is it the faculty of reason, or perhaps the faculty of discourse? But a full-grown horse or dog is beyond comparison a more rational, as well as a more conversable animal, than an infant of a day, or a week or even a month, old. But suppose they were otherwise, what would it avail? The question is not, Can they reason? nor Can they talk? but, Can they suffer?”

In this passage, Bentham points to the capacity for suffering as the vital characteristic that gives a being the right to equal consideration. … If a being suffers, there can be no moral justification for refusing to take that suffering into consideration. No matter what the nature of the being, the principle of equality requires that [his or her] suffering be counted equally with the like suffering—insofar as rough comparisons can be made—of any other being. …

Most human beings are speciesists. … [O]rdinary human beings—not a few exceptionally cruel or heartless humans, but the overwhelming majority of humans—take an active part in, acquiesce in, and allow their taxes to pay for practices that require the sacrifice of the most important interests of members of other species in order to promote the most trivial interests of our own species.…

Even if we were to prevent the infliction of suffering on animals only when it is quite certain that the interests of humans will not be affected to anything like the extent that animals are affected, we would be forced to make radical changes in our treatment of animals that would involve our diet, the farming methods we use, experimental procedures in many fields of science, our approach to wildlife and to hunting, trapping and the wearing of furs, and areas of entertainment like circuses, rodeos, and zoos. As a result, a vast amount of suffering would be avoided.

To order a copy of Animal Liberation for yourself or friends, please visit shop.peta.org.