As a former English teacher, I can attest to how challenging it can be to get students excited about reading. It takes an exceptional story with exciting characters and high stakes to compete with TikTok, Instagram, and Snapchat in the minds of young people—and The Chain by award-winning suspense novelist Robin Lamont is one of them. 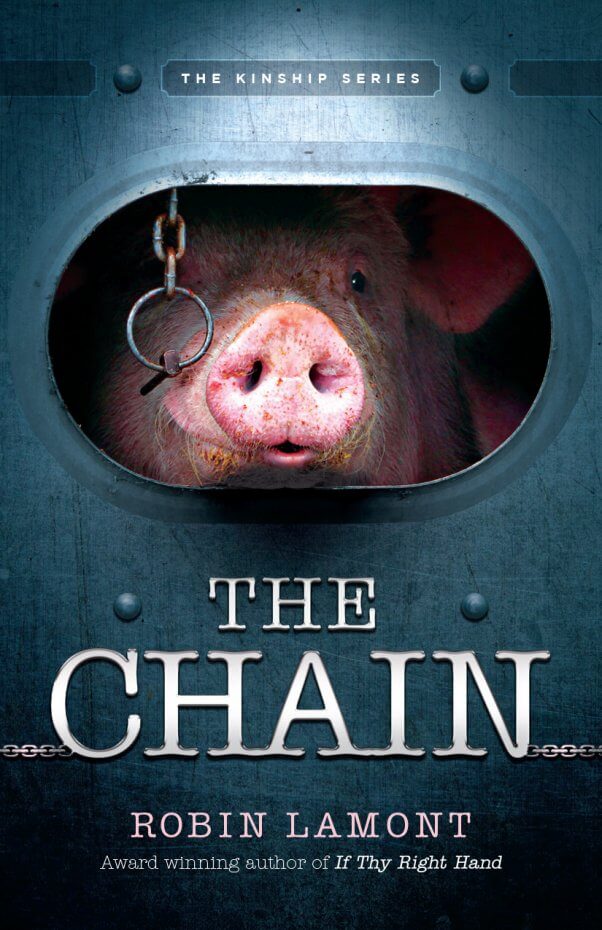 Jude has been summoned to Bragg Falls to meet with a whistleblower who has documented the dangerous conditions for workers and the cruel treatment of pigs about to be slaughtered at D&M Processing. But when she arrives, she finds that her contact has committed suicide and the video he made is gone. The deeper she probes, the more the town’s residents turn against her—afraid that an exposé will shut down the plant. But beyond the local resistance, there is a more sinister force that will do anything to hide what is happening behind the closed doors of the slaughterhouse.

This page-turner has everything necessary to engage even the most reluctant readers, from gripping mystery and breathtaking action to forbidden romance and a look inside two seemingly opposing worlds seldom seen by most: the world of an undercover animal rights investigator and that of slaughterhouse workers and their families. Bryan Monell of Farm Animal Rights Movement (FARM) writes, “Do yourself and the animals a favor. Read this book.”

Use the following activities to supplement students’ reading of the text and to meet these Common Core Learning Standards for Reading Literature in grades 9–12:

Introduce students to author Robin Lamont by having them read this page on her website. Explain to them that The Chain is the first of the three novels in The Kinship Series. Have them discuss the following questions:

Next, provide students with some background on the novel that they’re about to read. Inform them that it’s set in a rural town whose residents depend on a pig slaughterhouse for their livelihood. Explain that the novel not only sheds light on the cruelty endured by pigs raised for food but also reveals the exploitation of slaughterhouse workers by the animal agriculture industry. Have students read the article “Confessions of a Slaughterhouse Worker,” which details the toll that killing animals for a living can take on a person’s mental well-being, and discuss the following questions (after pointing out that in the U.K., slaughterhouses are also called “abattoirs”):

You may wish to extend this warm-up activity into a full lesson on the psychological phenomenon known as cognitive dissonance and “the meat paradox.” While a lesson about this can be uncomfortable, it can be used very effectively in the classroom to help students reflect on, understand, and change their own beliefs and behavior. Studies show that the experience of cognitive dissonance can be used to foster prosocial behavior and promote change.

Cognitive Dissonance and How We Treat Animals (Grades 6-12)

Have students respond to the following discussion questions as they read. Review answers as a class before moving on to the next section. 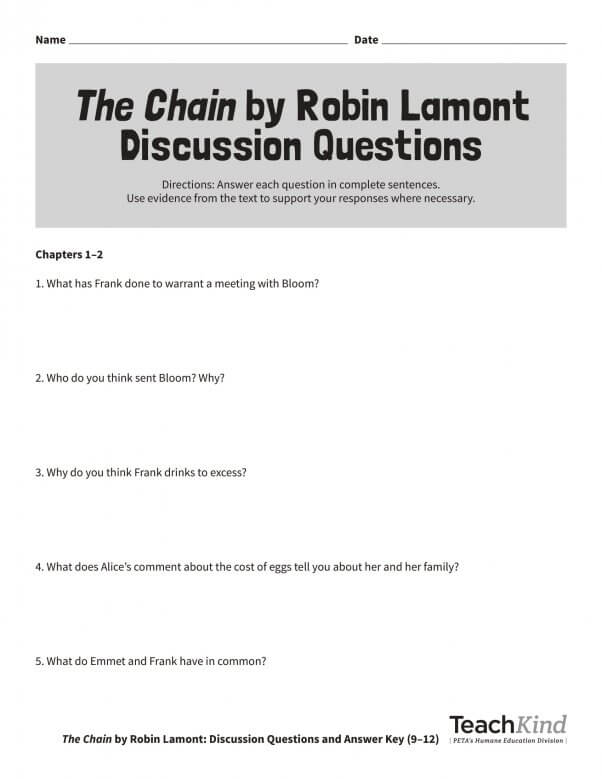 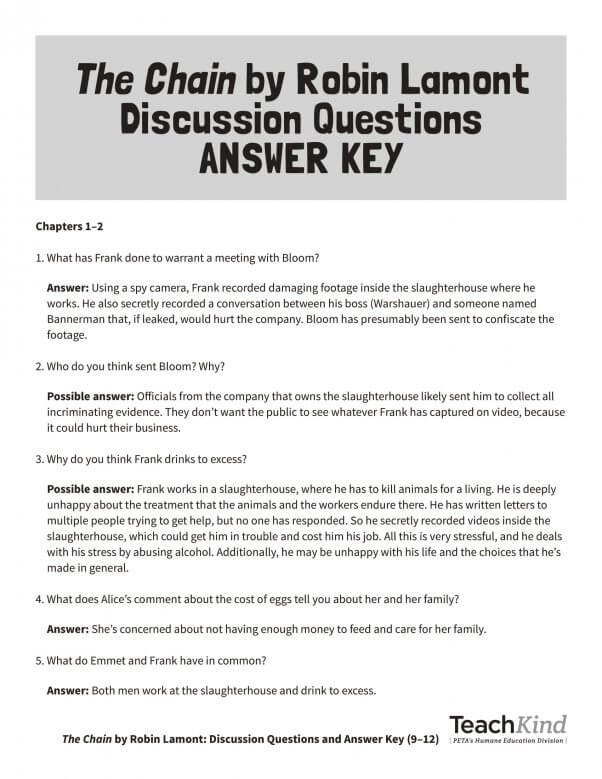 Have students choose one of the main characters (such as Jude, Emmett, or Caroline) to analyze. Explain that just as we can tell a lot about real people based on their words, opinions, behavior, and appearance, we can use these same indicators to judge characters in stories. Through giving them different traits, authors create characters who are likeable, villainous, or a complex mixture of both. It’s part of what makes stories like The Chain interesting.

Have students write their chosen character’s name at the top of a blank piece of paper and create two columns by drawing a vertical line down both the front and the back of the page. Label the left column “Examples from the text” and the right column “What does this reveal about the character?” Next, divide the columns into three equal rows on the front of the page and two on the back, forming a table with six spaces on the front and four on the back (not including the column labels). Finally, label each row with the following categories:

When they’re done, students should have a graphic organizer that looks like this: 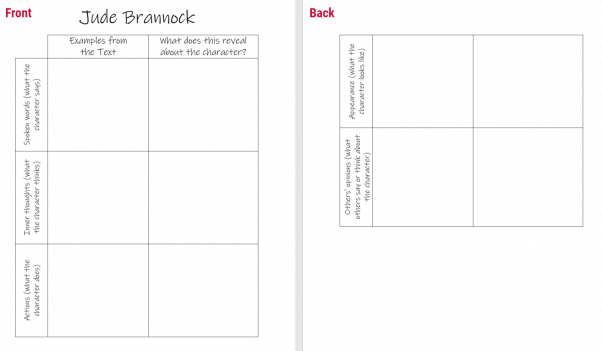 Ask students to review their responses to the discussion questions as well as the text to fill in their character analysis graphic organizers, quoting examples from the novel and explaining their significance in the appropriate columns. It may be helpful to discuss each characterizing trait category (for example, the character’s appearance can be determined by finding descriptions of their clothes, hairstyle, etc., in the text). You can also provide students with examples in each category, pointing out that under the “What does this reveal about the character?” column, they should use adjectives to describe their character’s personality (bolded in the following examples). Here are some examples for the character Frank Marino (who should be excluded from student analysis because he’s a minor character):

Finish by having students practice writing thesis statements for an analysis that they could write about their character using the adjectives that they came up with. For example, this might be an appropriate thesis statement for an analysis of Frank: “Even though he’s a protective husband and father, Frank’s honor and commitment to helping others—regardless of their species—costs him his mental health and ultimately his life.” You could then have students write an essay arguing their claim or respond to one of the following writing prompts:

Students have an exciting opportunity to chat with Robin Lamont, author of The Chain. After they’ve read the novel and completed the activities above, have them prepare questions for Lamont—these can be about the novel, authorship, animal rights, or whatever else students are interested in learning. Then, send her an e-mail to set up an interview. Because her staff is limited, she may have to answer your questions via e-mail, but in some cases, she may be able to chat via Skype.

Chat With the Author

Tell us how you plan to integrate this lesson into your curriculum and you could receive a free PDF copy of the book!

How Will You Use This Lesson?