Objectives: To help students understand the plight of animals who are kept in captivity and used for entertainment and to develop writing skills by writing letters asking for animals’ freedom.

In the wild, chimpanzees live in large, complex social structures. Chimpanzee youngsters wrestle with and playfully chase others all day, and they follow their mothers around everywhere while they learn how to find food and make tools. Just like humans, chimpanzees are highly social and intelligent animals who suffer from loneliness, stress, and depression when they’re kept in captivity and deprived of a complex social environment.

Across the country, chimpanzees languish in rundown roadside zoos, where they’re confined to small cages alone, gawked at, rented out for commercial appearances, and more—all against their will and in contrast to their natural behavior. One of those animals was a chimpanzee named Iris. Share her story with your students:

In 2015, Iris was living in solitary confinement at Chestatee Wildlife Preserve & Zoo in Georgia. She was confined to a dark, unheated concrete cell, with virtually nothing to look at except for four blank walls, and she typically had nothing to climb on or play with aside from the occasional toy that was thrown into her cell. The cell was cleaned only about twice a week, so Iris was often living amid her own waste and would smear her feces on the walls—a sign of her severe stress and deprivation. Her meals were slid to her through a small slot in the wall, and she often huddled under a filthy blanket on a metal bench. 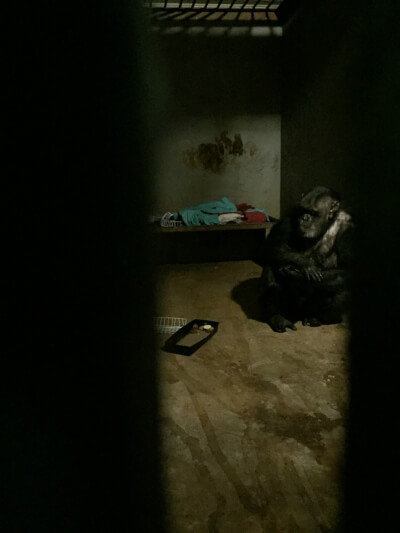 But in 2015, Iris’s life changed. With the help of a compassionate PETA patron, she was transported to Save the Chimps—a beautiful Florida sanctuary where she quickly became best friends with another chimpanzee named Abdul. 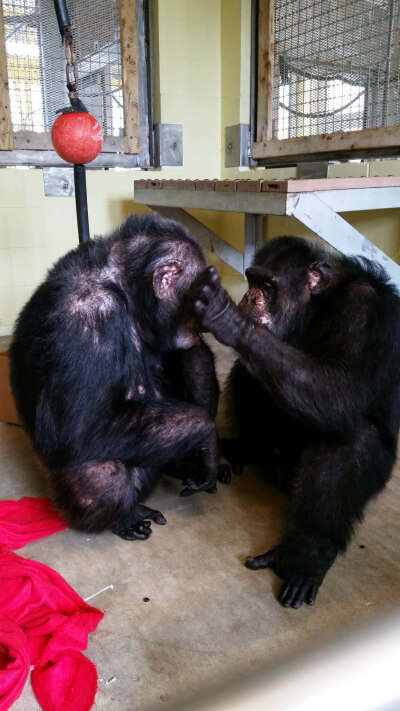 For probably the first time in her life, Iris can bask in the sun, breathe fresh air, and roam freely. She is thriving in her new home and continues to make new friends along the way. She is no longer a prisoner. Her rescue might seem like a miracle, but it wasn’t. Rescues like this happen, thanks to kind people—including students—who take action for animals who need help. 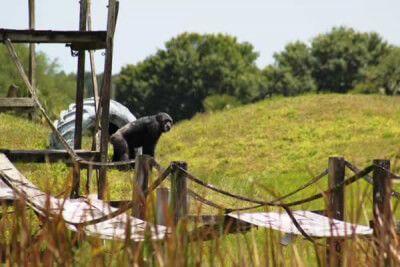 Now, using the following photographs, videos, and information, introduce your students to another chimpanzee who is kept in solitary confinement and is suffering ­right now at a roadside attraction in the United States.

Tootie was living in solitary confinement for 20 years (note that this is longer than your students have been alive) at a roadside zoo in Ohio called Stump Hill Farm, which has been repeatedly cited by the U.S. Department of Agriculture for animal welfare violations. Tootie is said to have spent his early years in the entertainment industry and was most likely kidnapped from his mother as an infant and forced to perform meaningless tricks for the camera. Today, Tootie lives in a sanctuary, after  the Ohio Department of Agriculture rescued him from his imprisonment and granted him a new lease on life! 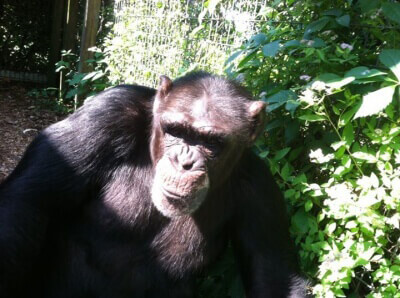 Louie is a chimpanzee living in solitary confinement in a small cage at the DeYoung Family Zoo in Michigan’s Upper Peninsula. Even though chimpanzees aren’t naturally weaned until they’re 4 or 5 years old, he was shipped to the zoo as an infant to act as a photo prop. Since winters in Michigan’s Upper Peninsula are harsh and too cold for a chimpanzee, Louie is undoubtedly forced to spend much of his time cooped up indoors.

Joe was alone at a roadside attraction in Alabama called The Mobile Zoo, where he was dumped by his trainer at age 10 and had been languishing in almost complete isolation for 16 years. The zoo has even been cited for allowing visitors to throw peanuts at him, causing him to lash out in response. Today, Joe lives in a lush sanctuary in Florida called Save the Chimps, where he can climb, play, and make friends.

Have students reference the text above and conduct additional research on chimpanzees or the effects of captivity and isolation on primates to draft short letter to the roadside zoo holding Louie captive. Students can urge the owner to release him to a sanctuary, where he can roam, explore, climb, play, and enjoy the company of other primates.

Mail letters asking for Louie to be released to a reputable sanctuary here:

Your students can make this year a new beginning for Louie by helping ensure that he finally experiences the companionship, kindness, and freedom that he deserves.

Let us know if your class participates by snapping a photo of your students’ letters or cards and sending it to us at [email protected]!