Update 2: Iris is thriving at the Save the Chimps sanctuary in Florida after years of languishing at a roadside zoo. The curious chimpanzee loves exploring the island and is getting stronger every day. These latest pictures show that Iris is blossoming in her new home. 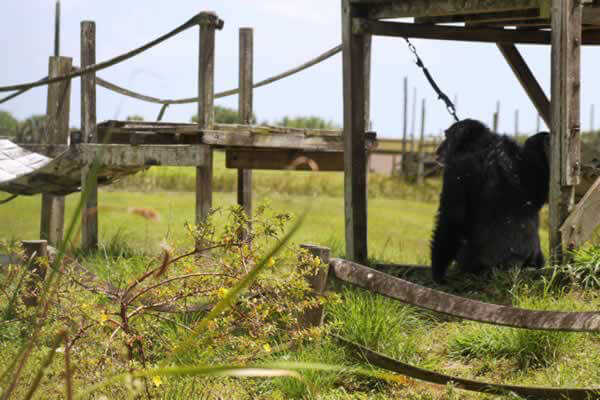 You mean it? This is all mine? 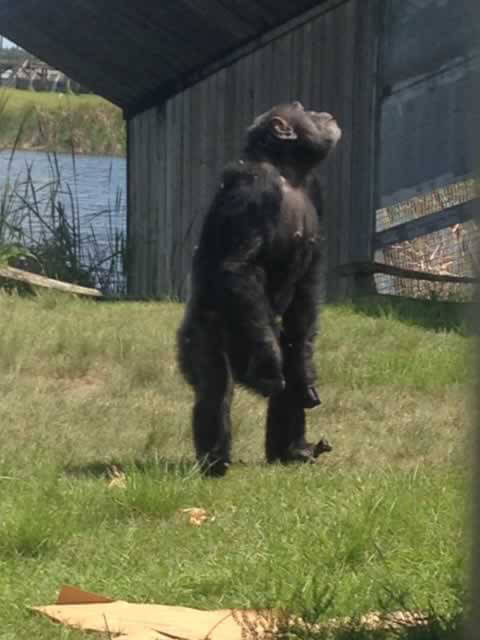 It feels so good to be able to stretch! 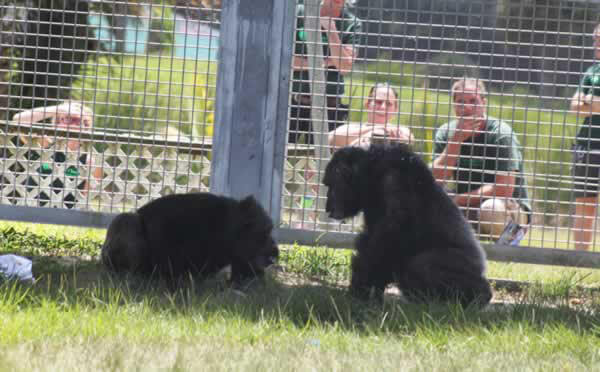 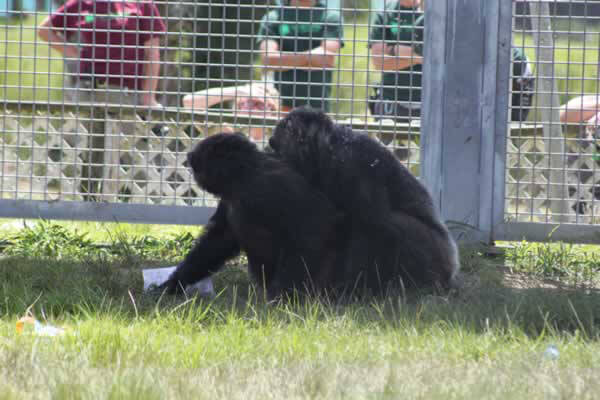 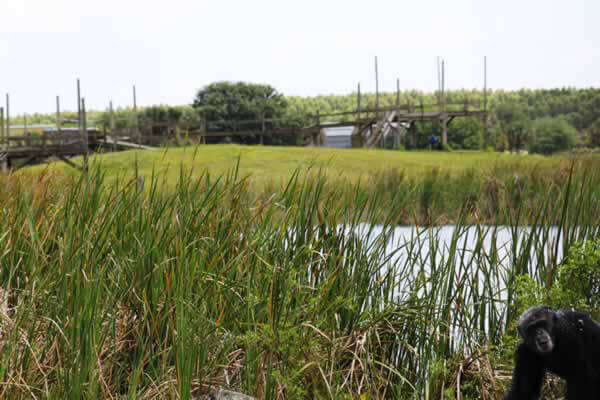 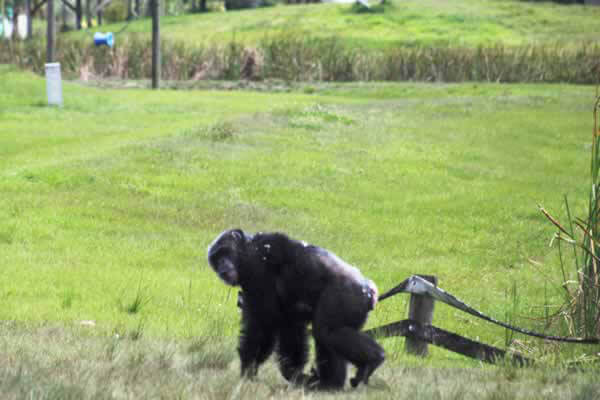 OK, no more time to chat—there’s exploring to do.

Iris didn’t always have room to roam, friends to play with, and access to warm Florida sunshine. Scroll down for pictures of her life before coming to the Save the Chimps sanctuary.

Originally posted on April 9, 2015:
Update: With her initial quarantine period over, Iris was released today onto one of the island habitats at the lush Save the Chimps sanctuary in Florida for the first time, with her trusted friend Abdul. Iris felt grass beneath her feet and sunshine on her back likely for the first time in 16 years—maybe ever. 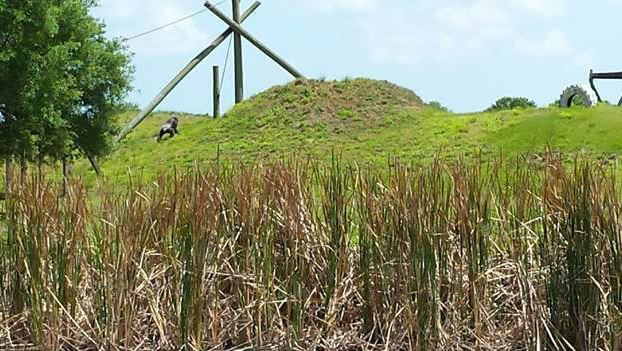 Upon release onto the island, Iris walked right up to island resident Pam and gave her a hug and a kiss, as has become the ebullient chimpanzee’s M.O. (She also hugged and kissed Abdul when they first met.)

After just over a month at Save the Chimps, Iris is already getting some color back in her skin, her eyes have adjusted to the daylight, and her legs are getting stronger with exercise. Most importantly to Iris, she’s making friends! She will gradually be introduced to more and more chimpanzees. If all goes well, she’ll soon be integrated into a new chimpanzee “forever” family.

Imagine being confined in a dark, windowless cell that measures approximately 8 feet by 16 feet, roughly the size of a walk-in closet. Iris didn’t have to imagine it: That’s where the 32-year-old chimpanzee was found at Chestatee Wildlife Preserve & Zoo, a seedy roadside zoo in Georgia.

The cell was only cleaned about twice a week (contrary to instructions by the U.S. Department of Agriculture to clean it daily), so she often lived amid her own waste. Her meals were slid to her through a slot in the wall, as if she were an inmate at a high-security prison. The tiny cell had nothing for her to climb on, and she had no one to play with and essentially nothing to look at except four blank walls. The picture of abject despair, she was often found huddled under a filthy blanket in the unheated cell and smeared her own feces on the cell walls. 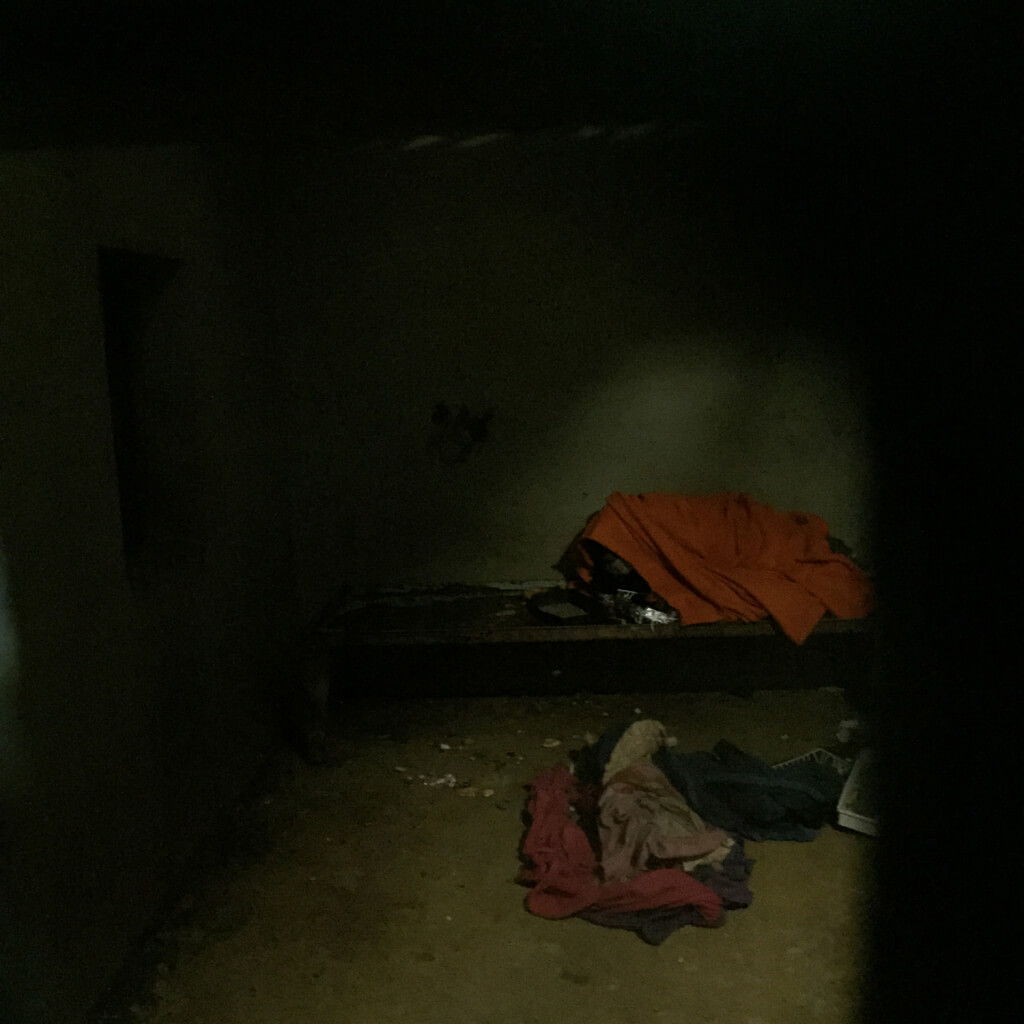 Occasionally, Iris was allowed into a slightly larger concrete cell, but it was found scattered with feces and dead cockroaches, and spiders crawled among the cobwebs on the ceiling and walls.

After years of solitary confinement and deprivation, Iris was a sorry sight. She was pale and overweight, and her legs were underdeveloped, likely from a lack of opportunities to climb or exercise. She was missing her canine teeth, which likely had been pulled out to make her easier to handle. 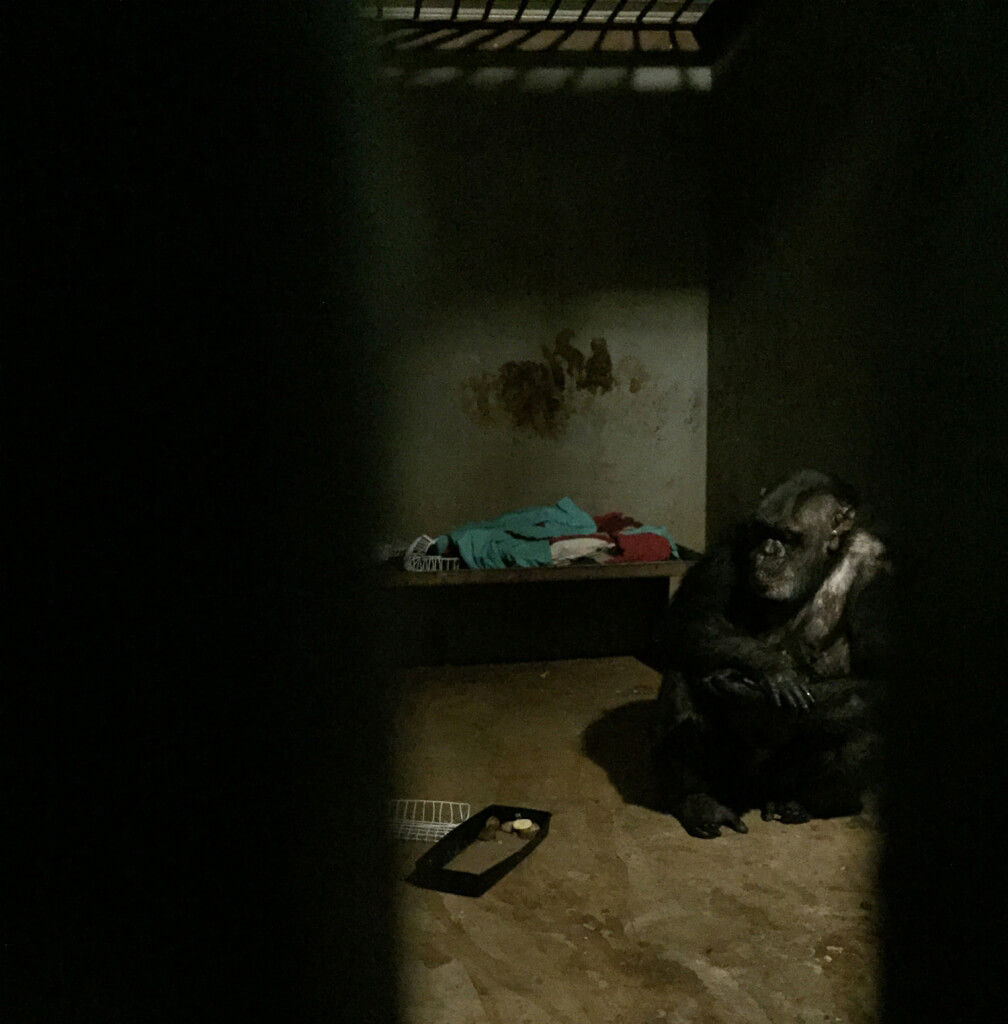 But thanks to a generous PETA member, Iris has seen the last of this hell on Earth. Earlier this month, she was transported to the lush tropical Save the Chimps, an accredited sanctuary in Florida. 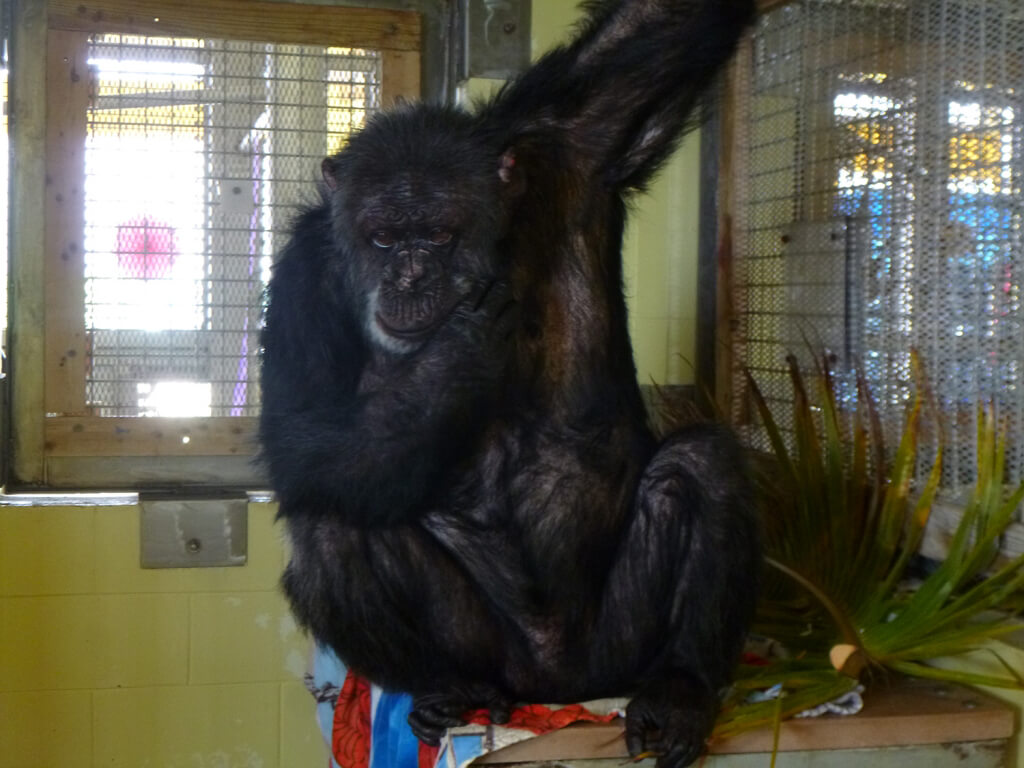 Just days after arriving at Save the Chimps, Iris was introduced to another rescued chimpanzee named Abdul, and they were immediately smitten with each other, panting and hooting with delight, exchanging kisses and hugs, and grooming each other like old friends. Normally, such introductions take months, but for Iris and Abdul, it was love at first sight. Iris continues to be introduced to more chimpanzees and will soon have the opportunity to live on a large island with plenty of trees and structures for climbing and playing. 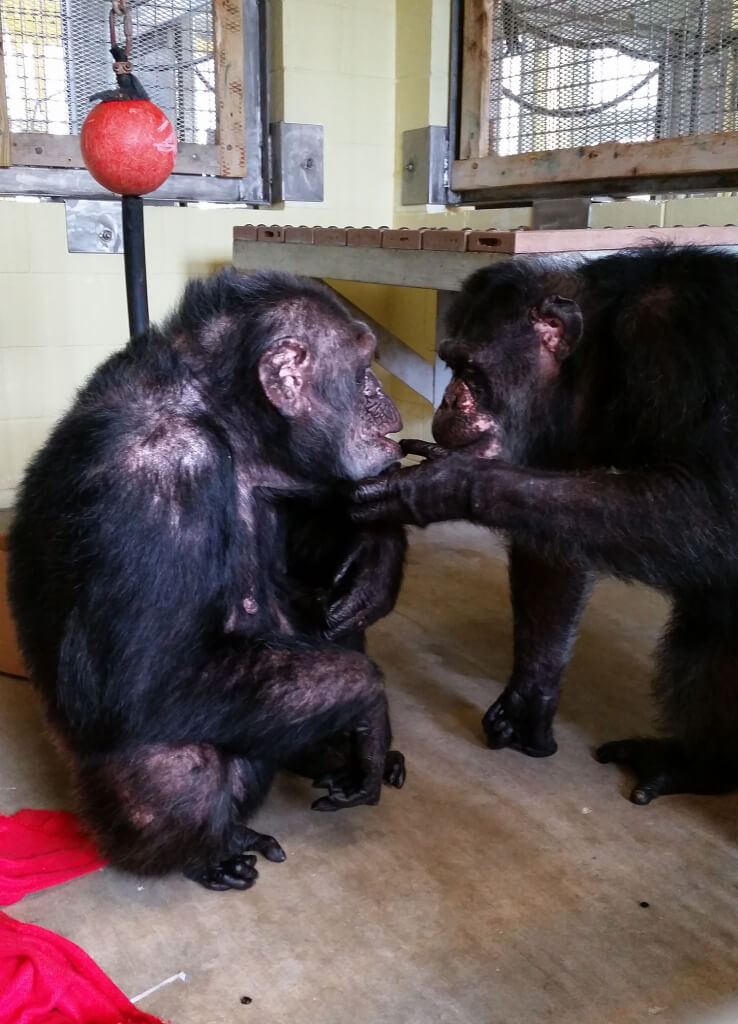 PETA has filed legal complaints with several agencies and called on them to investigate Chestatee’s apparent violations of animal-protection and worker-safety laws.

Boycott all zoos, even ones that misleadingly call themselves “preserves” or “parks.” Roadside zoos don’t have signs out front saying, “Caution: Abused Animals Within.” They are tourist traps that unwitting visitors keep open with their ticket purchases. 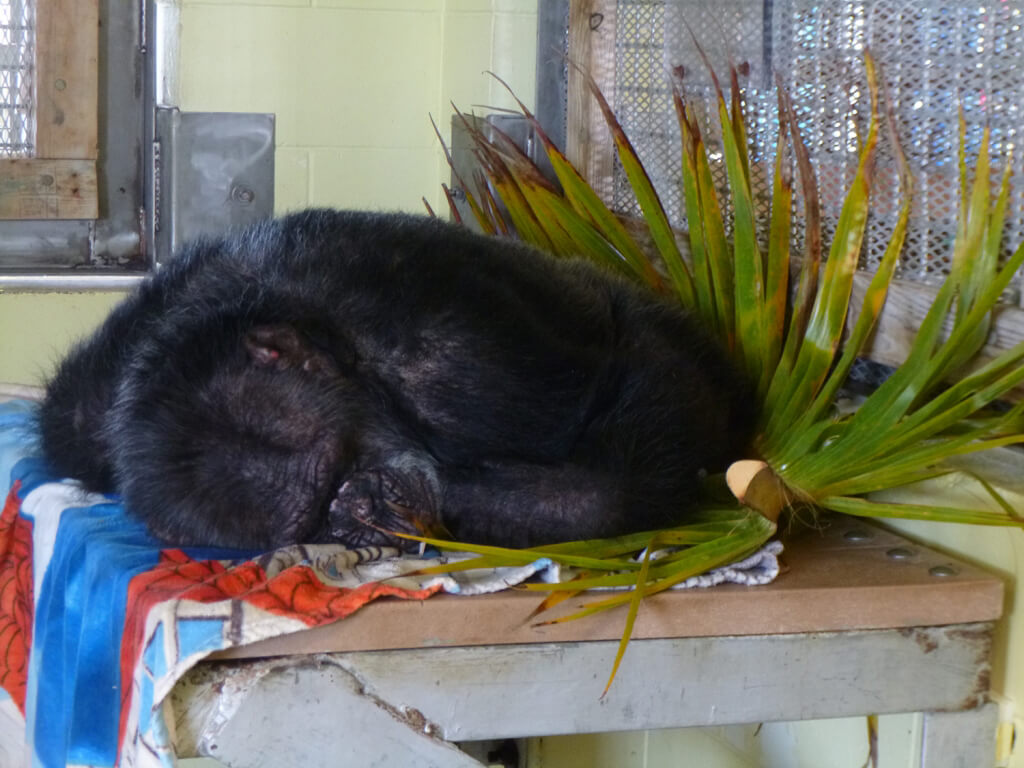