Update: In a huge victory for free speech, Keith Allison has settled his lawsuit against the Green Local School District in exchange for receiving back pay and payment of the American Civil Liberties Union (ACLU) of Ohio’s and the PETA Foundation’s court costs and attorneys’ fees. The school district will also issue a public statement saying that it respects the free speech rights of teachers. With help from the ACLU and the PETA Foundation, Keith is now back at work teaching at a different school in the district.

Here at TeachKind, we know that introducing animal issues to students isn’t always easy, and we admire every single educator who goes above and beyond to teach young people about helping animals. The following post was written by Keith Allison, a teacher in Ohio who faced a worst-case scenario for speaking his mind about animal rights—but that didn’t slow him down. We hope you’ll be inspired by his story and keep fighting for animal rights! 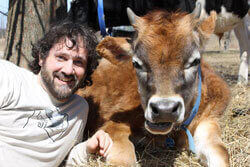 “Our lives begin to end the day we become silent about things that matter.”

King’s words echo in my ears whenever people state how we should be careful when we write or speak about what we truly believe in.

Then it happened to me. I lost my job when I posted on Facebook.

I am an elementary school teacher. I connect with my students and help them find the joy of learning. I love working with them and they know it.

Also, I am a vegan activist. As someone who longs for a better world, I spend much of my free time speaking up in support of peace and compassion for animals and people.

One day, I was riding my bicycle by a local farm and saw an image that really struck me. As a society, we often overlook the fact that for any mammal to lactate, pregnancy and birth are necessary. If we want to drink the milk of a mother cow, we are choosing for her baby to be separated from her, usually within a day of birth.

Individual calf crates, or calf hutches as the industry prefers, are a common housing method. As I passed this farm, rows of opaque crates, where baby calves would spend their short lives in isolation, were visible from the road. I took a photo and posted it on my Facebook page.

I had begun the school year, having been verbally rehired on another one-year contract. Although I was waiting for official approval from the board of education, it never happened.

The owner of the farm had seen my Facebook post and called the superintendent of the school district. Concerned over the complaint, the superintendent pulled my name from the list for hiring approval. Before the week was over, I was removed from my job.

Anytime you speak up for something you deeply believe in, you risk offending someone. However, if you keep silent to avoid causing offense, you have removed yourself from effective social discourse and severely limited your efforts to improve the world. And that we cannot allow ourselves to do.

Change comes from awareness and from open discussion. If we are going to teach about Martin Luther King Jr., and uphold what he stood for, then we have to be willing to allow voices that speak for those who are suffering.  If we want a sustainable future with cleaner air and cleaner water, if we want to preserve our rainforests and feed our hungry, we need to be willing to honestly look at the effects of animal agriculture on our planet. If we are truly going to advocate for change, then we need to be willing to discuss real possibilities for change, not just the ones that keep us comfortable.

Kindness and compassion are not radical concepts, we all believe in them. And it is not unusual to extend that circle of compassion beyond just the human race—whether we include cats, dogs, dolphins or cows.

If, at the end of the day, the biggest complaint about me as an educator is that I have too much compassion and that I use my free time to speak out for love toward all creatures—both human and non-human—then perhaps that isn’t such a bad thing.

We all need to be able to speak out for what we truly believe in.

That’s the only way we will improve the world.

Update: With help from the ACLU of Ohio and PETA, Keith is now back to work teaching students at a different school in the district. This is a big step in the right direction; however, there’s more to be done in fighting for Keith and all teachers who choose to exercise their right to free speech.