Seattle – Right now and for the next month, sightseers aboard the Seattle Center Monorail will get an eyeful of more than just the Space Needle. Ten screens at the Seattle Center station are displaying can’t-be-missed messages calling for an end to cruel monkey experiments, such as those conducted at the University of Washington (UW). The 10 displays follow recent news that animal experimentation is largely to blame for two species of macaques’ new endangered status—highlighting the urgent need for UW to stop using and importing monkeys. 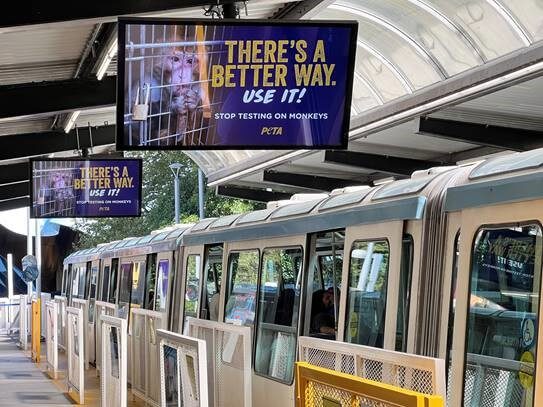 The ads are located at 370 Thomas St., less than a mile away from the Washington National Primate Research Center (WaNPRC) at UW.

“Monorail riders will be horrified to learn that Seattle is home to a secretive underground laboratory that cuts into endangered monkeys’ skulls, sickens the animals with diseases, and takes babies from their mothers,” says PETA Senior Vice President Kathy Guillermo. “UW must shut this hellscape down and stop pushing monkeys to the brink of extinction.”

The WaNPRC is plagued by controversy—including multiple serious violations of federal animal protection laws and state animal health and import regulations as well as disease and toxic waste exposures at its breeding facility in Arizona. Experimenters have left needles, gauze, and other surgical equipment inside monkeys’ bodies, infant monkeys have died from undiagnosed diseases and malnourishment, and staff have admitted to destroying data. These horrors and more are why PETA advocates for a shift away from cruel and archaic experiments on animals and toward humane, modern research methods, as detailed in its Research Modernization Deal.

PETA—whose motto reads, in part, that “animals are not ours to experiment on”—opposes speciesism, a human-supremacist worldview. For more information on PETA’s investigative newsgathering and reporting, please visit PETA.org or follow the group on Twitter, Facebook, or Instagram.